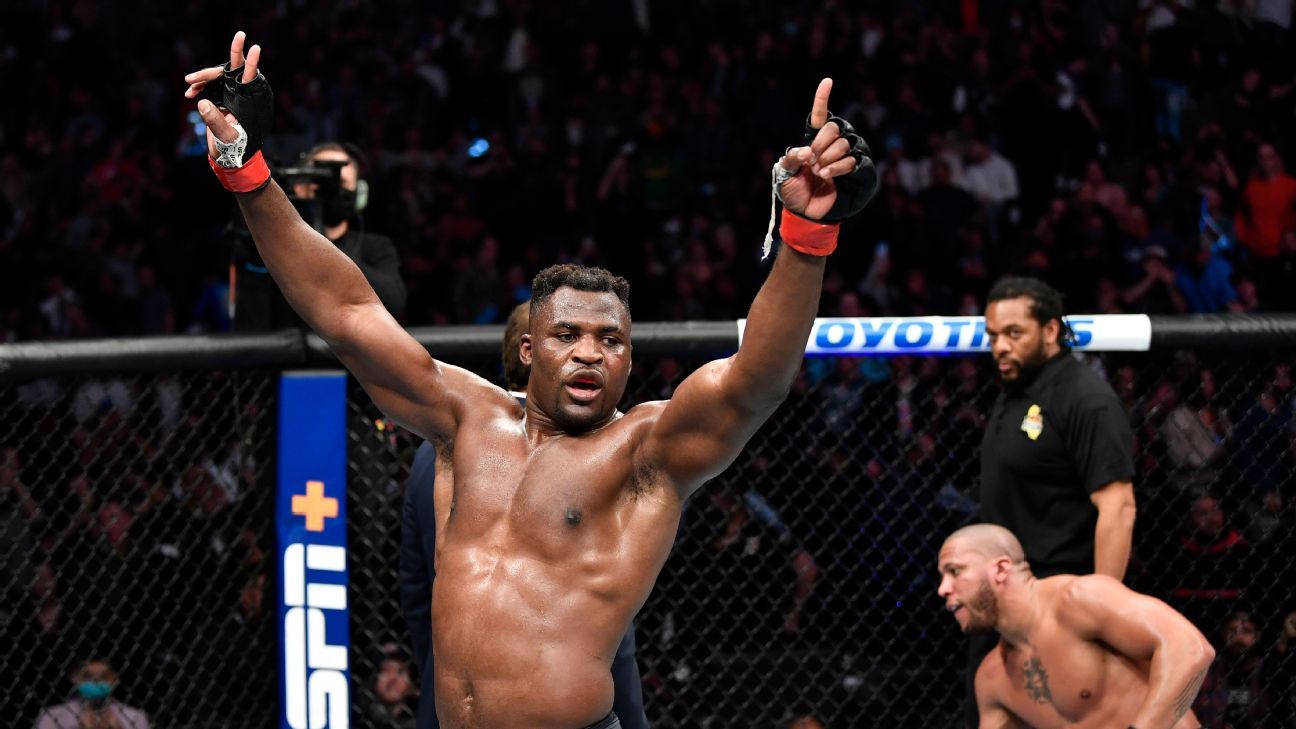 After more than a year of unsuccessful negotiations with the fight promotion, Francis Ngannou is officially no longer the UFC heavyweight champion.

Ngannou (17-3) fought out his UFC contract in January 2022, defeating Ciryl Gane via unanimous decision in what he said was the final fight of his deal. Ngannou injured a knee before that fight and underwent knee surgery two months later — which was unfortunate, but did afford plenty of time for him and the UFC to come to terms.

On Saturday, however, the UFC announced it was moving on from Ngannou, with a heavyweight title fight between former light heavyweight champion Jon Jones and Gane at UFC 285 on March 4 in Las Vegas. UFC president Dana White said he offered to make Ngannou the “highest-paid heavyweight in the history of the company,” but it wasn’t enough to keep him.

Ngannou told ESPN on Sunday he does intend to comment on the matter, but not at this time.

There will be a lot to discuss around this situation, especially if and when Ngannou shares his side to the failed negotiations. For now, let’s look at the possibilities for his fighting future.

Boxing: Could Ngannou soon face off against the ‘Big Four’ heavyweights?

Ever since Ngannou shared a ring with Tyson Fury following Fury’s win over Dillian Whyte in April, it has appeared to be a fait accompli that we’ll one day see Ngannou lace up boxing gloves.

One reason, of course, is that boxing offers its fighters far more money than MMA. But there’s another reason dearer to Ngannou’s heart: a childhood dream. Growing up in Nigeria watching Mike Tyson, Ngannou said he long envisioned the day he, too, would win the heavyweight championship in boxing.

That may appear to be a pipe dream for a 36-year-old who has never boxed professionally, but if Ngannou truly wants to pursue that path, he’ll have plenty of options. After all, he’s one of the biggest combat sports stars and is free to do as he pleases. And in the past, he has stated that his next MMA contract must allow him the flexibility to box.

“That option, boxing, is always in the back of my pocket,” Ngannou said following his win over Gane last year. “It’s something I must do before the end of my career.”

Hardcore Fighting Championship promoter Anatoly Sulyanov extended a $3 million offer via Instagram on Sunday for a March 18 fight in Dubai. Plenty of more offers are sure to come Ngannou’s way from boxing promoters big and small.

Suppose he truly wants to establish himself as a heavyweight contender and give himself a chance to be taken seriously. In that case, he could take a few tuneup bouts where he’s paid handsomely against light competition as he builds toward a superfight with the “big four” of Fury, Oleksandr Usyk, Deontay Wilder or Anthony Joshua.

And then there’s always the exhibition route, which has gained popularity in recent years, with everyone from Floyd Mayweather to Manny Pacquiao racking up millions for fights that aren’t sanctioned and offer little risk. At Fury’s postfight news conference following his rendezvous with Ngannou, he swore that he would one day meet the UFC champ in an exhibition boxing match.

Ngannou could even meet his idol, Mike Tyson, in such a format if he wishes. The money will be there.

The third route available to Ngannou is to head straight into a massive-money showdown with Fury, Joshua or Wilder without testing the waters first. Ngannou would have little chance to win — and a few warmup fights might not change that — but the timing could prove difficult depending on when he’s ready to fight as he recovers from knee surgery.

Fury is closing in on a deal with Usyk for an undisputed heavyweight championship fight in the spring, while Joshua is slated to return on April 1. Wilder is likely to meet Andy Ruiz in the first half of the year, but there’s no deal yet. If Ngannou is searching for such a marquee fight, he’d likely have to wait until the second half of the year.

Whatever path he chooses, even if it’s to continue competing in MMA, it seems likely that Ngannou will one day soon make his pro boxing debut.

“Francis is very serious about boxing — that was his first dream,” Ngannou’s manager, Marquel Martin, previously told Sky Sports. “That’s what he left Africa to learn how to do. Not MMA.” — Coppinger

If Ngannou is to continue in MMA, the PFL would be the favorite to land him. The company is highly committed to splash signings. Look no further than the deal it signed earlier this year with influencer-turned-professional boxer Jake Paul to compete in MMA. The PFL is not just in the business of signing free agents; it’s been ultra-aggressive in doing so, especially for more prominent names.

Get your favorite live sports, stories and originals with ESPN+, Disney+ and Hulu. Upgrade to a Disney Bundle plan and start streaming something for everyone today!

In addition to signing Paul, the promotion also announced a new “super fight division” for fighters like Ngannou. The company’s bread and butter is a regular season and playoffs format, but it has created this division to sign established stars for PPV events. Ngannou isn’t necessarily a superstar in the same sense as Paul or Nate Diaz, another free agent the PFL has its eye on, but he’s undoubtedly a PPV draw.

The PFL posted a very cryptic tweet on Saturday just as news of Ngannou’s free agency became public. In a picture of his family that Ngannou posted to social media earlier this month, one of the women was wearing a PFL shirt. So, there has been some teasing about this possibility, but that’s all it is now.

If Ngannou did sign with the PFL, potential opponents include Ante Delija, Bruno Cappelozza and Renan Ferreira. — Okamoto

Bellator: Could we get a dream match between Ngannou and Fedor?

The PFL wasn’t the only MMA promotion to publicly acknowledge Ngannou’s free agency. Bellator president Scott Coker republished an article from February in which he expressed interest in working with Ngannou if he left the UFC. Bellator could be a landing spot for Ngannou, although the company last promoted an event on PPV in 2017.

In Bellator, potential opponents include Ryan Bader and Cheick Kongo. In an all-time twist of irony, there’s a world in which heavyweight legend Fedor Emelianenko, who is expected to retire after a scheduled heavyweight title fight against Bader next month, decides to stick around for one more against Ngannou. Emelianenko also infamously spurned offers from White to sign with the UFC in 2009.

That’s a nice thought, but a very unlikely one. Still, Bellator will at least want a meeting with Ngannou, and like the PFL, it also just showed its appetite for locking in expensive talent. The promotion just re-signed former featherweight champion AJ McKee to a multiyear deal, which couldn’t have been cheap. — Okamoto