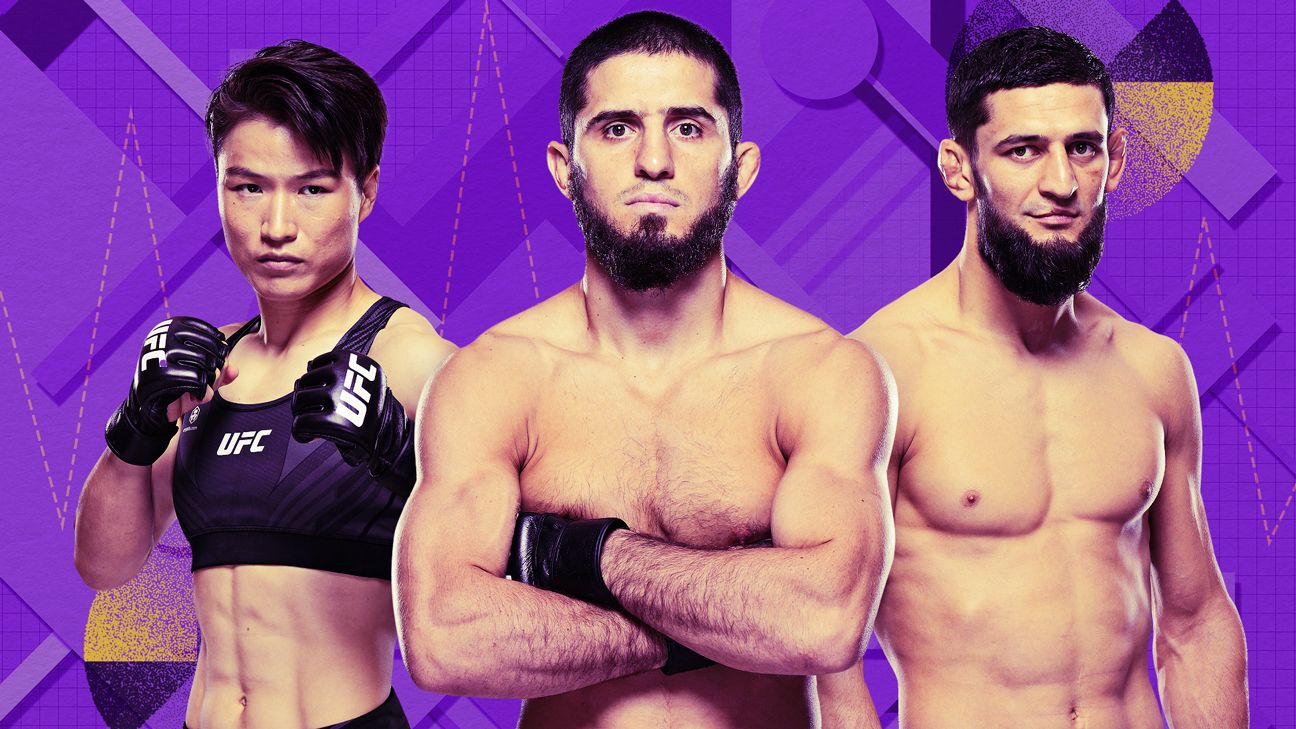 The 2023 MMA calendar gets underway this weekend, and it intensifies next week when UFC 283 is headlined by a pair of championship fights. But a truly game-changing moment for the sport arrives next month in a collision of ESPN’s No. 1 and No. 2 pound-for-pound fighters.

When UFC men’s featherweight champion Alexander Volkanovski challenges Islam Makhachev for the lightweight title at UFC 284, it will be a rare superfight between belt holders at the top of their games. It also will be a meeting of the top two fighters in ESPN’s 2023 MMA Rank, an annual effort to project which fighters will have the best year.

The top 10 of this year’s MMA Rank includes not just dominant longtime champions but some newly crowned champs and two who’ve recently been dethroned. There’s also a fast-rising crowd favorite and title contender as well as an all-time great who is expected to return to the Octagon after a nearly three-year absence. Their recent resumes may all read differently, but every one of these fighters is in position to create a golden future. This could be their year.

Brett Okamoto and Jeff Wagenheim offer up what may be in store for the top fighters in the sport. Follow the link to each UFC result to watch a replay of that fight on ESPN+.

2023 outlook: A year ago, Pereira was barely on the radar, with just one UFC win and five career MMA fights. But a lot has changed for the former kickboxing world champion. He now sits at the top of the middleweight division after knocking out Israel Adesanya in November — his third win over Adesanya, counting their time in kickboxing. Beating “The Last Stylebender” in the Octagon shook up MMA, and now Pereira faces the test all new champs do: Can he defend his belt? In the Brazilian’s case, will it involve another matchup with Adesanya, or will this year bring new challenges — Robert Whittaker maybe, or Khamzat Chimaev? — Wagenheim

2023 outlook: Zhang is back on top of the strawweight division, a spot she appeared to have locked down when she dethroned Jessica Andrade in just 42 seconds in 2019, then successfully defended against the face of the 115-pound division, Jedrzejczyk. But then, Zhang was herself dethroned by Rose Namajunas and fell short in a rematch. She finally got the belt back in November in a dominant submission win over Carla Esparza, and the road ahead could be paved in gold for Zhang in perhaps the deepest division in women’s MMA. — Wagenheim

2023 outlook: Who knows? Do even Ngannou and the UFC brass know what’s in store at this point? Will the heavyweight champ re-sign with the UFC and defend his title against former light heavyweight GOAT candidate Jon Jones in the biggest MMA fight in years, if not ever? Or will Ngannou decide the UFC’s contract terms are too restrictive and move on from the Octagon? This year could swing in wildly different ways for Ngannou. If he does remain with the UFC, though, Ngannou would appear to be in a position to have his highest-profile year yet. — Wagenheim

2023 outlook: As of the first day of this year, Jones had been out of action for 1,058 days, which is just short of three years. And when he returns, he will do so in a new weight class in a bulked-up body he’s yet to take for a test drive. If you think all that adds up to a task too daunting for a fighter to overcome, you might want to watch some videos to remind yourself of how special Jones has been. We’ve been waiting for years to see how Jones would look at heavyweight, a division where he won’t be the larger guy in the cage. If Jones’ debut is against Ngannou, it will be the biggest fight this sport has seen in a long time, if ever. — Wagenheim

2023 outlook: Adesanya is in a challenging position. Literally. After ruling the middleweight division for three years, he lost the belt in November to Pereira and now is one step down the ladder — with a weighty chip on his shoulder. The knockout loss to Pereira was Adesanya’s third defeat against the explosive Brazilian, with the first two coming in kickboxing. “The Last Stylebender” is in a deep hole in his rivalry with the new champ, and it’s going to be interesting to see how Adesanya handles a potential fourth matchup, if that’s the UFC’s next move. — Wagenheim

2023 outlook: Usman enters 2023 in one of the most intriguing positions of any fighter on the planet. A mere five months ago, Usman was less than one minute away from beating Edwards, further cementing himself as the best fighter in the world and tying Anderson Silva’s historic mark of 16 consecutive UFC wins. Of course, we all know one kick from Edwards changed that. Now, he’ll go into this year expected to face Edwards in a rematch in March in London. The difference between a win and a loss in that fight is massive for Usman. Even after all he’s done, this year will go a long way in defining his career. — Okamoto

2023 outlook: There’s a good chance that come December, we will all look back and say Chimaev was the most obvious candidate ever for Fighter of the Year. This will mark Chimaev’s fourth year in the UFC, and it’s blatantly obvious the time has come to see him in a championship bout and test the limits of his stardom. He’s shown the elements of a UFC champion and an overall superstar. If he’s active and does in 2023 what he’s done in the previous three years, Chimaev will be one of the biggest names in the sport by year’s end.— Okamoto

2023 outlook: If 2022 felt like business as usual for Shevchenko, 2023 could be much more. In some ways, Shevchenko is a victim of her success. She’s been so dominant, it’s difficult for the sport to truly get up for her fights, as they can often feel like foregone conclusions. That could change in 2023. Zhang has stated that she wants to move up at some point. A potential trilogy against double champ Amanda Nunes feels possible. Taila Santos has a case for a rematch after fighting Shevchenko closely last June. And France’s Manon Fiorot looks like a real problem for the rest of the division. Shevchenko has challenges in 2023. — Okamoto

2023 outlook: For Volkanovski, 2023 is about greatness. He’s already a UFC champion and building his case as the greatest featherweight of all time. No one asked Volkanovski to seek a second UFC title. The UFC and his team would have been just fine had he spent this year focused on defending his 145-pound title. But Volkanovski wants a legacy, and he’s accepted that risk. Yes, moving up a weight class comes with great rewards, but the lightweight he must go through at UFC 284, Makhachev, represents a serious risk. If Volkanovski pulls this off, it’s nothing shy of historic. — Okamoto

2023 outlook: For the first time in his UFC career, Makhachev won’t have to worry about finding opponents in 2023. The dominant lightweight has been heavily avoided since he signed with the UFC in 2015, but holding a championship belt will change that. Opportunity will be no problem for Makhachev, as long as he continues to do what he’s essentially always done: dominate. A win over Volkanovski at UFC 284 in February would make him the No. 1 pound-for-pound fighter in the world while setting the stage for a monster year in general. — Okamoto

Ismael Bonfim happy to fight on same UFC shows as brother if the wins keep coming
Volkanovski on Islam fight: ‘People have forgotten what I have accomplished’
Mick Maynard’s Shoes: What’s next for Brandon Moreno after winning UFC 283 title unifier?
Henry Cejudo says Merab Dvalishvili bad matchup for Petr Yan: He’ll ‘beat on you like a rat on a Cheeto’
Report: Kelvin Gastelum vs. Chris Curtis Booked For April 8, MMA Fans React