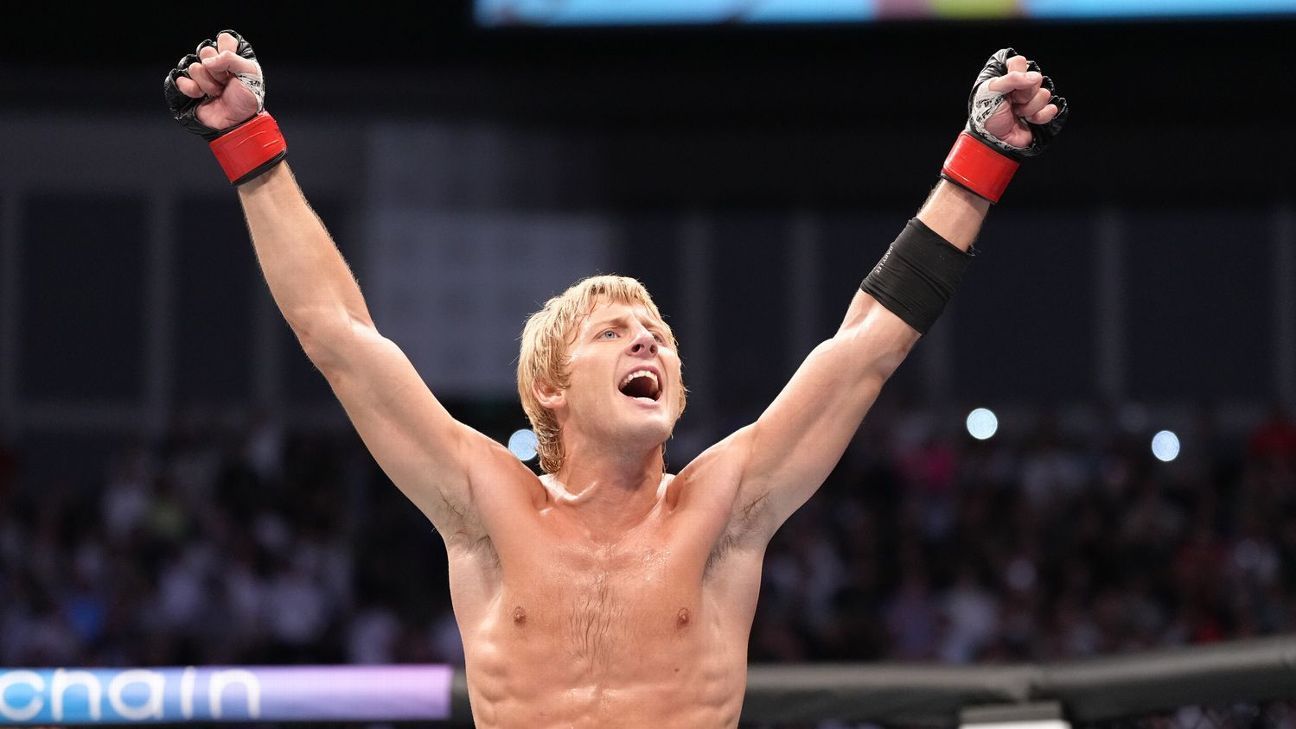 “There’s an enticing aura of unpredictability surrounding the main event of UFC 282.”

That was the opening line in my original draft of this story. I wrote it shortly before Thanksgiving, figuring I’d smartly get a jump on assessing the final Octagon pay-per-view of the year. Who knew the unpredictability I spoke of would come back to bite me weeks before any fight could even take place?

The rematch between Jiri Prochazka and Glover Teixeira for the UFC light heavyweight championship didn’t just fall apart — it imploded. Prochazka injured a shoulder in training, and on Nov. 23, he pulled out of what was to be his first title defense. (Unpredictable.) And because he required surgery and a long recovery time, he opted to vacate the throne. (Even less expected.)

The next unforeseen twist was that Teixeira was also removed from the title fight. UFC president Dana White says he offered the former champ a replacement title bout against Magomed Ankalaev, who was scheduled for the co-main event, and Teixeira turned it down. Teixeira characterizes the exchange differently, saying he accepted the fight but just wanted it to take place a few weeks later so he could prepare for a southpaw. Of course, that would have left the promotion still in need of a UFC 282 headline fight, and in this game, the pecking order sorts out in service to the calendar.

In the end, the UFC opted to elevate the co-main between Ankalaev and Jan Blachowicz to the top of the marquee and put the vacant title up for grabs. The plan C main event might not energize casual fans, but it’s a really interesting fight. Blachowicz is a former champion who has power to be feared at every moment, and Ankalaev, at 18-1, is among the hottest contenders in any weight class.

The light heavyweight title is up for grabs as former champion Jan Blachowicz aims to regain his gold when he faces rising contender Magomed Ankalaev.

Beyond the new main event for the 205-pound belt, plenty of other matters will be settled Saturday at T-Mobile Arena in Las Vegas (ESPN+ PPV at 10 p.m. ET, prelims on ESPN/ESPN+ at 8 p.m., early prelims on ESPN+ at 5:30 p.m.). What this 14-fight card lacks in star power, it makes up for with a deep well of talent and intrigue.

On the undercard are several rising contenders with eyes fixed on a championship belt, and a few fighters who have been title contenders but are now just fighting to hold on to their UFC roster spots.

Here is one observer’s ranking of the top attractions at UFC 282.

It might seem like a no-brainer to rank the main event at No. 1. But before the card’s reshuffling, when this was still the co-main, I had stuck it underneath the battle of unbeatens that’s now ranked right below. What changed? Let’s just say these guys struck gold. They went from being maybe one fight away from competing for a championship — and that “maybe” cannot be dismissed, considering the vagaries of UFC title fight matchmaking — to getting their shot at the belt right away. That ramps up the importance of this contest in a huge way.

If you’re into this sport for the personalities, bigger and bolder ones are lower on the card. But we cannot ignore that Blachowicz is a former light heavyweight champion who, at age 39, is probably taking his final run at the belt (unless he pulls a Glover in his 40s). As for Ankalaev, he is one single tick off the clock from being undefeated. He was well ahead on the scorecards in his UFC debut in 2018 but succumbed to a Paul Craig triangle choke at 4 minutes, 59 seconds of Round 3. How’d he bounce back? Ankalaev has won nine fights in a row, with the past three victories coming against one-time title challengers. The meaty resumes of these two, plus the sky-high stakes, more than make up for any deficiency in star power.

Mitchell is 15-0 and Topuria 12-0, which makes this a must-see attraction. But the appeal goes even deeper. Topuria is coming off three straight knockout wins and, at age 25, is on his way to becoming the future of the featherweight division. Mitchell could steal that thunder here, and if he does, he could step to the mic and say anything — from an unhinged conspiracy theory to announcing another donation to a children’s charity. “Thug Nasty” is an enigmatic character who refuses to be pigeonholed.

OK, now it’s time for some star power. Pimblett is one of the latest to tickle the imagination of MMA fans as part of a Scouser comedy duo with “Meatball” Molly McCann. He’s got a personality as huge as his weight cut. But it’s not just his antics that entertain. Pimblett has won all three of his UFC fights — and has taken home a Performance of the Night bonus check each time. He’ll be tested here by his dance partner, the resilient lightweight Gordon.

Is this too high to rank a matchup between a bantamweight making his UFC debut and one who’s 0-2 in the Octagon? Not at all, because the debutant is about to make history. Rosas turned 18 just last month, so he will be the youngest to compete in the Octagon. Do you remember how you were spending your Saturday nights at age 18? Even if you, too, were regularly getting punched in the face, you probably weren’t getting paid for it and putting your name in a sport’s record book.

A collision between heavyweight knockout artists might very well belong higher on this list, especially if we’re talking about the fresh opening round of a don’t-blink contest in which either man could fall at any moment. Rozenstruik and Daukaus are far from the same fighter, but in terms of results inside the cage, they’re practically twins: Each man has scored knockouts in 11 of his 12 wins, and each is on a two-fight skid and coming off a KO defeat. Who’ll be the last big man standing?

6. Darren Till vs. Dricus du Plessis

Till went into his 2018 welterweight title challenge unbeaten in his 18 bouts. But since getting smoked that night by then-champ Tyron Woodley, Till has just one win in four fights. His most recent two losses have come following a move to middleweight aimed at reinvigorating his flagging career. Now he’s in what has the feel of a make-or-break matchup with du Plessis, who is looking to add the biggest name to his already impressive 17-2 resume.

Saint Preux is on his third opponent, after Alexander Gustafsson and then Philipe Lins dropped out. But the intrigue remains, and here it is: Will OSP finally get the MMA/BJJ world to rename his favorite finish, currently known as the Von Flue Choke? The maneuver bears the name of the first fighter known to utilize this top-side choke, Jason Von Flue, who managed two of them in his career. Saint Preux already has four. Some have called for the move to be referred to as a “Saint Preux Choke,” but I’m with those who’d half-honor the past with “Von Preux Choke.”