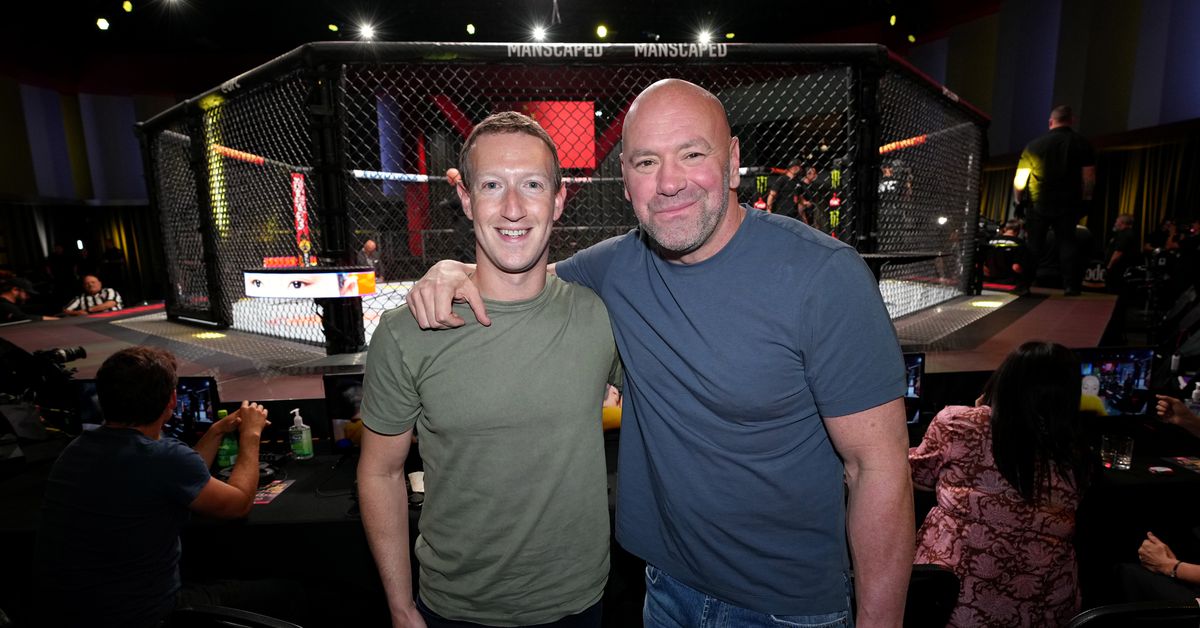 Midway through UFC Vegas 61 fight week this past week, the promotion revealed that the event would be closed to fans and the media. Speculation quickly began to run rampant before media day led one-half of the main event, Mackenzie Dern, to share to the best of her knowledge that Facebook CEO Zuckerberg had “rented out” the UFC Apex facility.

White disputed the claim later that day on Twitter, responding by calling Dern’s comments “total bulls***.” While the UFC boss technically may not have lied about that specific detail, Zuckerberg and his wife were seen sitting cageside in the empty arena and the UFC’s official social media accounts made several posts about the billionaire’s presence at the event.

This whole irregularity led to conspiracy theories running throughout the community, and for Schaub, he’s already found himself under recent fire from White after questioning the legitimacy of all the UFC 279 drama. UFC commentator and friend of Schaub’s, Joe Rogan, later piled on in recent weeks when addressing Schaub’s theory, calling it “dumb” and saying that the former UFC heavyweight “needs a handler.”

“It’s strange to me that it’s okay for Dana to go against his fighters and devalue them and he’s lying or call another guy a f****** dummy because he had a conspiracy about UFC 279 cause there’s some smoke there,” Schaub said on The Schaub Show.

“Dana lies about it then people want to get mad at me, ‘Oh, dude. Come on. You think Dana would actually do that at UFC 279? Brendan needs a handler’ … Do I? Or does your boy need a handler? I’m not the one playing grab-ass with Mark Zuckerberg, letting him rent out [the UFC Apex], shutting it down for his entertainment. You should have ran that by me, right? I don’t need a handler, these guys need a handler.”

White was asked directly about the event’s attendance closure following the final night of Contender Series season 6 last Tuesday. He responded by saying he just felt like giving the media a break and wanted them to relax and enjoy the event with their families. Zuckerberg himself posted a picture alongside the aforementioned Dern on Instagram during fight night with a caption that read; “Excited to see Mackenzie Dern fight tonight in Vegas. Thanks, Dana White for inviting us!”

The show went on as per usual, minus the energy of a tight-knit Apex crowd and backstage scrums for every fight’s winner. In the end, Dern came up short via majority decision against Yan Xiaonan in a back-and-forth battle.

“Somebody should’ve gotten in the ear of Dana and Mark Zuckerberg and been like, ‘Hey, you two rich, privileged f***s, come over here,’” Schaub said. “‘Let me tell you something. Do not ban the media, do not not allow fans to attend this event, it affects the fighters. What’s our first priority here? The fighters,’ That’s what you say, we know you’re lying. Just because this guy is a billionaire and stole a f****** app called Facebook off two twins doesn’t make this guy special. He became a fan last f****** week, quit posting s***. You’re driving away your fanbase.”

Risk. Tito Ortiz reveals why he withdrew from infamous boxing match against Dana White: ‘I was making zero off of it’

I.C.E. Alexandre Pantoja to serve as backup fighter yet again for Deiveson Figueiredo vs. Brandon Moreno at UFC 283

Heck of a Morning. MMA Fighting’s Mike Heck discusses how UFC should book Paddy Pimblett next.

The UFC needs to come to the PNW! I’d love to fight in Portland or Seattle. I was scheduled to fight at the Moda center in 2020 before all the bs

The thing that bothered me most about the Apex’s closure was that the winners had their exposure limited thanks to losing out on their backstage scrums. So, I’m still curious why that couldn’t have still been allowed. During the pandemic, media wasn’t allowed cageside in the Apex and could only be in the media room. The same, theoretically, could have been applied here.

Was it wrong for the UFC to close the Apex to fans and media at UFC Vegas 61?