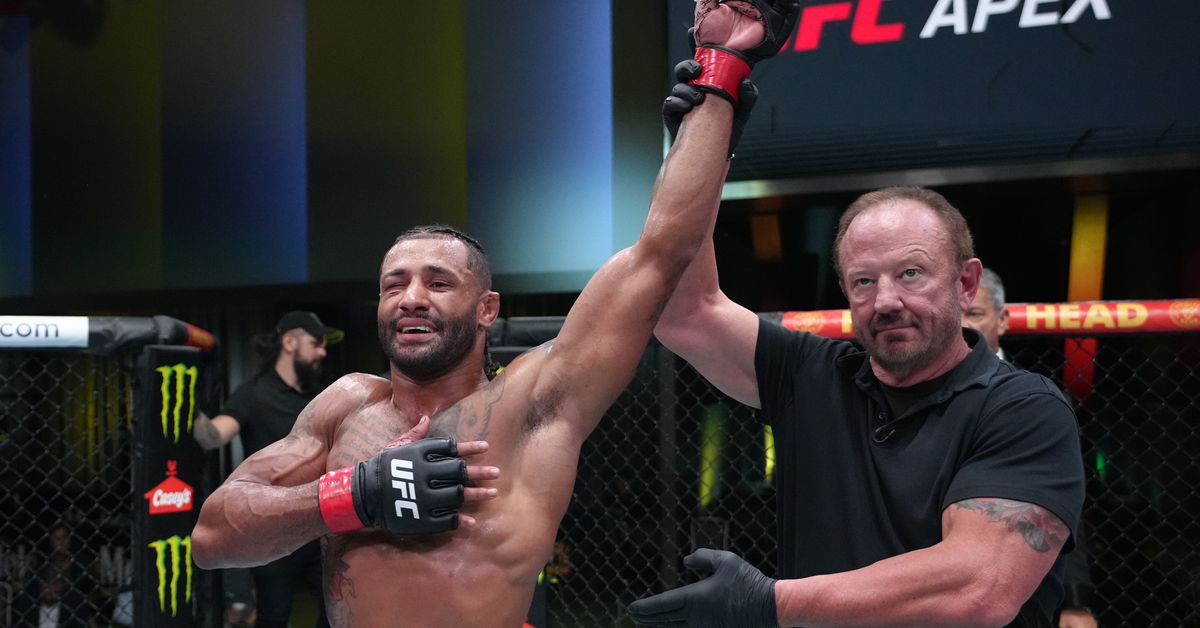 Nearly two years away from action didn’t slow down Mike Davis from picking up a dominant win over Viacheslav Borshchev to kick off the main card at UFC Vegas 61 on Saturday.

While he’s best known for his striking, Davis actually turned to his grappling in the fight against “Slava Claus” as he scored numerous takedowns and essentially mauled his opponent during any of the ground exchanges. Davis did have to stave off a late comeback attempt from Borshchev, but ultimately it was too little, too late.

“I felt pretty good,” Davis said about his performance. “He landed a good shot in my eye so my eye was gone. I had to fight with my eyes closed. I feel like my game’s adapting. I still feel like I’m subpar. I’m thankful to him, he’s the first guy to accept a fight against me.”

The early exchanges were highlighted by a nice uppercut landed by Davis, although Borshchev was happy to respond with some nasty calf kicks. Davis eventually turned to his wrestling to put Borshchev on the canvas, scoring a couple of takedowns as he looked to apply his grappling game.

As the fighters battled for position in the clinch, Davis uncorked a perfectly timed knee that clipped Borshchev and put him on wobbly legs for a moment. Davis continued his assault until landing another takedown, which allowed him to move into the mount.

From there, Davis rained down blows from the top as he looked for the finish, but Borshchev was able to cover up effectively enough to make it to the end of the opening round.

A fast and energetic start left Davis feeling a little lethargic as the fight moved forward, with Borshchev going on the attack with good footwork and better output. Borshchev continued to punish the legs, which complicated Davis’ movement even more, but for all the success he found, the Russian couldn’t stop the takedowns.

Even if he was exhausted, Davis was still able to put Borshchev on his back, move into the mount and start looking for submissions as well as a strong ground-and-pound offense.

With five minutes remaining, Borshchev made one last push for a comeback, cracking Davis with a straight left that connected clean. The punch caused swelling around Davis’ face, which possibly signaled a broken orbital bone, but he simply snatched another takedown.

The mismatch on the ground continued, with Davis outworking Borshchev in every position to close out the fight and get the win.

Erin Blanchfield Names Last Box To Tick Before Being Title-Shot Ready
Michael Chandler: ‘Dustin Poirier Is Losing Sleep’ Over Fouls, Not Me
USADA: McGregor needs to be in pool 6 months
Charles Johnson on Zhalgas Zhumagulov win at UFC Fight Night 215: ‘I felt like I won every round’
Brendan Loughnane on 2022 PFL World Championship fight: ‘That money can change your whole family’s life in one night’