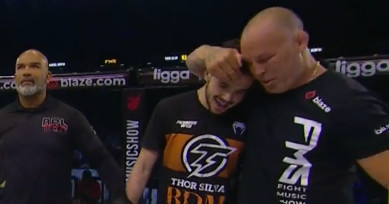 Thor Silva has taken the first step to following in his father’s legendary footsteps.

With his father cageside in his corner, Silva came out aggressive early, dragging opponent Gabriel Bonfim down to the canvas with a single-leg takedown, then unleashing a flurry of punches from mount and back mount to score a first-round TKO finish at the 2:13 mark of Round 1. Video of Silva’s successful amateur MMA debut can be seen above.

The bout wasn’t Silva’s first brush with live competition. The teenager picked up a 30-second TKO victory in his Muay Thai debut in 2019 and has competed in boxing as well.

Speaking to MMA Fighting in August, Silva admitted there is “a little bit” of pressure that comes with being the son of an MMA legend, but that his father struggles with the moment more than he does.

“He gets more nervous than I,” Thor said of Wanderlei with a laugh. “We usually brought something to eat before the events and he always got too nervous and ate the whole thing. I don’t get that nervous when I’m about to fight, I stay calm and relaxed, thinking about what I’m about to do. I don’t think it adds too much pressure, really.”