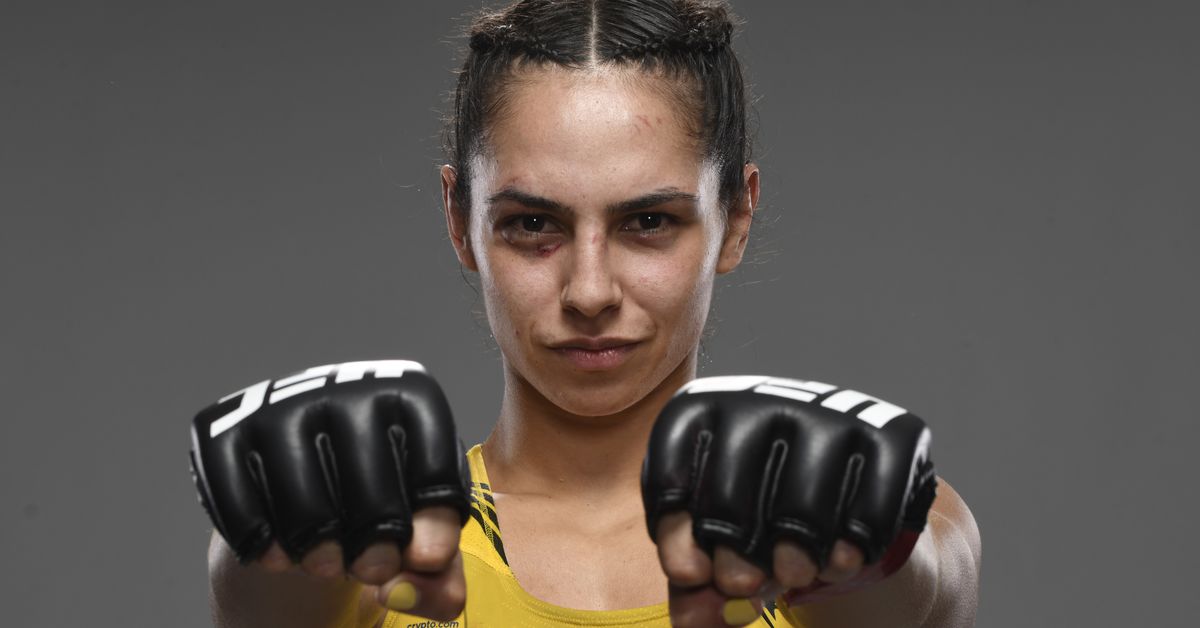 This weekend (Sat., Aug. 6, 2022), Ultimate Fighting Championship (UFC) will return to UFC Apex and Las Vegas, Nevada, for UFC Vegas 59. While the main event of Jamahal Hill vs. Thiago Santos and co-main battle between Vicente Luque and Geoff Neal both seem to promise violence, the rest of these match ups, well … they leave something to be desired. Two Heavyweight contests and two women’s Flyweight bouts? What did the Las Vegas locals do to deserve such punishment? Oh, that’s right, it’s the culmination of the latest season of The Ultimate Fighter (TUF).

LIGHT HEAVYWEIGHT CONTENDERS COLLIDE! Ultimate Fighting Championship (UFC) returns home to UFC Apex in Las Vegas, Nevada, on Sat., Aug. 6, 2022, with a thrilling Light Heavyweight contender bout that will see No. 6-ranked Thiago Santos take on No. 10-seeded Jamahal Hill. In UFC Vegas 59’s co-main event, No. 6-ranked Welterweight contender, Vicente Luque, will lock horns with No. 13-seeded contender, Geoff Neal, in a pivotal match up. Also on the card, The Ultimate Fighter (TUF) 30 Finale matches are set as Mohammed Usman and Zac Pauga battle at Heavyweight and Brogan Walker and Juliana Miller face off at Flyweight with UFC contracts on the line.

Best Win for Pauga? Markus Perez For Usman? Eduardo Perez
Current Streak: Pauga debuts at 5-0, whereas Usman technically lost his last bout but has won two in a row on TUF
X-Factor: This is low-level Heavyweight MMA
How these two match up: Hopefully, this ends quickly.

Training out of Elevation Fight Team, Pauga has actually spent a majority of his career at 205 pounds, jumping up in weight for his opportunity on TUF. Among the big men, Pauga’s speed was a significant advantage, and he showed a fair bit of craft to his kickboxing. Nigeria’s Usman, meanwhile, will enter this bout as the larger and more experienced man. A Professional Fighters League (PFL) veteran, Usman has finished his wins via a nice mix of strikes and submissions, proving his comfort in all areas.

This very much appears to be a battle of technique vs. strength. Pauga is significantly more refined on his feet, but Usman is the actual Heavyweight, and if he gets on top, it’s going to be a big problem.

Ultimately, there’s more positive about Pauga, who at least showed some slickness in his TUF victories. Usman seems too raw to really implement his strength without getting cracked for trying to close the distance, which is odd to say about the athlete who theoretically is the more experienced professional.

Though both women have competed a majority of their careers in Invicta FC, Miller has just three professional fights! Walker, meanwhile, has faced a number of eventual or former UFC fighters, including the aforementioned win over Maverick. The 32-year-old “Bear” has finished a single fight via submission.

When two grapplers collide, the better wrestler usually comes out on top. Since we don’t really know who’s going to win the takedown battle, I’ll side with the more refined specialist. Miller is slick and more dangerous on the canvas, which hopefully will land her in top position one way or another.

Best Win for Sakai? Marcin Tybura For Spivac? Greg Hardy
Current Streak: Sakai has lost three in a row, whereas Spivac won his last bout
X-Factor: How will Spivac perform after a difficult string of losses?
How these two match up: A striker vs. grappler match up between two established UFC veterans? Awesome!

Sakai is in the unusual — and very Heavyweight — position of being a knockout artist who’s not really an elite striker. He’s big, tough, and hits hard, but Sakai’s last three losses have involved getting smoked by more skilled kickboxers that aren’t afraid of his striking. Spivac is a bit more of a wild card. The 27-year-old “Polar Bear” is still a developing fighter, and his striking has definitely improved since his UFC debut. He’s much more comfortable as a grappler, however, which can be a problem if his takedown game doesn’t get rolling.

This is the type of match up that Sakai steam rolls opponents. In general, his takedown defense is solid, good enough to at least rebuke the Marcin Tybura and Blagoy Ivanov’s of the world. Spivac’s throws have a unique funk and flair, but on the whole, he seems to fit into that category nicely.

If this is to be a kickboxing match, it’s unlikely to end well for Spivac. His jab is coming along, but Spivac doesn’t yet have the defense to win a three round scrap with someone like Sakai, nor is he all that powerful with his own shots. As a result, Sakai will probably find great success in walking the Moldovan down and putting on the hurt … so long as these recent losses haven’t taken a toll on his confidence.

Best Win for Lipski? Luana Carolina For Cachoeira? Ji Yeon Kim
Current Streak: Both women won their most recent fight
X-Factor: Cachoeira has perhaps the worst technique I’ve ever seen inside the Octagon
How these two match up: I predict a brawl!

Former KSW champion Lipski has a background in Muay Thai. Unfortunately, she’s yet to really live up to the initial expectations, struggling to build much momentum at 125 lbs. On the whole, her defense just tends to be a bit lacking, particularly on the canvas.

Brazil’s “Zombie Girl” chose an appropriate nickname. Cachoeira is athletic and strong, but she does little more than whip haymakers in the general direction of her opponents. It’s a massive knock on the women’s Flyweight division that she’s somehow won three of her last four. I don’t mean to spoil the prediction before the analysis, but it’s an even bigger indictment of the division that she’s probably going to win here too.

Lipski is the better technical striker by a fair margin, but last time out, Cachoeira demonstrated that raw aggression and athleticism goes a long way against average opposition. What is Lipski going to do if Cachoeira just closes her eyes and swings with elbows? Sure, she’ll probably stick some counters, but “Zombie Girl” is happy to eat them and keep throwing.

That type of chaos is the recipe for unplanned grappling, and Cachoeira’s strength and forward movement likely lands her in top position. If that happens, it might just be game over for Lipski, who’s been pounded out twice before inside the Octagon.

Remember that MMAmania.com will deliver LIVE round-by-round, blow-by-blow coverage of the entire UFC Vegas 59 fight card right here, starting with the ESPN/ESPN+ “Prelims” matches, which are scheduled to begin at 7 p.m. ET, then the remaining main card balance (on ESPN/ESPN+) at 10 p.m. ET.

To check out the latest and greatest UFC Vegas 59: “Hill vs. Santos” news and notes be sure to hit up our comprehensive event archive right here.