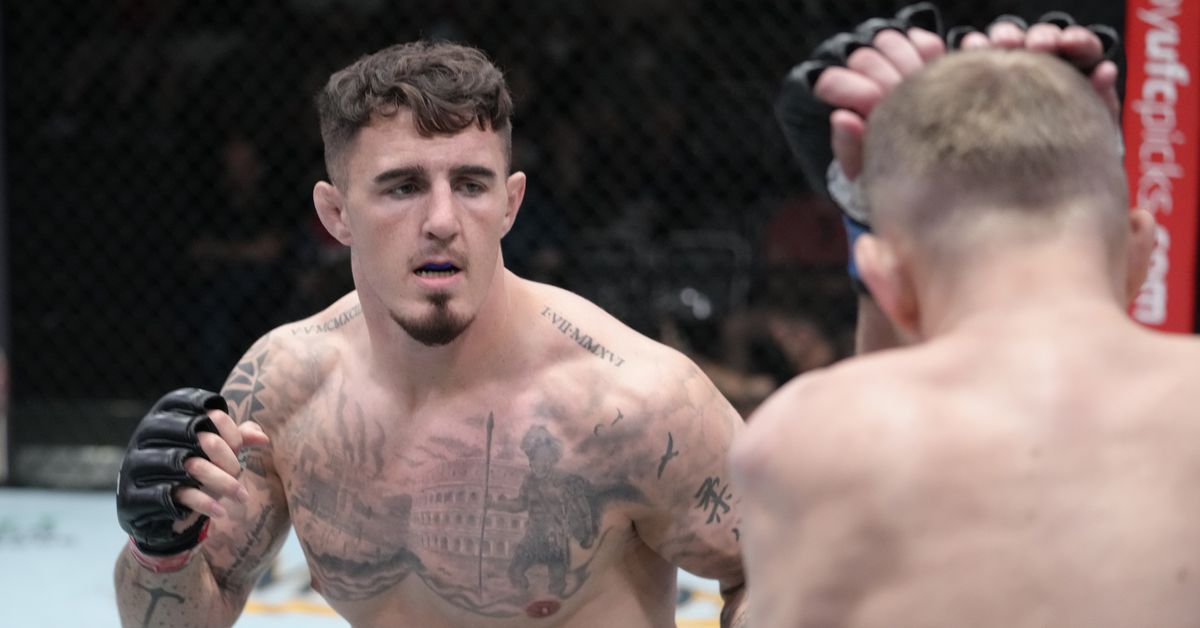 Tom Aspinall cemented his status as one of the heavyweight division’s most intriguing young prospects with his highlight-reel knockout of Serghei Spivak at UFC Vegas 36.

The win pushed the 28-year-old Englishman’s UFC record to a perfect 4-0 with four stoppages, and likely could’ve propelled Aspinall into a fight against a top-10 contender. But Aspinall isn’t exactly jumping at the idea. Instead, he’d rather take his time and slowly work his way up the ranks before jumping into the shark tank that is the top of the UFC’s division.

“I need a lot more experience before I fight them guys,” Aspinall said at Saturday’s UFC Vegas 36 post-fight press conference. “I’m not ready for them guys yet.

Aspinall patient approach has paid off thus far. He dispatched the man ranked directly below in the UFC’s rankings, Spivak, with a thunderous flurry on Saturday and snatched his third post-fight bonus of his four octagon appearances. Afterward, Aspinall already had another name in mind — and true to his words, it was the man ranked directly above him in the UFC’s rankings, No. 12-ranked heavyweight Blagoy Ivanov.

“I just want to fight guys that are around my ranking. I believe in earning your title shot,” Aspinall said. “I don’t believe in the hype train pushing you to a title shot. I believe in earning it, so I want to fight the guy above me. Some guy who just interviewed me, he brought up Blagoy Ivanov — that’s a fight I would love. He’s a very durable guy, I have a lot of respect for him. He’s been around for a long time and he is so, so tough, and I want to see if my power and speed — I want to see how that does against someone like that.”

For what it’s worth, Aspinall is currently the No. 13-ranked heavyweight in MMA Fighting’s Global Rankings. At the time of this writing, both Spivac and Ivanov are unranked.

But Aspinall knows he has time. He’s one of the youngest athletes in the sport’s oldest division in terms of average athlete age, and he’s getting better with every bout. And after fighting all four of his UFC appearances with either no crowd or a limited capacity crowd due to COVID restrictions, he hopes his next fight can be the one that introduces him to the thrills and pressure of competing on the biggest stages in the world in earnest.

“The most people I’ve fought in front of is 1,000, maybe 1,500. So I want that to be the next step of my career, is fighting in front of people, because I don’t want to be getting up to the top 10 and top 5 and I’ve never fought in front of anybody before. So when this London card was cancelled I was upset, because I’m not just in this thing to learn how to win fights and smash people and all that. I’m in this for that as well, but I’m also in this thing to learn about myself, and I don’t know how I’m going to react, so I’d like to do that next.”