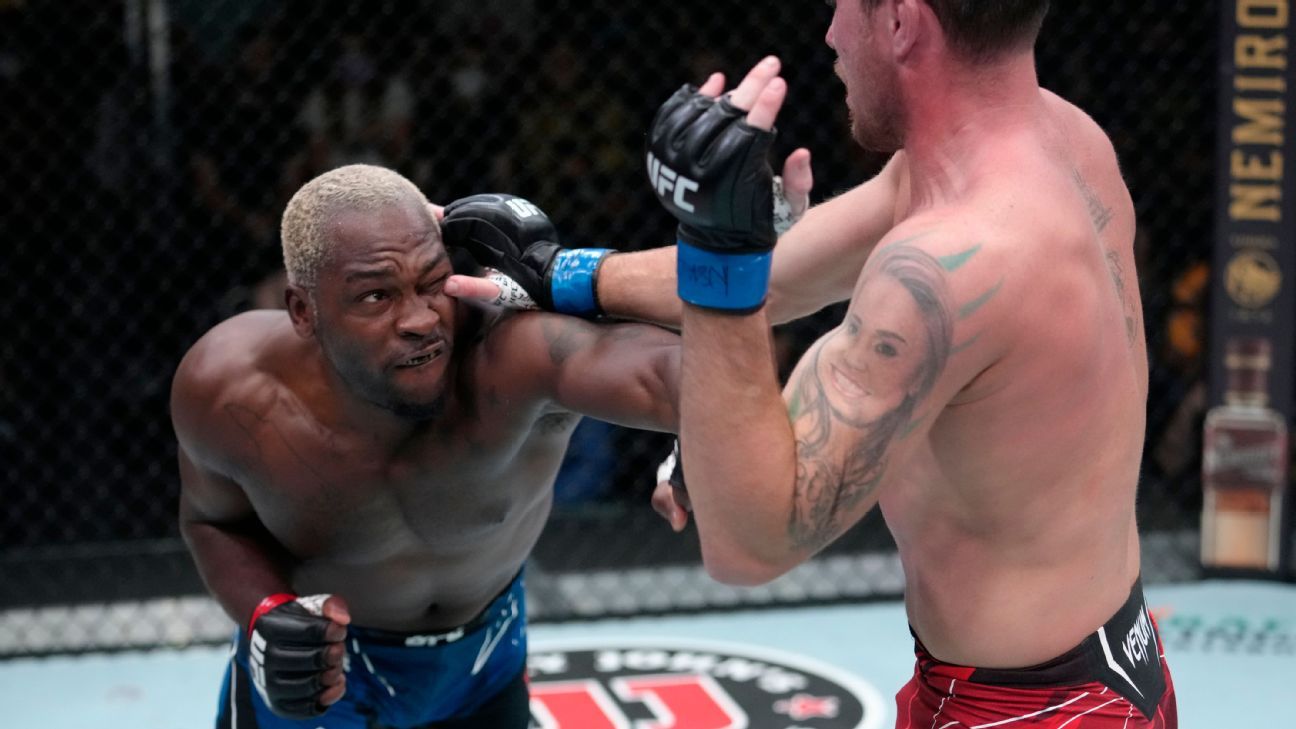 Derek Brunson has fought just about anyone who is anyone in the UFC’s middleweight division. The one thing he had been searching for is that signature victory to push him into the title picture.

On Saturday, he finally got that.

Brunson stopped Darren Till via submission (rear-naked choke) at 2 minutes, 13 seconds of the third round Saturday in the main event of UFC Fight Night in Las Vegas. Brunson used his wrestling to score takedowns in every round, landed big ground and pound early on and then finished with a choke on the mat after Till wobbled him in the third.

It was Brunson’s first submission victory since 2013. Brunson has nine UFC middleweight finishes, the second-most ever behind all-time great Anderson Silva.

“I saw a submission the whole time,” Brunson said in his postfight interview. “I’m a Renzo Gracie black belt. I wanted to put it to use. … I’m really good on the ground, and I want to showcase it.”

Coming in, ESPN had Brunson ranked No. 7 and Till ranked No. 8 in the world at middleweight. Brunson will now join Jared Cannonier as a top contender in the division. Champion Israel Adesanya is likely to defend next against former champ Robert Whittaker.

Brunson called out Adesanya afterward, saying he wants to “rewrite that fight” in a rematch after he suffered a first-round knockout loss in 2018. Brunson said he’d be willing to wait for the winner of Adesanya vs. Whittaker before fighting again, as he prepares “for this really last, long title push I’m trying to make.”

“I can wait until next March or so,” Brunson said in the UFC post-fight show. “I’m not the youngest guy in this division, and I’ve been working really hard for this moment.”

Brunson said his preparation for Saturday’s fight was especially difficult after both of his parents were hospitalized with COVID-19 during his camp.

“She was close to dying,” Brunson said of his mom. “This camp had a lot of adversity.”

In the third round, Till started getting off again with his one-two combos, wobbling Brunson briefly with one. But Brunson went back to his wrestling, took Till down again, got his back and finished the fight.

Brunson (23-7) is in the midst of the best run of his career. He has won five straight, all as the betting underdog, according to ESPN Stats & Information research. Coming in, he defeated Kevin Holland by unanimous decision in March.

A North Carolina native who fights out of Sanford MMA in Florida, Brunson, 37, has won seven of nine overall and has fought a who’s who of the division over the past nine years, including Adesanya, Whittaker, Silva and Yoel Romero.

Till (18-4-1) has lost four of his past five fights. In his previous bout, he lost a very close unanimous decision to Whittaker in July 2020. He was coming off recovery from a broken collarbone.

A Liverpool native, Till, 28, won his UFC middleweight debut against Kelvin Gastelum at UFC 244 in November 2019. “The Gorilla” is a former title challenger at welterweight, falling to Tyron Woodley in 2018.