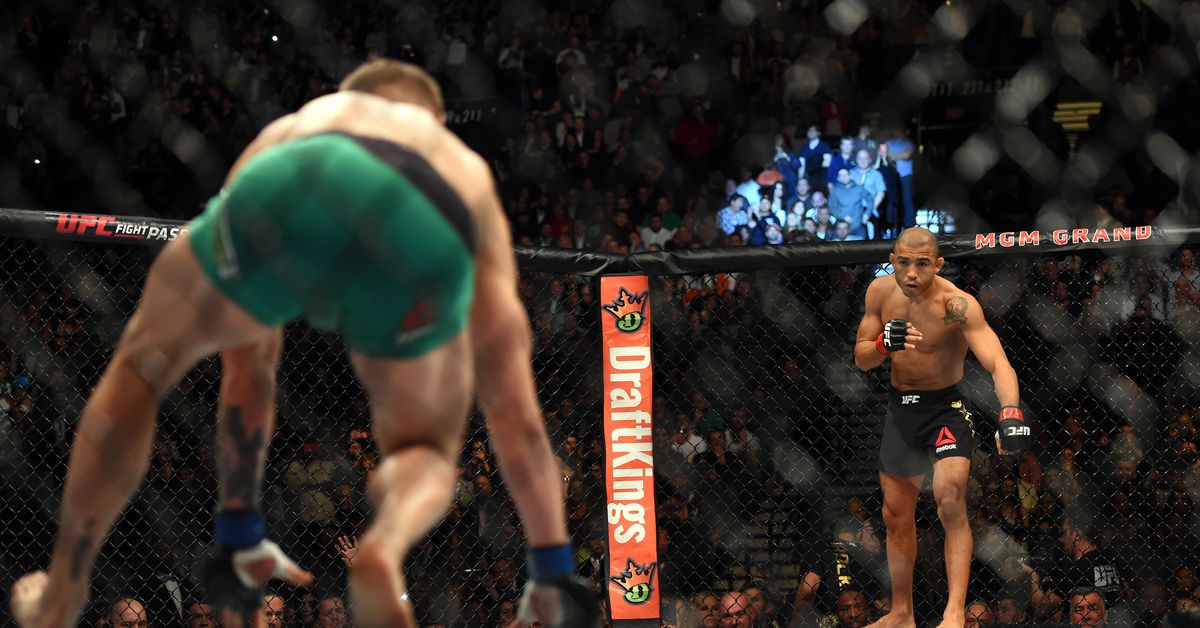 Conor McGregor’s 13-second knockout win over Jose Aldo has to rank highly in the history of the sport’s greatest win. After years of buildup and a decade of dominance, the brash Irish athlete sparked the legend with essentially his first punch of the night, ending the rivalry in an instant.

Immediately afterward, Aldo dedicated himself to earning a rematch, picking up an interim title in the process. Unfortunately, McGregor was on the hunt for a second title, further superstardom, and his biggest paychecks yet. Aldo continued to fight the best at Featherweight for another couple years, before relocating to 135-pounds, where he’s now a top contender.

Safe to say, McGregor — who continually flirts with a Welterweight move — fighting Aldo a second time is extremely unlikely. Given some distance between their feud, both men have been increasingly respectful towards the other.

In fact, McGregor now says he ‘would have loved’ an Aldo rematch. The time has passed, but it’s definitely a different tune than when the rematch would have actually made sense.

“What a warrior that man is. It was an honour to share the octagon [with him].

“I would’ve loved to have do it again. He deserved more, I thought. 1/2

“Good to see Aldo had a good win the other week,” McGregor began. “What a warrior that man is. It was an honor to share the Octagon. I would’ve loved to do it again. He deserved more, I would have thought. But, a lot of respect for Jose Aldo and the Brazilians.”

Chalk this one up as a missed connection.

Instead, Conor McGregor will likely continue chasing a fourth match with Dustin Poirier, though the merits of that tetralogy are very much up for debate.

One week into awkwardly plugging myself, and I’d like to send a major thanks to the 45 (at this time of writing) people who have supported the cause. Glad to have you on the team, and there’s still room on board!

Kevin Lee is still optimistic about his future following a tough loss.

Speaking of UFC Vegas 35, Anthony Pettis won big on his longtime team mate Gerald Meerschaert, who put on his best performance in ages!

Amanda Nunes vs. Julianna Pena has been officially rescheduled for UFC 269.

Please keep Tony Ferguson out of the boxing ring.

It’s always fun when the big lads bring the cage/ring crumbling down around them.

After a 2 hour delay – Molina got the victory

I’ll admit, Francis Ngannou’s wind up while warming up to throw the first pitch had me nervous …

Do my eyes deceive me or is this a clip from the legendary SUPER FIGHT LEAGUE! At any rate … TIMBER!

The rare no-arm guillotine from fully closed guard, which feels like a throwback submission nowadays:

Perfect timing on this jump knee!

This video went fairly viral over the weekend, so fair chance some readers have seen it, but if not … very appropriate for this column!

Midnight Music: Kanye’s new album Donda is finally available on streaming, but it’s also 27 songs long, so I don’t want to pretend I have a complete impression just yet. If nothing else, it’s far better than Jesus Is King!

Modestas Bukauskas books return at UFC 284 in Perth vs. Tyson Pedro
Sanchez Huge Underdog Against Trout
Conor McGregor gets offer to coach The Ultimate Fighter: ‘I like it’
Beneil Dariush Claims UFC Targeting May Clash vs. Charles Oliveira
Report: Sterling-Cejudo Headed To UFC 287 In April