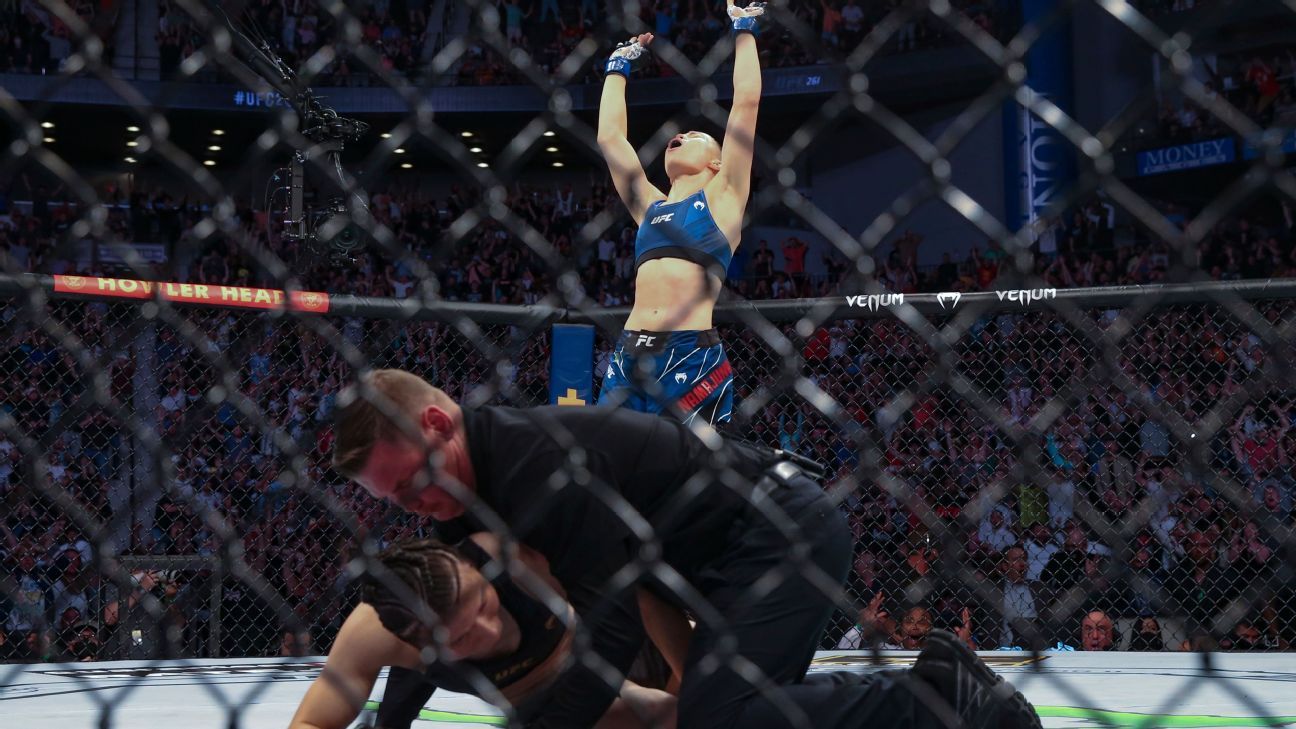 September’s UFC calendar kicks off with a key clash between middleweight contenders Derek Brunson and Darren Till. Brunson has won four straight fights since a 2018 loss to Israel Adesanya, and a win against Till could put him one fight away from his first championship opportunity in the UFC.

Till already has had one shot at a UFC title, albeit at welterweight, and since losing that title fight to Tyron Woodley, he has also had losses against Robert Whittaker and Jorge Masvidal. Is it time to write off Till as a legitimate title contender, especially if he loses to Brunson?

UFC 266 will close out September’s action in the UFC, and the card headlined by Alexander Volkanovski vs. Brian Ortega will feature a bantamweight clash between Marlon Moraes and Merab Dvalishvili. Moraes, a former title contender, is just the kind of name Dvalishvili, a winner of six straight in the UFC, needs to enter an increasingly crowded and competitive top tier of potential bantamweight title challengers.

Derek Brunson carries a four-fight winning streak into Saturday’s fight against Darren Till, as both UFC middleweights angle to put themselves directly into the title picture

Giga Chikadze has intentions of making that sort of move at featherweight, and his knockout win over Edson Barboza on Saturday will certainly help in that regard. But that win pales in comparison to what beating former champion Max Holloway, whom Chikadze called out for the second straight time after a victory. But does that fight make sense for both of them?

Finally, on that same UFC Fight Night broadcast on Saturday, we learned that Rose Namajunas will defend her UFC women’s strawweight championship against Zhang Weili, whom she defeated to win that belt for the second time in April. Was the immediate rematch the right fight to make at strawweight?

Our panel of Brett Okamoto, Marc Raimondi, Jeff Wagenheim and Carlos Contreras Legaspi breaks down the biggest questions of the moment to separate what’s real from what’s not in the world of MMA.

Namajunas-Zhang 2 was the right fight to make

Raimondi: Rose Namajunas vs. Zhang Weili 2 isn’t necessarily the wrong fight to make. There’s nothing particularly offensive about this booking, and it’s understandable why the UFC went in this direction for a big card at Madison Square Garden, which is set for Nov. 6 at UFC 268. Zhang is on the verge of becoming a big star for the UFC in China, and she is a major part of the promotion’s plans to expand in that area of the world.

The UFC has invested a significant resources in the region, including a Performance Institute in China that is three times the size of the original version in Las Vegas. In an interview this summer, UFC COO Lawrence Epstein told me that there is a belief internally that the UFC can be as big in China one day as it is in the United States.

On top of all that, Namajunas beat Zhang with a flash head kick knockout back at UFC 261 in April to win the UFC women’s strawweight title for the second time. It wouldn’t be fair to Namajunas to call that a fluke; when she won back the belt she lost to Jessica Andrade, she did so in extremely impressive fashion.

Chael Sonnen marvels at Rose Namajunas’ amazing knockout of Zhang Weili and apologizes for previously not recognizing her as one of the greatest of all time.

But there was a feeling by many that there was unfinished business between the two. And one last point here: location matters. New York City has the highest population of ethnic Chinese people in the world outside of Asia. So, the UFC rightly views Zhang as a ticket-sales draw in the Big Apple.

With all of that being said, the UFC didn’t really need to hotshot Zhang back into an immediate title shot rematch, which is the primary reason why I’m going to say “not real” about this statement. Carla Esparza has done everything possible to earn a shot at the strawweight belt, winning five in a row. There’s a built-in, fantastic story there with Namajunas and Esparza, too. In December 2014, Esparza finished Namajunas by submission to become the first ever UFC women’s strawweight champion.

Since then, Namajunas has stood out, winning the title twice and earning huge wins. And Esparza, who struggled initially after losing the title to Joanna Jedrzejczyk, has worked her way all the way back to the top of the contender heap seven years later.

Namajunas vs. Esparza 2 would have been the best possible scenario. Again, that doesn’t mean Zhang getting slotted in there is necessarily wrong. But Zhang could have easily challenged the winner of Namajunas vs. Esparza, and the possibility of Zhang winning could mean that Namajunas and Esparza may not ever get to complete a story that dates back to the very origin of the division.

Darren Till can still be a title contender

Okamoto: Very real. This one’s easy. If anyone has given up on Till as a legitimate title challenger, it’s a mistake. Till is only 28. I’d honestly have a hard time giving up on a lot of different prospects by the time they’re 28, let alone Till, who has always had a super high ceiling.

Till was kind of rushed into his first UFC title shot against Tyron Woodley in 2018, and frankly, he lost a fight he probably wasn’t ready to win at that point. He lost to Jorge Masvidal in 2019 — another opponent who had a significant experience advantage on him. And most recently, he lost to Robert Whittaker who, in my opinion, could legitimately be in the top 10 as best pound-for-pound fighters on the planet.

Maybe there will come a time to give up on the possibility of Till as a legitimate UFC champion. If we’re sitting here four years from now and Till has come up short in some big main events, or some significant fights that would have put him in title contention, then maybe we can move on from his title aspirations.

But absolutely not now. Till is a legitimate threat to win a UFC championship in my eyes, and he could very well prove that against Derek Brunson on Saturday.

Giga Chikadze vs. Max Holloway is a matchup that makes sense

Wagenheim: For Chikadze, this is as real as it gets. After his eye-opening knockout of Edson Barboza on Saturday night, it makes perfect sense for Chikadze to want to supercharge his ascent toward a title shot by calling out the former champ.

This actually wasn’t the first time Chikadze called for a fight against Holloway. He also did so in May right after he folded Cub Swanson with a “Giga Kick.” But back then it felt premature, as Swanson was his first “name” opponent. Now things are different. Chikadze is suddenly a name himself.

But is he a big enough name that it would make sense for Holloway to take a fight against him? I don’t think so. Holloway is No. 2 in ESPN’s men’s featherweight rankings, while neither Chikadze nor Barboza is even in the top 10. The same credentials gap exists in other media rankings as well. So why would Holloway risk his lofty standing in a matchup that, for him, has no upside?

If Chikadze wants this fight to happen, he should continue harping on his claim to be the best striker in MMA. Say it and say it and say it, and maybe Holloway will get tired of hearing it and decide to shut Giga up with his fists. But I believe Holloway has the veteran’s savvy to not be ruled by his ego. So in the end I’ll say this proposed matchup is “not real.”

Marlon Moraes is the step-up fight that Merab Dvalishvili needed

Legaspi: Merab Dvalishvili has proved to have enormous talent, and he’s in a rush to face the big names and become a champion. Marlon Moraes represents the perfect opportunity for Dvalishvili, so I’m going to say that’s “real.”

After a rough start in the UFC, in which he lost his first two fights, Dvalishvili is now on a six-fight win streak and he’s on the verge of breaking into the bantamweight top 10, but he has yet to finish an opponent in the Octagon.

Moraes has fought for the UFC bantamweight championship, and is the former World Series of Fighting bantamweight champion. He’s on a two-fight losing streak with knockout losses in three of his past four fights, and he’s look looking for redemption. A win over Dvalishvili could be just what Moraes needs to start righting the ship.

Moraes likes to exchange and brings the kind of high-pace striking that can deliver an explosive fight. And with Moraes fighting for his long-term prospects in the UFC, it’s very unlikely he’ll play it safe or look to wrestle against Dvalishvili, a sambo standout.

Dvalishvili needs to be aggressive in this opportunity at UFC 266, because a knockout over a high-profile opponent like Moraes could mean a jump straight into the top five of a very competitive division and put him on the road to a future title shot.