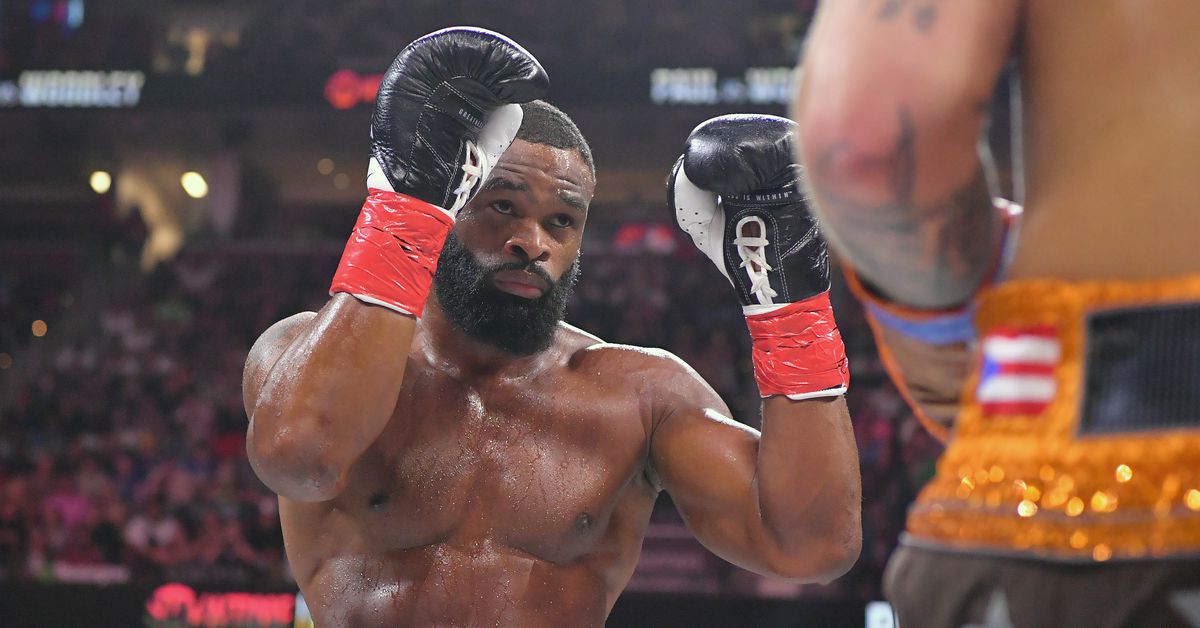 Former UFC welterweight champion Tyron Woodley concedes he may have given away a few rounds against Jake Paul, but he is adamant he should have been declared the winner of their eight-round boxing match on Sunday in Cleveland.

Woodley again called for a rematch with Paul after losing a split decision and indicated he’d meet the YouTube star turned boxer’s demand of getting an “I love Jake Paul” tattoo.

“I feel like I won that fight,” Woodley told reporters at the post-fight press conference for the Showtime pay-per-view event. “I feel like I landed the power shots. I feel like even when he landed a shot, I f*cking brushed it off and came back and cracked him. I was in his face, I was in his sh*t, pause, and his back was against the ropes the entire time. I was walking him down.

“I could have been more assertive. I was patient. I was seeing my shots, but I didn’t want to be antsy with that overhand right. He may have landed it a few times, but I know he missed a lot.”

According to Compubox stats released after the fight (via BoxingScene), Paul also landed a higher percentage of shots than Woodley, coming out ahead in total punches, total jabs and power punches. In a fight with a fairly low number of total strikes, Paul was the more active fighter in all but the fourth round, which Woodley decisively won.

Woodley, though, said he was never in danger – it was Paul that almost got finished with a right hand.

“I felt like I had him,” he said. “One time, I almost knocked him through the rope. I really wasn’t f*cking with that rope. We came in this morning to do a test run; if you’re not 7-7, sh*t, you can be held up by it. So I hit him, and he bent into the ropes, and I was going to try and knock him through that motherf*cker.

“Look at my face,” he added later. “Do I look like I felt somebody’s power? I got hit with a shot, but this is boxing. I don’t have one cut on my face. I look just as pretty as I did going in as coming out. I never touched the canvas. He was the only one that was close to touching the canvas.”

Woodley explained his hesitancy to be more aggressive came from his previous fight, a submission loss to Vicente Luque in his final UFC fight.

“My last fight, I had a guy on the ropes and I f*cking went apesh*t on him and I was going crazy and I got snuck with a punch, so I was trying to be a little more smart,” he said.

As it turned out, that wasn’t enough to win the fight. But Woodley was confident he would get another shot at Paul.

“It’s done,” he said. “We’re doing the rematch. I’ve got to get that win. It was too close. This was a movie. Ain’t nobody going to push it like me and him did. We sold the sh*t out of it.”

Woodley hopes the next time around, he won’t miss a chance to capitalize on the moment where Paul is flagging. Late in the fight, the YouTuber appeared to be fading.

“He was fatigued in the fight, and he found a way to push through and he came through strong, so I can’t never knock him for that,” Woodley said. “But we’ve got to run it back.”