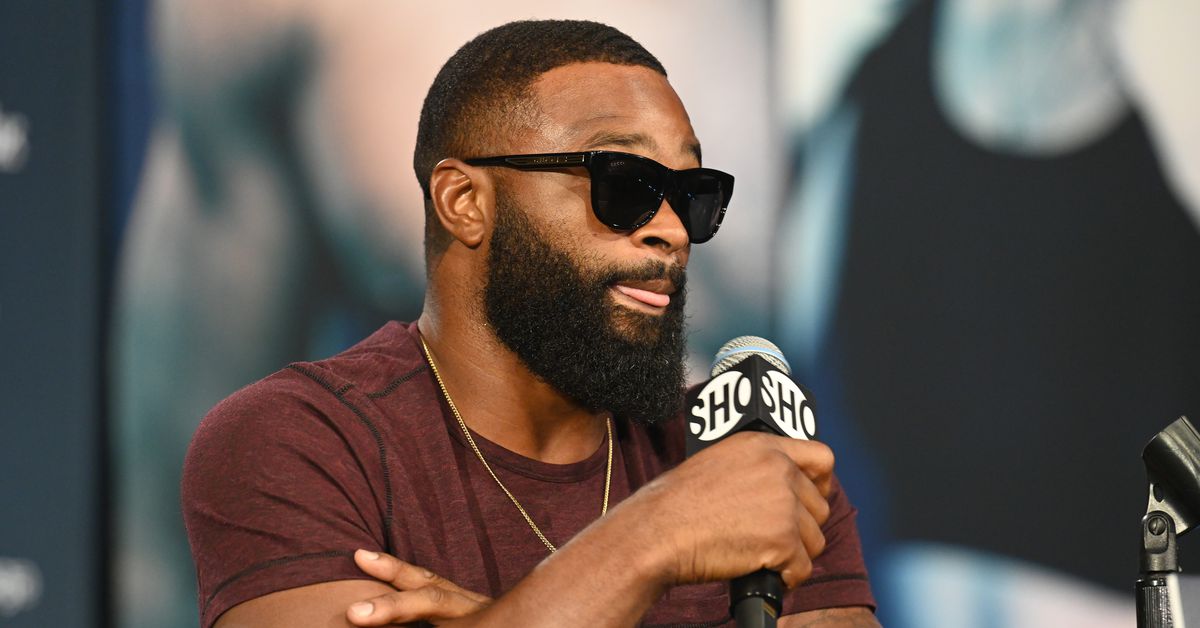 Jake Paul may be 3-0 with a trio of knockouts over three opponents with zero combined boxing experience between them, but it’s former UFC champion Tyron Woodley who actually has more questions to answer heading into their fight on Sunday night.

That’s according to UFC Hall of Famer Michael Bisping, who has admittedly been impressed by what he’s seen out of Paul early into his boxing career — even if he hasn’t faced much real opposition yet.

Bisping was in the minority picking Paul to beat retired UFC fighter Ben Askren in his last outing despite most involved with MMA siding with the ex-Bellator and ONE champion in his boxing debut. Paul silenced the doubters by demolishing Askren with a single right hand just before the two-minute mark in the opening round.

“I think if most people were honest, they knew that was going to happen as well,” Bisping said on The Fighter vs. The Writer podcast. “Just think a lot of people felt the need to defend the mixed martial arts community and have their back.

“But if they took away the bias that they already had in their mind because he was an MMA fighter, if you look at it on paper, Ben Askren can’t box. He never had a background in boxing and the little bit of boxing that I’ve seen in the UFC is garbage. It was bad. That fight with Demian Maia, you’ve seen that little highlight where he’s throwing the spinning back fist. So Jake Paul’s been smart but he’s fighting better competition than other boxers would.”

While he’s still not facing an experienced boxer, Paul has gotten credit for a step up in competition by choosing Woodley as his next opponent.

The former UFC welterweight champion comes into the fight with an incredibly deep resume from his MMA career, but perhaps most importantly, a track record for having serious knockout power in his hands, which is something Paul has really never faced before.

That said, Bisping can’t help but question what he’s going to see out of Woodley after he exited the UFC off four straight losses, including three completely lopsided outings in a row where he lost 14 consecutive rounds.

“I know Tyron is coming at this from a different aspect than Ben Askren,” Bisping explained. “I know he’s looking at this to springboard a career into boxing. I don’t know if that’s going to work cause this is a tough fight. It’s a tough fight for both. Tyron’s training, I know that from social media and he came on my podcast as well. He’s taking this fight seriously.

“Of course when you look at Tyron, he’s lost his last four. He had a massive fall from grace. Tyron was one of the best champions the UFC had and then he lost four in a row. Didn’t go well. So more importantly for Tyron Woodley, this is about getting some kind of pride back, albeit against a YouTuber or a boxing match or whatever it is. This is about Tyron Woodley getting back to winning ways, so he’s pushing himself, training as hard as he can.”

Woodley has been saying all the right things leading into his boxing debut while showing focus and a lot of intensity during all of his interactions with Paul, but that still doesn’t guarantee victory.

Considering his last few performances, Bisping can’t help but question what’s running through Woodley’s head as he gets ready to compete in a boxing match for the first time after suffering through an arduous end to his UFC career.

“Ultimately as a fighter, a lot of it is confidence,” Bisping said. “They say all the time: Fighting, yeah of course it’s a very physical sport, but it’s mental, 90 percent of it is this. You’ve got to have confidence and believe in yourself, and of course if you train hard and you push yourself, that gives you confidence. But also winning fights gives you confidence. Jake Paul, alright, he’s young in his career, he’s undefeated. I remember when I was undefeated, I honestly believed there wasn’t a human being on this Earth that could beat me. Because up until that point, it hadn’t happened. Prior to being a mixed martial artist, I was always getting into fights as well and I was undefeated in the f*cking streets as well. No one’s going to beat me, and even if they could beat me, I can always hold my own and whatever.

“For Tyron, it’s the opposite. He’s lost his last four. Yeah, he came out against Vicente Luque very strong, but that’s because he felt the pressure ‘cause he knows what people are saying. He’ll hear the noise. You’ll hear the critics, you’ll hear the journalists and the fans and people on Twitter and all the comments on Instagram. People talk sh*t, and we, as fighters — we see that stuff. And Tyron wanting to dispel those myths, he wanted to come out there and show the world [against Luque] and that eventually bit him in the ass.”

With Paul exuding confidence after knocking out his first three opponents, Bisping understands why Paul feels untouchable right now, and that’s a much different approach to a fight than Woodley attempting to resurrect his career after those four straight losses.

“Jake Paul, 24 years old, literally young, dumb and full of c*m,” Bisping said. “Everyone’s kissing his ass, he’s just knocked out Ben Askren, he thinks he’s hot sh*t. That’s just the reality. That’s how you are. At that phase of your life, everybody’s swinging off his nuts, telling him ‘you’re the man.’ He’s already world famous. He’s got 40 million YouTube followers or whatever. He’s got wealth. With all that stuff comes ego. Now he’s beating people as well and he just knocked out Ben Askren.

“So you bet your ass Jake Paul’s coming into this one thinking he’s going to walk through Tyron Woodley. Of course he’s going to have reserved confidence, he’s going to have respect for Tyron and the ability that he has. But on paper, all the physicalities — whether they’re mental or physical — they all fall into favor for Jake Paul. That’s why Tyron is in a tough situation here.”

Even when it just comes down to boxing, Bisping isn’t sure what to expect out of Woodley because he’s spent most of his life as a wrestler or a mixed martial artist. That also includes all the talk about Woodley’s tremendous knockout power, which was displayed in MMA fights like his win over Robbie Lawler to become UFC champion.

Bisping can relate to the vast differences between an MMA fighter who can hit like a truck and a truly skilled boxer in the ring.

“He’s not a boxer,” Bisping said of Woodley. “Tyron was very good cause he’s a good grappler; he had powerful kicks; a hell of an athlete; very, very explosive; a good wrestler. The fear of the wrestling also sets up the power in the hands. It’s a complete threat. You don’t know where he’s going to come at you. This is just boxing. Does he know the full sweet science? Does he use his jabs and all the rest of it? Is he going to work to the body? Is he going to move the head? Have head movement? In and out? Does he do all that stuff? I haven’t seen that. I’ve seen him rely on big power shots. That’s not boxing.

“I remember when I fought Dan Henderson the first time, my boxing coach at the time watched tape of him and said, ‘This guy’s f*cking horrendous. He’s awful. He’s f*cking sh*te. He’s sh*te. If you lose to this guy, we’re f*cking done,’ because he’s right. When you look at Dan Henderson, he’s terrible, but he’s effective. You can’t say he’s not f*cking effective because he knocked me out cold. The point I’m making, you don’t need to be a technical boxer in a mixed martial arts fight when you can walk someone down with four-ounce gloves on and swing and there’s a threat of a takedown and all the rest of it.”

When it comes to his prediction, Bisping admits he’s absolutely going to be pulling for Woodley to pull off the upset, but he can’t deny that the odds are against him and Paul should be favored to win.

“When you look at this fight on paper, a lot of the advantages go over to Jake Paul,” Bisping said. “He’s the taller guy, he’s the younger guy, he’s got longer reach, he hasn’t got as many miles on the clock. Tyron was defeated in his last four [fights]. When you look at Tyron as well, the thing that disappeared for me with Tyron was the fighting spirit. That’s what kind of went. Towards the end, all Tyron would do is float around the perimeter of the octagon and look for the Hail Mary, that one big shot. Of course we saw him do that against Robbie Lawler and he knocked out some other people as well. He was known for having big power, but that kind of became his kryptonite because that’s all he would do. That’s all he would do was look for that. I do feel maybe the internal fire for success, maybe that was dampened.

“I like Tyron, I like him a lot and I wish him the best, and I hope for the love of god he goes out there and wins this weekend, because, I mean, otherwise, again, it’s going to make us MMA fighters look bad. There’s only one way we’re going to find out and that’s [Sunday] night. I hate to say it but I also think Jake Paul’s going to get the job done.”

MMA coach Duke Roufus calls for culture shift in stopping fights: ‘It’s your job to protect the fighter’
Matt Brown: ‘I’m a savage motherf******’, but ‘I would have stopped’ Lauren Murphy vs. Jessica Andrade
Conor McGregor gets offer to coach The Ultimate Fighter: ‘I like it’
Midnight Mania! Former UFC Featherweight Wrangles Would-Be Thief
Report: Sterling-Cejudo Headed To UFC 287 In April