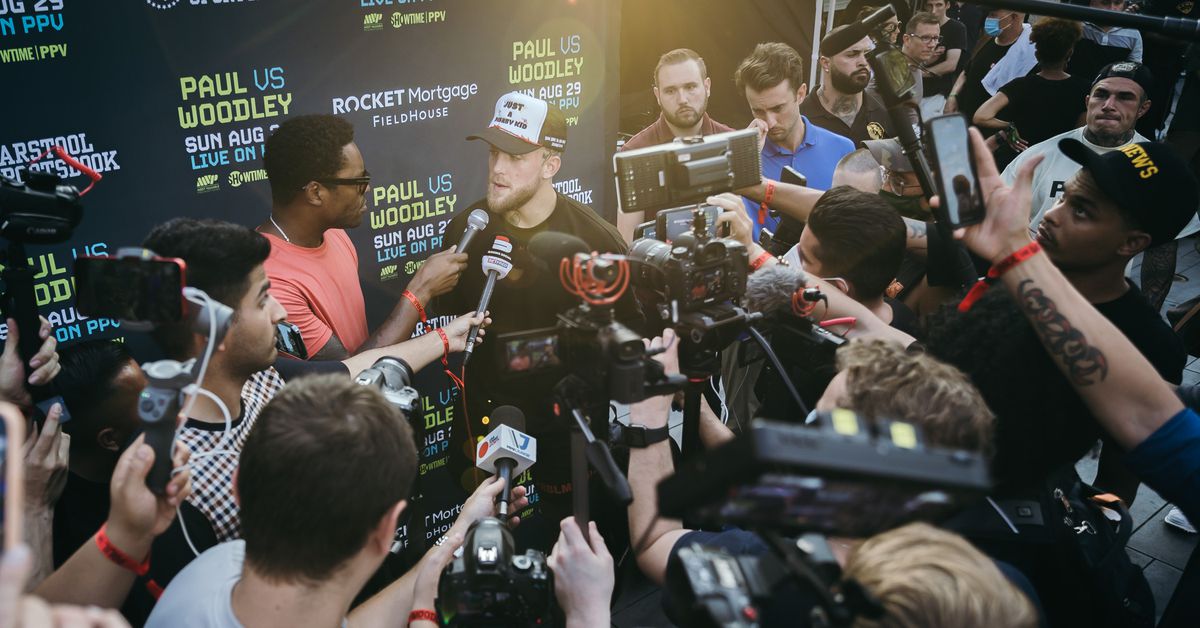 The line between sport and entertainment has never been more translucent. It certainly exists, but trying to pinpoint whether the merits of a celebrity boxing match justify true boxing analysis or a mere point-and-laugh can be confusing.

In the case of Jake Paul vs. Tyron Woodley, fortunately, it is a bit more clear. Woodley, after all, is a former mixed martial arts (MMA) world champion with multiple title defenses. It remains to be seen how months of strict boxing training will improve his hands, but we still have a grasp on his general approach to combat.

Paul, meanwhile, has done about as well as anyone could ask given his previously low level of competition. He’s shown some craft in his trio of stoppage wins, and Paul has generally taken his boxing training very seriously. The Canelo callouts will permanently remain delusional, but still, the YouTuber is going for it.

For better or worse, this is now a real boxing match. Let’s break it down:

Watch the most talked about combat sporting event of the summer, a battle between renowned YouTube content creator and undefeated professional boxer, Jake “The Problem Child” Paul, locking horns with former UFC champion, Tyron “The Chosen One” Woodley, on Sun., Aug. 29, 2021, streaming online via pay-per-view (PPV). “Paul vs. Woodley,” which will take place inside Rocket Mortgage FieldHouse in Cleveland, Ohio, start time is slated for 8 p.m. ET, with a PPV price tag of $59.99.

1. Jab Smartly: By design, Paul has fought opponents that cannot match his height, reach or size. Criticize if you’d like, but building one’s self up is a smart move whether we’re talking amateur fighter, boxing or celebrity. That trend continues with Woodley, and Paul has to be sure to capitalize on those physical gifts with the long jab. However, he has to be distinctly aware that Woodley will be looking to time his overhand atop Paul’s jab. Simply bringing his fist back to his chin afterward isn’t enough: Paul must disguise the jab with feints and stay behind his lead shoulder when poking “T-Wood.”

2. Find The Right Hand Counter: Woodley is far and away the biggest puncher Paul has faced, and there’s a chance the former champ intends to immediately try to bulldoze Paul. To avoid such a fate, Paul has to earn his opponent’s respect and give him a reason to hesitate. The jab will help, but thus far, Paul has shown a solid ability to fire the right hand when foes advance. So long as he takes his head off the center line, trading right hands with Woodley isn’t the worst move.

3. Put Woodley In The Corner: This strategy combines Paul’s size advantage with a historic Woodley flaw. Inside the Octagon, Woodley often back himself into the fence, using that position to guarantee there was open space behind his opponent for takedowns. The cage, however, has much less pronounced corners than a boxing ring. If and when Paul finds his opponent backing up, corralling him into the corner may provide a relatively easy way to pick up a big strategic advantage.

1. Do Not Wait: Woodley has never been a high-volume striker in his MMA career. In the last few years, however, he really committed to a strategy of efficiency over output. It worked against Demian Maia, but more skillful strikers like Kamaru Usman and Gilbert Burns were able to bully him as a result and get far ahead on the score cards. In a boxing match, volume is often king, particularly as the smaller man. Woodley has to focus on winning rounds rather than simply hunting for the right hand knockout.

2. Work Inside: As the shorter man, Woodley has to find ways to get inside on Paul. Again, simply counting on the cross counter to land at some point is not enough. Instead, Woodley should be moving his head and advancing forward, looking to get beneath Paul’s punches. From that position, Woodley can target the mid-section, which will slow his opponent’s feet and leave him more predictable. Plus, that body work will help set up the overhand or a left hook to the chin.

3. Jab With Paul: One of the big mistakes shorter athletes commonly make is neglecting their own long-range weapons. Just because Paul has a few inches of reach does not mean that Woodley cannot parry his jab and look to snap his foe’s head back. In fact, it would greatly benefit Woodley to do just that, as jabbing with Paul can help prevent him from building any sort of safe lead. Then, Paul will be forced to extend his combinations and take more chances — chances that improve the odds of Woodley timing his own perfect counter punch.

MMAmania.com will deliver LIVE coverage of tonight’s main card right here. The $59.99 Showtime/FITE PPV kicks off at 8 p.m. ET, with Paul and Woodley likely to make the walk closer to 11:30 p.m. ET. For the complete Jake Paul vs. Tyron Woodley fight card click here. For more news and notes on their upcoming grudge match click here.

This Saturday (Aug. 28, 2021), an MMA fighter will battle a YouTube star in an actual boxing match. Which athlete emerges from this circus victorious?