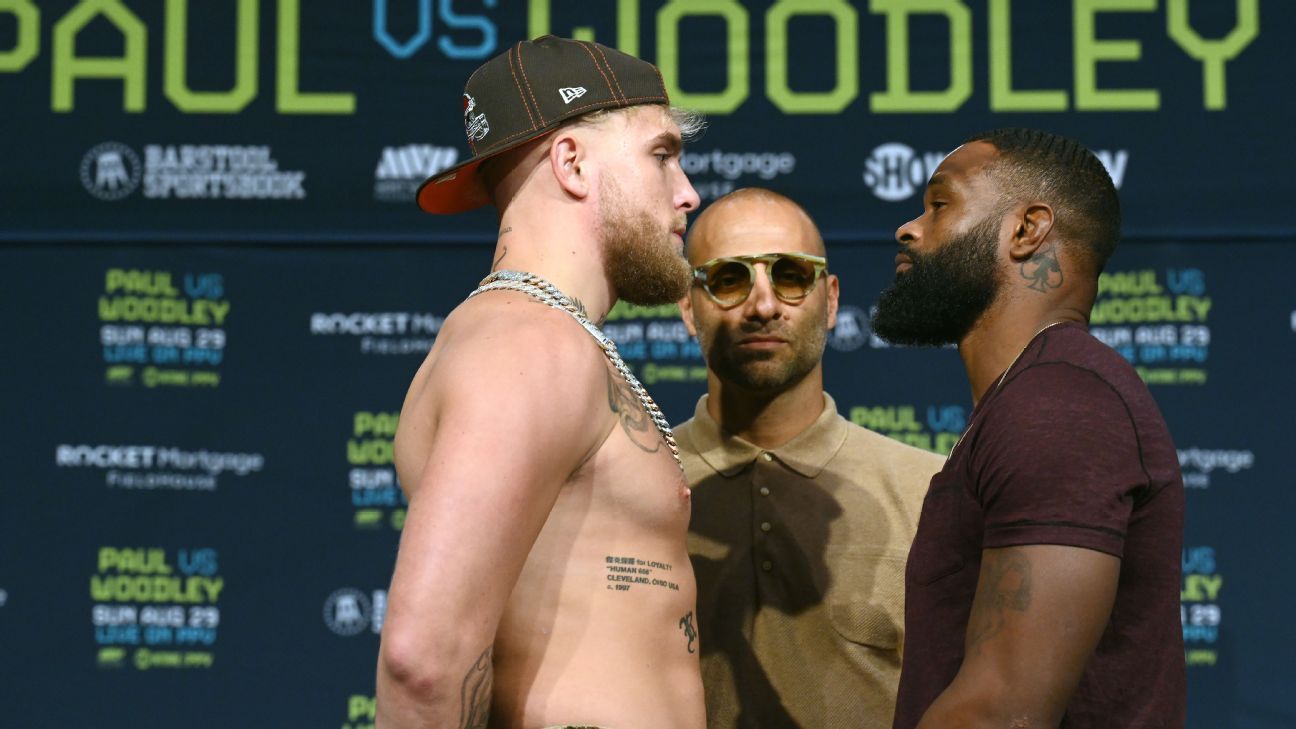 CLEVELAND — Tensions were already high this week between Jake Paul and Tyron Woodley, and on Thursday things boiled over.

After the Paul vs. Woodley news conference at the Hilton, Woodley heard a member of Paul’s team talking trash to Woodley’s mother, Deborah, who was sitting in the crowd of media and camp members. Woodley’s sister went back verbally at the Paul training partner. Woodley attempted to get through the crowd to his mother and the Paul team member, but he was held back.

The sides exchanged heated, vulgar language and there was a lot of pushing and shoving until Woodley, his family and team were removed from the crowded room. It was an ugly scene that could have gotten much worse, but cooler heads prevailed. No one was injured.

“One thing I don’t do is disrespect,” Woodley told ESPN afterward. “And when disrespect comes to my mother, it’s a whole issue. F— this money, f— this bag, f— the pay-per-view, f— the fight. When it comes to that, it will not be tolerated.”

Paul and Woodley are scheduled to fight Sunday in a boxing match. Paul, the YouTuber-turned-prizefighter, is known for his antics, trash talk and creating content. Woodley is a former UFC welterweight champion and figures to be the toughest test of Paul’s very young boxing career.

Showtime Sports president Stephen Espinoza told ESPN that he would review the footage of the incident to determine whether or not the two camps need to be further separated or if more security is necessary.

“It’s never a good thing,” Espinoza said. “We’re still trying to get to the bottom of it. On one level, I understand it. Emotions are running high, and not just among the participants. This has been a pretty heated promotion and sometimes family gets involved. I think there were things on both sides that crossed the line. It erupted pretty suddenly and quickly dispersed before anything happened. The reality is it’s never something we want to see and we’ll definitely take steps to make sure that it doesn’t happen on this promotion and hopefully on future promotions.”

Paul and Woodley completed the traditional square-off photo op, and Woodley said he heard someone talking to his mother a few yards away in the hotel ballroom crowd. Woodley said it didn’t even matter what was said.

Woodley was furious and demanded an apology from the Paul team member who was talking trash to his mother. Paul tried to make light of it and talk more trash.

Paul told ESPN he was disappointed in what happened and thought both sides were in the wrong. He said normally he’d be happy about an incident that would help promote the fight but that he had just talked about Women’s Equality Day and how the co-main event Sunday would feature a women’s fight: Amanda Serrano vs. Yamileth Mercado.

“This is the fight business. This is part of it. Sometimes I think we forget that. While I am upset, it’s like yeah, this isn’t soccer where everyone is kind and respectful. We’re trying to take each other’s heads off, literally. This is a dangerous sport. So it is a reminder going into Sunday that you’ve got to protect yourself at all times.”

Paul said he would not apologize to Woodley on behalf of his team, though.

“I don’t think it’s needed,” Paul said. “There’s only a couple more days left of me dealing with him or seeing him. I’m sure everyone is gonna go home, eat their dinners and get over it. We’re all men and women at the end of the day. We’re not going to be resentful.”

Deborah Woodley has been a fixture at her son’s UFC fights and is highly respected in the MMA community. She is known for hugging and giving encouraging words to her son’s opponents, even after his defeats.

“That’s not an antic,” Tyron Woodley said of the situation. “That’s disrespect. That’s an outlier. … He could have took my hat, took my f—-ing glasses. Made a joke. He could have even shoved me. He would have got slapped, but still. He crossed the line.”