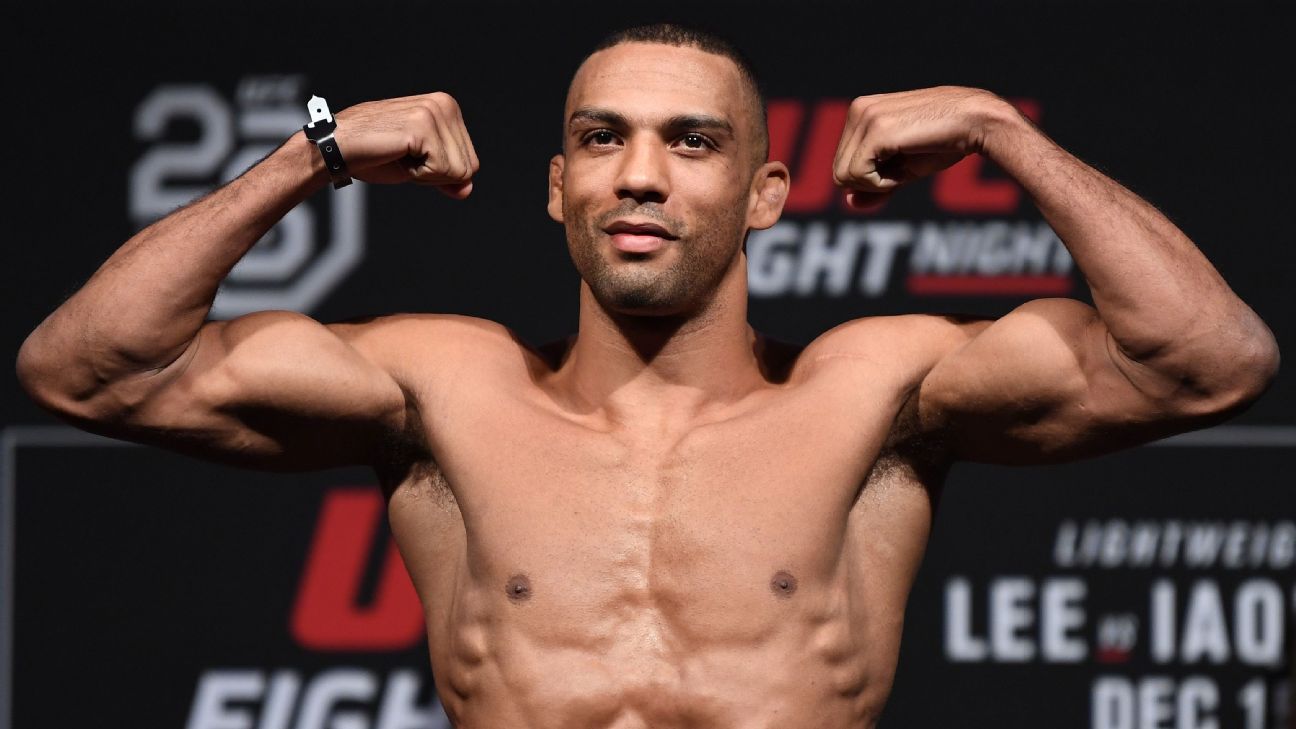 When the UFC first announced this 145-pound pairing, fight nerds around the world rejoiced on social media. It features world-class technique, skill, athleticism and power. There can be only one dark horse in each division, and the winner of this fight could assume that role at featherweight. The winner will be a scary matchup for anyone in the top five.

For Barboza (22-9), a victory on Saturday would likely move him closer to a title fight than he’s ever been in his nearly 12-year UFC career. The 35-year-old Brazilian, who has never fought for a championship, is 2-1 since moving to featherweight (with a controversial split-decision loss to Dan Ige) in May 2020.

Edson Barboza looks to continue his return up the UFC’s featherweight ranks with a third straight win, while Giga Chikadze — 6-0 in the UFC — hopes to elevate his own future title chances.

This week, Barboza has said he’s drawn inspiration from lightweight champ Charles Oliveira and light heavyweight No. 1 contender Glover Teixeira, who have either earned a UFC title or are close to doing so — after very long UFC careers.

Chikadze (13-2), meanwhile, is only now starting to taste top-10 relevancy. The Georgian featherweight enjoyed a breakout year in 2020, with a 4-0 record. So far this year, he has followed that up with a first-round knockout of Cub Swanson back in May, which earned him his first UFC main event.

Everything about this matchup is elite, and it will test both featherweights in what they are very best at. Barboza is known as one of the best strikers in MMA. Chikadze has basically said his striking is on a level that doesn’t even exist in MMA, having done a lot of training and competition in traditional karate, kickboxing and boxing.

The winner of this fight won’t challenge for the title overnight, but will certainly enter the rarified air of 145 pounds. It’s a legitimate Fight of the Year candidate on paper, and carries a lot of weight in what will happen next in the division.

The main card of Saturday’s UFC Fight Night, which also features two Ultimate Fighter finals, is on ESPN and ESPN+ at 10 p.m. ET, with the prelims on ESPN+ at 7 p.m.

3: Featherweights who have started their UFC careers 7-0. It’s just Jose Aldo, Conor McGregor and Arnold Allen, although Chikadze would join them with a win on Saturday. Across all weight classes, 21 of the 24 fighters to start 7-0 inside the Octagon have gone on to fight for a championship.

16: UFC victories for Barboza, tying him with Gleison Tibau and Francisco Trinaldo for the fifth most by a Brazilian fighter. With a win on Saturday, he would tie former middleweight champ Anderson Silva for fourth place.

6: Most UFC victories by a fighter from the nation of Georgia. Tied for that distinction are Chikadze and bantamweight Merab Dvalishvili, both of whom are on six-fight winning streaks.

0.92: Knockdowns per 15 minutes in the Octagon by Chikadze, the sixth-highest average of any featherweight in UFC history. The only active fighters ahead of him on the list are Josh Emmett (2.51) and McGregor (2.31).

14: Knockdowns in the UFC for Barboza, tying him with ex-champions Chuck Liddell, Lyoto Machida, Mauricio “Shogun” Rua and Junior dos Santos for the fourth most in the promotion’s history. Among active fighters, only Donald “Cowboy” Cerrone (20) and Jeremy Stephens (18) are ahead of Barboza. 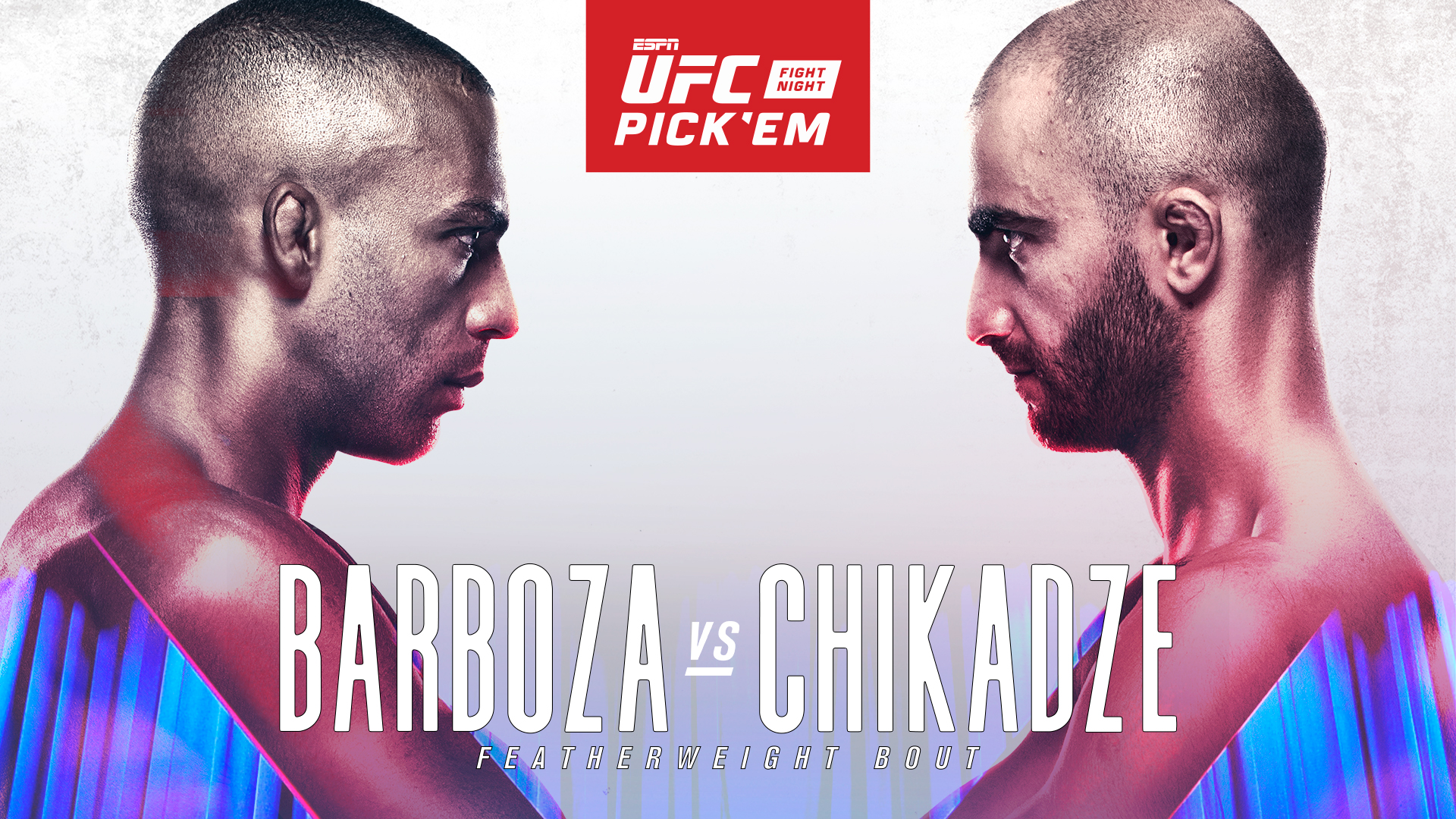 “We haven’t seen Giga fight the level of competition we’ve seen Edson fight,” said Sayif Saud, head coach at Fortis MMA in Dallas. “I still don’t think that precludes him from being prepared. I think Giga has shown it. That kick he landed on Cub [Swanson in a first-round TKO in May] — Cub is tough, man — he snuck it right in there. That guy is really, really crafty. Edson has shown he can kind of get grinded on. If someone pushes the pace on him, he can get a little bit tired. That being said, these guys have a similar style. They like to kick. If it ends up being at range, it’s really a pick ’em fight.”

Check out how Saud and other experts break down the main event and predict a winner.

For more on the Season 29 finals, go here.

All of the fights, prelims included, are on ESPN+. Get it here.

1. Kevin Lee returns to the Octagon for the first time since losing to current lightweight champion Charles Oliveira back in March 2020. Lee has lost three of his last four fights and is 2-3 since fighting Tony Ferguson for the interim title in 2017. He’s now fighting at welterweight, and will take on Daniel Rodriguez, who has won 11 of his last 12.

2. Alessio Di Chirico, stepping in on short notice to replace Antonio Braga, faces middleweight Abdul Razak Alhassan. Di Chirico is coming off a head-kick knockout win vs. Joaquin Buckley in January, but he lost his three fights previous to that. Alhassan will be looking to avoid a fourth straight defeat.

3. Dustin Jacoby had won four straight before fighting to a draw with Ion Cutelaba in May. Jacoby faces Darren Stewart, who is winless in his last three fights. Both men started their UFC runs at middleweight and have transitioned to light heavyweight for their three most recent fights.

4. Makhmud Muradov has not lost a professional MMA fight since December 2016, rattling off 14 straight wins, including three in the UFC. He’ll take on veteran middleweight Gerald Meerschaert, who will be looking to win consecutive fights for the first time since 2017-18.