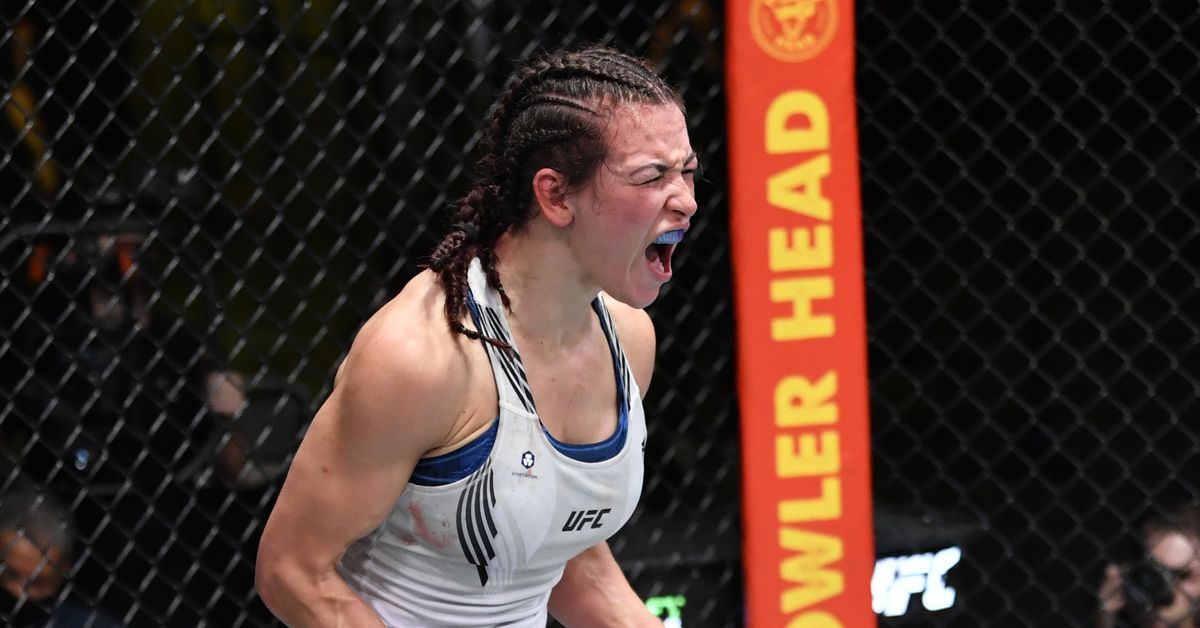 Miesha Tate wants to make it clear that she wasn’t looking for sympathy with her recent comments about fighter pay. She wasn’t attacking anyone and she certainly wasn’t trying to throw a pity party for herself.

Rather, her comments last week on her SiriusXM podcast revealing that she spent “about 98 percent” of her $200,000 fight purse from her successful UFC comeback over Marion Reneau were meant simply to give fans a glimpse into the realities of the reported fighter salaries they read on the internet, and also to illustrate just how dedicated she’s been toward achieving her ultimate goal of recapturing the UFC women’s bantamweight title.

“What I was trying to say is that, it’s not all just money that gets to go in the bank,” Tate explained Wednesday on The MMA Hour.

“It’ll go to taxes, it’ll go to coaches, it’ll go to all these different things. I’m OK with that, because that’s me investing in myself. I’m not going to complain that I’m in a 37th percent tax bracket. That means I’m making a lot of money. Having to pay taxes is a good thing. And also paying my coaches — I have more coaches, I have more people who understand what’s going on in the game. And hey, you know what? It’s alright. I’m down to spend the money on myself. I spent it on all-organic, grass-fed food. If it doesn’t run, fly, swim, or come straight out of the ground, I didn’t eat it. My diet was very expensive,” she continued.

“My food prep, all these things. And to be fair, a lot of them were first-time purchases that will benefit me, because I haven’t fought in five years. You invest in new running shoes, you invest in a new bike, you invest in a new heart rate monitor or whatever, these kinds of things. My camp was very expensive, but the results were great and I’m going to continue on that trend. I would spent every last penny to touch that belt again. I’ll spend it all.”

Tate, 35, defeated Reneau via third-round TKO at UFC Vegas 31. The fight was Tate’s first since 2016 and ended a near five-year stint in retirement.

In clarifying her comments on Wednesday, Tate explained that “60 to 70 percent” of most MMA fighters’ purses are wiped away instantly by taxes and training expenses. For her, much of the remaining amount was spent reinvesting in her comeback after giving birth to two children in the last three years and spending so long away from active competition.

Tate also earned a $50,000 post-fight bonus along with sponsor pay from Venum, and said she had no regrets about any of her decisions, because ultimately the money did its job.

“I’m not complaining about what the UFC pays me,” Tate said. “The UFC paid me $200,000. I wouldn’t get that anywhere else I don’t think. So look, I got $200,000 to spend on my camp. I reinvested it in myself, almost all of it. It wasn’t a bad choice. I’m not broke. I own my house free and clear. I own my cars free and clear. I have a great life. So I know I’ll make hand over fist when I’m a champion again, that’s the ultimate goal. Some fighters don’t spend that much money. There’s some fighters out there who cut corners.

“I didn’t make the statement to make people feel sorry [for me],” she added. “I just want people to know how serious I am, like how serious I am in investing in myself and that I’m going to spend whatever it takes to be a world champion again. That’s really where it is. It’s public information at most places, what we got paid. My pay was already released so I didn’t feel like it was a secret. Plus I got the $50,000 bonus — I was really happy about that, and I think we got another $11,000 from [Venum]. So, at the end of the day, I walked away with some and I’ll walk away with a lot more when I’m holding the belt again.”

In the end, the win over Reneau was an important one for Tate to help reestablish her as a viable contender in the UFC’s modern-day 135-pound division.

While the name atop the weight class hasn’t changed — two-division UFC champion Amanda Nunes still holds the belt she took from Tate nearly five years ago at UFC 200 — virtually every other factor in Tate’s life has flipped upside-down since her last push toward gold. She’s a mother, a fiancée to new partner Johnny Nuñez, and she said Wednesday that she finally feels as if fighting is just one aspect to her identity, rather than the whole thing.

“I was always so afraid of, if I lost, that’s what I was. I was a loser. That was my identity. Now I have a complete identity outside of just being a fighter. So I’ve come back for the first time in my life fighting only because it’s my desire, it’s my passion, it’s what I truly want to do. I’m doing this for the first time for myself, for nobody else, with no extra outside influence in a negative way, in a positive way. It’s just about me and where my mindset is.

“And I just think it makes me that much more dangerous, because truthfully I can go out there and throw all caution to the wind,” Tate continued. “God forbid, if I lose, I still get to go home and kiss my kids and have a great life. My life is awesome. So I can do is put 100 percent in there, and that’s what I’m going to do every single time. I have no fear of losing. No fear. So I’m just going to go out there and I’m going to win.”