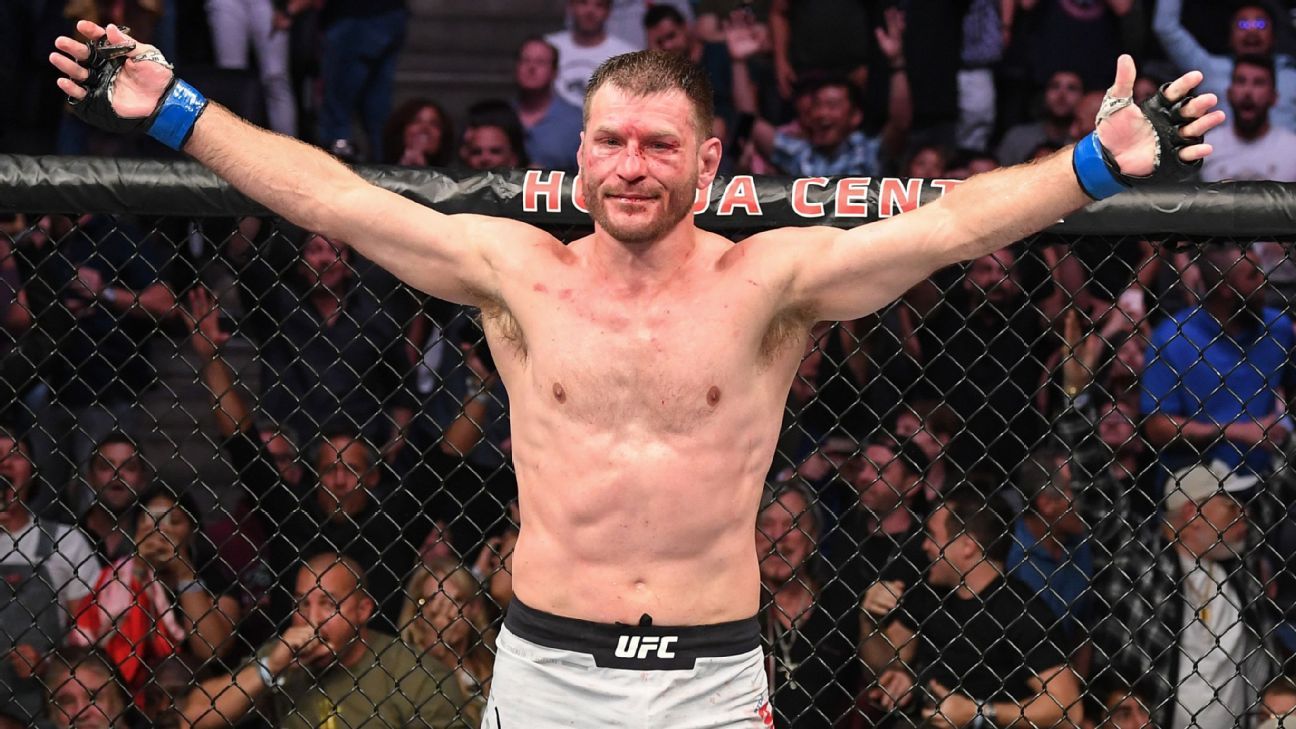 CLEVELAND — Stipe Miocic just wanted a call, a nod that he was at least in the conversation.

The most successful UFC heavyweight champion of all time told ESPN on Wednesday that the UFC never contacted him to offer an opportunity at the interim heavyweight title earlier this month. Instead, Ciryl Gane and Derrick Lewis fought for the interim gold at UFC 265 on Aug. 7. Gane won by TKO to take the belt — and likely set up a title unification bout with undisputed champion Francis Ngannou.

“It does bother me, because I just wish they would have at least came to me,” Miocic said at Revolution Fight and Fitness, where he was promoting the partnership between Modelo and the UFC to renovate gyms across the country. “Even if I wasn’t able do it, I would have just loved to be given the opportunity. I think I deserved it. But I’m not gonna bitch and moan about it.”

Miocic said he will fly to Las Vegas in September to have a sit-down meeting with UFC president Dana White which will decide his next steps. Miocic said he’ll “100%” tell White directly about his feelings that he was snubbed.

“I just have to sit down and have a conversation with him,” Miocic said. “And everything will fall into place.”

Ngannou knocked out Miocic at UFC 260 on March 27 to win the title. Miocic (20-4) is a two-time UFC heavyweight champion with four title defenses, the most in the division’s history. The ideal scenario, Miocic said, would be to get a trilogy fight with Ngannou for the title. Miocic defeated Ngannou via unanimous decision at UFC 220 in January 2018.

“Getting my rematch and getting my belt back,” Miocic said. “That’s the only way I see it.”

Leading into Ngannou vs. Miocic 2 in March, White said the winner would likely get Jon Jones, the former light heavyweight champion and all-time great, as his next challenger. Instead, the UFC slid Lewis into that spot. When Ngannou was unable to fight Aug. 7 in Houston, Lewis’ hometown, Gane was tabbed and an interim title was put on the line for the headlining bout.

Miocic said he’s not even sure he would have taken the interim title fight, because it came together so quickly and his wife, Ryan, is due soon with the couple’s second child. But he at least wanted “a seat at the table.” Miocic said he didn’t even watch Gane vs. Lewis. He feels like Gane is “tough,” but “definitely beatable.”

White said earlier this month that Miocic was open to fighting Jones next. Miocic did not deny that, but said the UFC never presented him with a formal offer. Sources told ESPN that Jones is not interested in that bout at the moment.

As for why he was not called earlier this summer or why an interim title was even created when Ngannou just won the belt five months ago, Miocic said he could not be sure of any of it and the UFC has its reasons for doing things.

“I have no idea,” Miocic said. “I’ve seen it for years. If I knew, I wouldn’t be a fighter; I would be a matchmaker. … We’ll have a sit-down come September with Dana and figure everything out.”