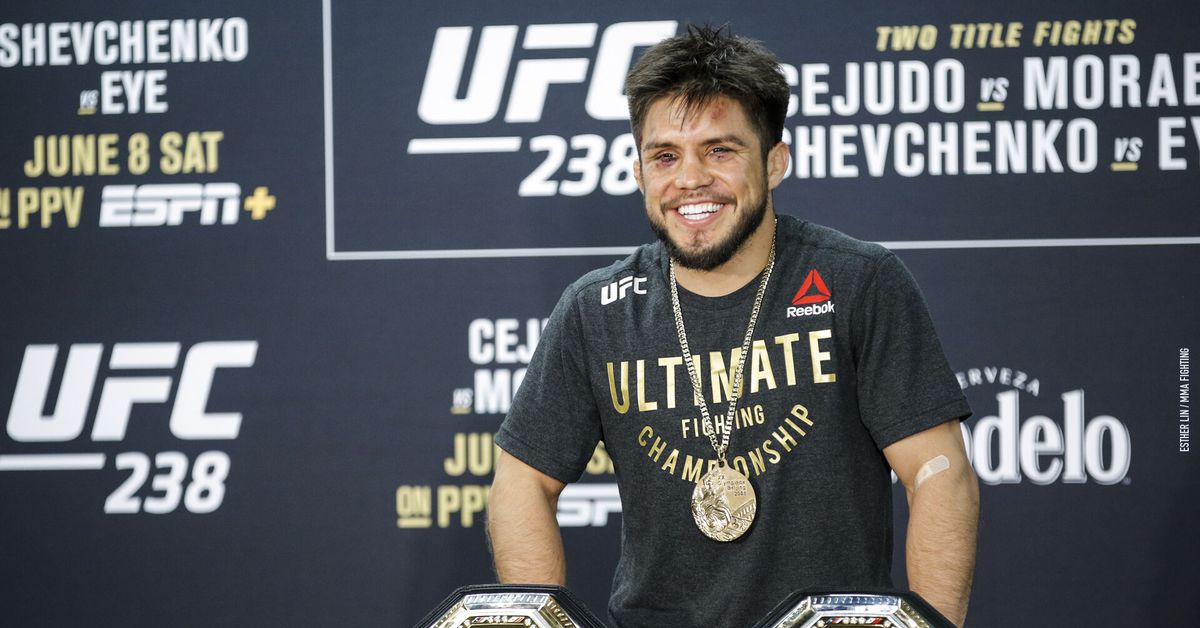 At only 21 years old and fresh off an Olympic gold medal win at 125 kg in the Tokyo games, Gable Steveson has the combat sports world at his finger tips. Since winning gold last month, Steveson has hinted at a possible move to MMA, courting UFC President Dana White and saying “who wouldn’t want to be the baddest man on the planet?” It’s an enticing proposition for the budding star and one that fellow Olympic champion Henry Cejudo understands better than most, which is why Cejudo is taking the time to offer his brother-in-gold some advice on how to proceed.

“I actually talked to Gable yesterday,” Cejudo told TMZ Sports. “I’m just giving him pointers, saying listen, you’ve got your manager, you’ve got your agent but you’ve got to strike while the iron is hot. You’ve got to push them, you’ve got to work, and whatever it is you decide to do, you’ve got to focus in on that and actually have a game plan because you cannot just try to dabble in all of them. A master of all trades is a master of none. Focus on one and then go to the others. I think he should do two years here, two years there, and then decide because he really does – he’s 20 years old and he has the ability to do all of them.”

Cejudo also won the Olympics at only 21 years old, taking gold at the 2008 Beijing games at 55kg. And like with Steveson, after his win Cejudo had a litany of choices before him. Ultimately, Cejudo moved further into combat sports where he also excelled, eventually claiming both the UFC flyweight and bantamweight titles, and Cejudo believes Steveson can be just as successful in MMA, that is, if the UFC would make it worth his while.

“The UFC can’t afford him,” Cejudo said. “I’m sorry, they can afford him but they’re not gonna pay him, unfortunately. I do believe in the next couple of years he could beat a guy like Jon Jones or even Francis Ngannou. He’s the biggest threat because of his wrestling base which is extremely scary…

“He’s a real heavyweight. If you were to put him in there right now, Jon Jones would hurt him, Francis Ngannou would hurt him. I’ve been there before. When I first fought Demetrious Johnson, I had already had standup and I got knocked out at 2 minutes and 36 seconds. So you do have to respect the game.”

One of the issues for the UFC though is that they aren’t the only players in the Gable Steveson game. Steveson has also shown an interest in making the move to professional wrestling and the WWE has shown an equal interest in the charismatic young champion. And of course, it’s possible Steveson continues down his amateur wrestling journey. At only 21 years old, and with two years of collegiate eligibility still remaining, Steveson could continue to wrestle for Minnesota and prepare for another Olympic run in 2024 before making a career change. Really, the world is Steveson’s oyster right now and Cejudo says that the biggest thing the young champion needs to do is simply make up his mind, and if it is MMA that he settles on, Cejudo had some more advice to offer Steveson.

“What Gable Steveson needs right now, he needs time,” Cejudo said. “Whatever he decides to dedicate himself to, he needs two years, even for the WWE. He could probably fast-track the WWE because it’s stunts and it’s an act. But if he’s gonna go back to wrestling, he needs to go back immediately for amateur, Olympic-style wrestling. Or he’s gonna have to start training. I would go the Bellator route and maybe go to these smaller shows to build him up and then eventually take it to the UFC where they can put him against a top-five opponent right away and eventually fast-pace him to the title.”

Backtrack. Jared Cannonier clears up ‘broke’ remark after latest UFC win: ‘I would like to get paid like an elite-level athlete’.

Promotion. Jake Paul plans to hunt down Tyron Woodley and knock him out: ‘I’m a real killer in there’.

Beef. Conor McGregor continues to take shots at Dustin Poirier: ‘I bounced your head off the canvas like a basketball’.

Lookin’ for a fight.

Vinc Pichel getting on TMZ.

The Fighter vs. the Writer. Michael Bisping discusses Woodley-Paul and Conor McGregor feud.

Despite having said it would make a difference, full FDA approval means nothing to Michael Chandler.

I don’t want it. FDA approval or not. Real enough for you? I have no problem with people getting it. We all have a choice…this is mine.

This is why raw numbers don’t determine outcomes.

Hey man not sure when your plan is to get another fight but if your looking at end october or early nov im in, nothing but respect. Cant get anyone else to say yes and your resume shows you never shy from a challenge @KelvinGastelum

This place has character.

Thanks for reading and see y’all tomorrow.

Who wins the TUF finale this weekend?