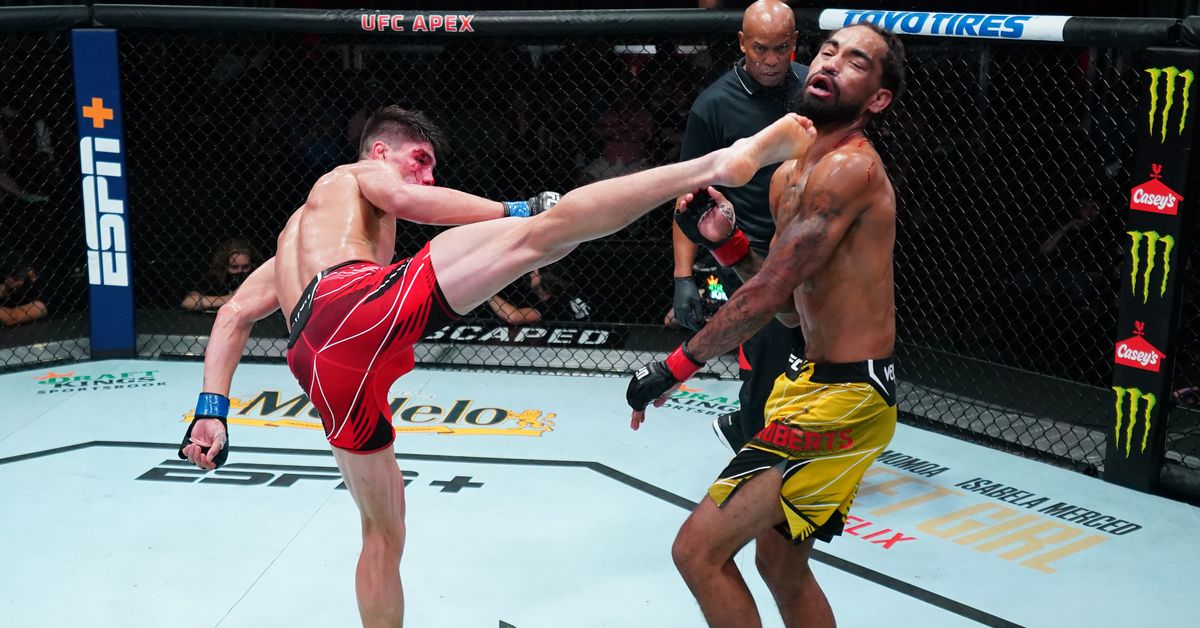 Ignacio Bahamondes was well on his way to a decision over Roosevelt Roberts – five seconds, to be exact.

Then Bahamondes unleashed a wheel kick, and Roosevelt fell hard on the canvas after taking the shot direct to the chin in the UFC Vegas 34 preliminary bout. The official time of stoppage was 4:55 of the third and final round.

Check out the highlight-reel finish below.

Bahamondes had auditioned spinning attacks plenty of times over the 14 minutes he spent with Roberts. But apart from a few backfists, they were aimed to the body as Roosevelt closed distance, repeatedly trying to tie up and transition to a takedown.

Roosevelt had just tried again to clinch up and make something happen after slowly wilting under his opponent’s striking pressure. Apart from a few stiff rights here and there, not much seemed to slow down Bahamondes, certainly not a cut that turned his face into a crimson mask.

Bahamondes was a step ahead at every turn, mixing up his attacks and using diversionary punches to keep Roosevelt guessing when to bite. His best shot up to the final seconds was his straight right hand, which repeatedly clipped the chin. Roosevelt looked at the clock after his final clinch was stuffed, perhaps expecting to ride out the final seconds in peace. He would have no such luck.

Bahamondes bounces back after a split call loss to John Makdessi in his previous outing and puts himself in prime position for a performance bonus. Roberts continues to slide with his second straight setback after a first-round submission loss to Jim Miller.

Anthony Smith vows to never miss weight again after coming in heavy as UFC 283 backup
Matt Brown: ‘I’m a savage motherf******’, but ‘I would have stopped’ Lauren Murphy vs. Jessica Andrade
Conor McGregor accused of attacking woman on his yacht in July: ‘He is a criminal’
Sanchez Huge Underdog Against Trout
Conor McGregor gets offer to coach The Ultimate Fighter: ‘I like it’