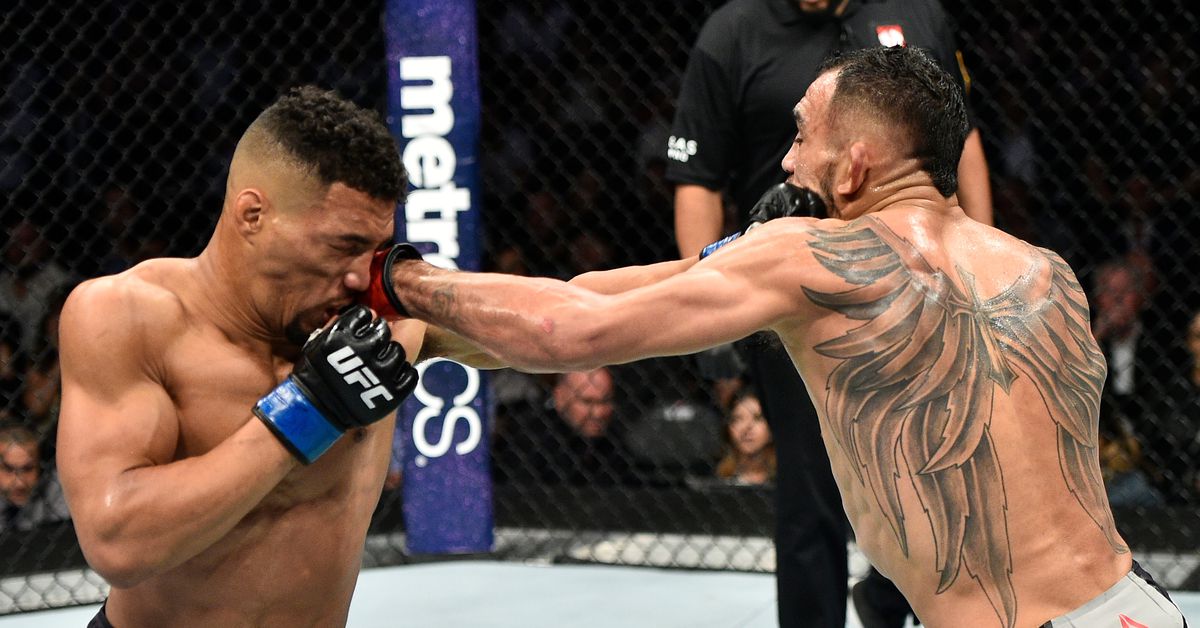 Unless something changes dramatically in his next performance, Tony Ferguson’s fall from grace will standout as a particularly brutal one. The former interim kingpin set a Lightweight record with his hugely impressive, multi-year win streak, but his last three bouts have been painfully one-sided in the opposite direction. At 37 years of age, “El Cucuy” just doesn’t seem to pose the same threat he once did.

It’s one thing for Khabib to dunk on his “aging” former rival — those two never actually fought. Kevin Lee, on the other hand, was strangled in his bid for the Lightweight title by Ferguson, but he’s nevertheless uninterested in getting that one back due to Ferguson’s decline.

“That was a fight I was interested in up until I saw him get dismantled by Oliveira,” Lee explained to James Lynch. “Especially on the ground. That one would hurt my heart a bit, because I would beat him so bad that it would take away from our first fight. I would do it; easy money is easy money. But, I think he’s too far gone, too far over the hill. I don’t like beating up on people that don’t put up a good fight.”

Lee was interested in the bout as recently as February 2021 but no longer. Up next for Lee is a return from major knee surgeries as a Welterweight, as he’ll face late replacement Daniel Rodriguez on August 28. Lee should probably win that bout before casting further stones, as “The MoTown Phenom” has lost three of his last four bouts.

As for Ferguson, he remains unbooked.

Kelvin Gastelum managed to make weight in the end, but man, any hopes of him ever returning to Welterweight (which should be reasonable for his frame) are foolhardy.

Gilbert Burns reluctance to sink into the ice bath is very understandable.

Bellator’s abundance is Russian talent is starting to pay off in excellent match ups. Koreshkov and Khabilov are killers!

Gable Steveson is keeping all his options open.

This is indeed a quick, accurate recap of Kayla Harrison’s recent PFL performances.

Clay Guida was pretty deep into his professional career before crossing into the Octagon, but he’s still set some records!

At #UFCVegas34 Clay Guida will be competing in his 31st UFC bout.

A bunch of cool angles on the shin-to-the-ear connection! High kicks over the punch are nasty.

Once the lapel is under the chin, danger!

One Championship’s Nguyen Tran Duy Nhat injures his foe’s lead leg then pounces on it:

Midnight Music: It’s been four years since Lorde’s excellent LP Melodrama, but the New Zealand pop star released her follow up Solar Power today. There are some serious ‘70s pop vibes on this thing!

Dana’s ‘Secret Sauce’ Saved Him From Slap Sanctions
Conor McGregor gets offer to coach The Ultimate Fighter: ‘I like it’
McGregor denies assaulting woman on his yacht
Tony Ferguson Says He’s Been Offered To Coach TUF With Conor McGregor
MMA coach Duke Roufus calls for culture shift in stopping fights: ‘It’s your job to protect the fighter’