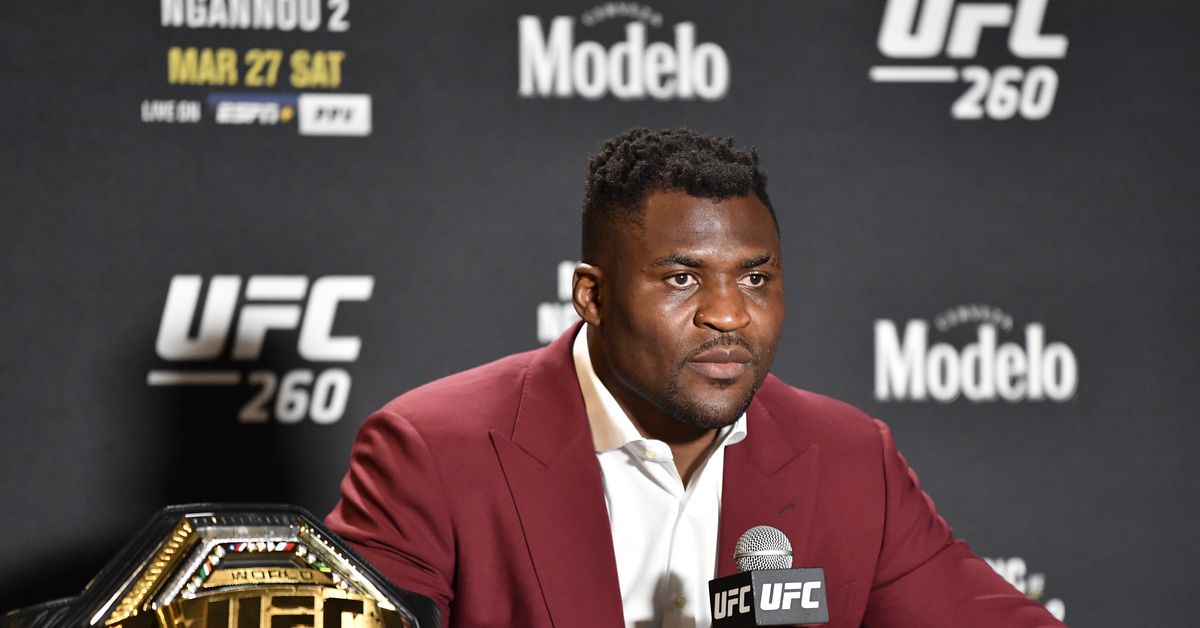 Francis Ngannou isn’t exactly sure where he stands with the UFC right now.

It was a bizarre sequence of events that led to that fight even happening after Ngannou told the UFC he wouldn’t be ready to compete again until September and the promotion ultimately deciding to introduce an interim title one month earlier to help build the August pay-per-view.

The entire situation has left Ngannou feeling out of sorts with the UFC, which is now a place he expected to be after finally claiming the heavyweight title earlier this year.

“Yes. I have that feeling [I’m being disrespected],” Ngannou told GQ. “Just recently they gave me the UFC heavyweight champion, and months later they’re talking about someone else being the champion. Sometimes I’m not even sure if I’m really the champ or not. It’s really confusing.”

According to Ngannou, he was surprised when the UFC announced the interim title fight between Gane and Lewis after he had discussions with them about making his return in September.

While rumors had swirled that Ngannou would defend his title August nothing was ever confirmed and the UFC ultimately decided to move forward with booking Lewis in his hometown with the event scheduled in Houston.

“I think it was all business, and the UFC wanted to do a pay-per-view in Houston,” Ngannou explained. “It wasn’t the right timing for me, but they wanted to do it no matter what. Just before that, they were asking me if I was ready to fight in September and I told them I’d be more than ready.

“Then, suddenly, we just saw they had an interim title…I don’t know what truly happened. It’s all from the UFC’s end. They will be the only ones who know what happened.”

After the interim title fight was announced, UFC president Dana White attempted to justify the matchmaking by saying that Ngannou was free to do whatever he wanted and once he was ready to fight again, the promotion would book him.

Unfortunately, White still took a mountain of criticism thanks to the incredibly quick turnaround for Ngannou to defend his title just a few months after winning the belt while other UFC champion had been out of action for far longer.

None of made much sense to Ngannou but when it comes to the UFC, that’s nothing new to him.

“There’s one thing: if you say you understand the UFC, and how they do business, that means you don’t understand sh*t,” Ngannou said with a laugh. “It’s just like that: it can be very spontaneous, premature, and decisions are out of nowhere.

“They just pop up like that: boom! But at the end of the day, things will get done. It’s just a matter of time.”

Of course this isn’t the first time Ngannou has been at odds with the UFC but he’s obviously not afraid to stand up for what he believes is right.

Ngannou revealed a previous situation with his promoter over a contract he signed that wasn’t in his best interest and he promises never to do that to himself again.

“There’s a lot going on behind the scenes, [but] people don’t see it and they have their own opinion,” Ngannou said. “Before my last fight, the UFC wanted me to sign some contract and that contract wasn’t right. I didn’t sign that contract and I feel like they weren’t happy about that. I signed a contract before, and it didn’t play out very well on my end.

“So, in order to sign another contract I think it’s my right to at least look out for myself and get what is right for me to fix whatever was the mistake in the previous one. And if someone doesn’t believe they should fix their mistake then that means that person is not looking for anything good for you.”

In the end, Ngannou fully expects to come to terms on the fight against Gane to unify the title but he’s never going to claim to be able to predict what the UFC is going to do next.

“I am the heavyweight champ! And I want to be the UFC heavyweight champ,” Ngannou proclaimed. “But in this game, as far as you go, you discover how political it is. The business side of it is not very nice—it’s not as easy as the sport itself.

“Before the [Stipe Miocic] fight, the only thing the UFC was talking about was how the winner of Stipe and I would face Jon Jones, and that never came along. And here we are: with an interim title and everything.”