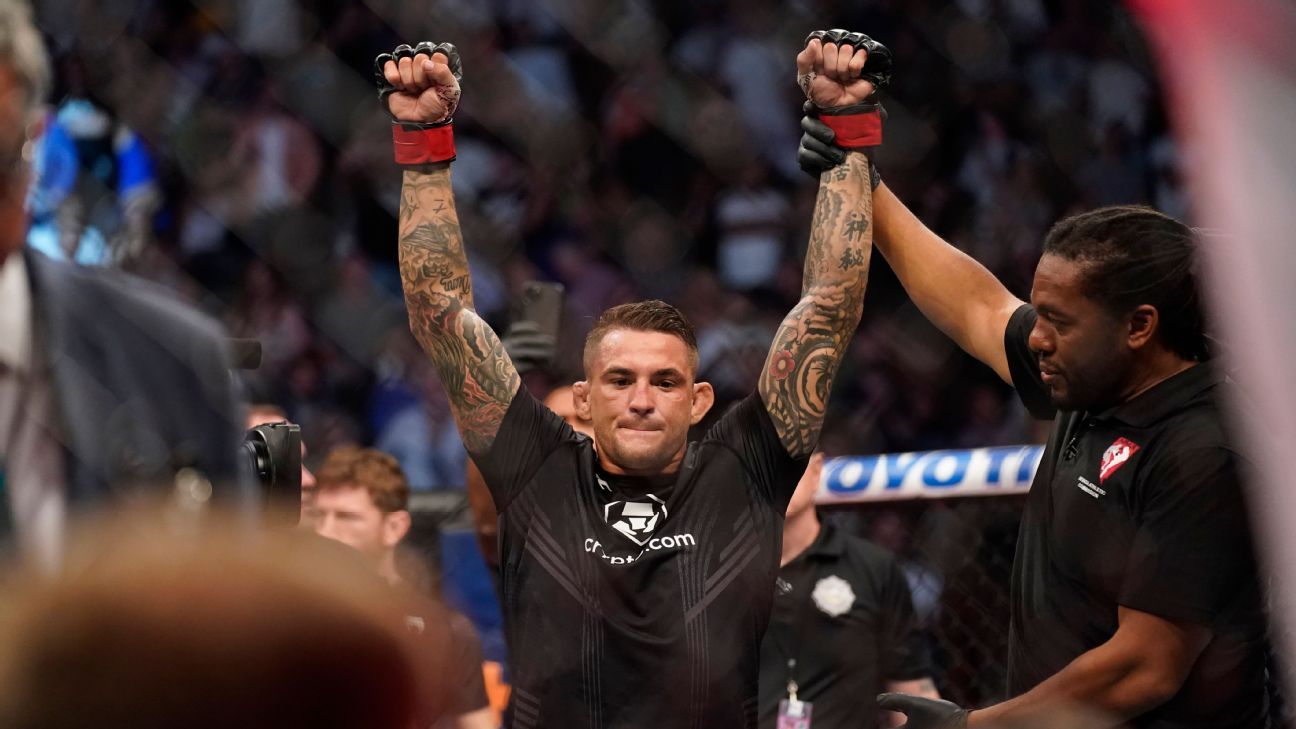 After a rare off weekend in the world of UFC, action returns to the UFC Apex in Las Vegas on Saturday as middleweights Jared Cannonier and Kelvin Gastelum each try to come back from losses to Robert Whittaker in their most recent bouts. While it would seem to be more pressing for Gastelum, who has lost four out of five — albeit against the top fighters in the division — when it comes to factors including age and urgency, whether Cannonier’s UFC journey will ever include a title shot could well hinge on winning this fight.

Mark O. Madsen has similarly lofty aspirations in the lightweight division, and he steps into Saturday’s co-main event — looking to move his record in the UFC to 3-0 — against 15-year UFC veteran Clay Guida. As he looks to climb the ranks in a deep 155-pound division, a win over a familiar face will certainly help, but how much?

ESPN’s No. 5 welterweight, Jared Cannonier, and Kelvin Gastelum look to get back on track after each lost to Robert Whittaker in their most recent fights.

Dustin Poirier is already there, sitting as the No. 1 contender in the lightweight division. Poirier was there before he elected to fight Conor McGregor for the third time, which seemingly set him up for a championship fight against Charles Oliveira. But buzz is starting to build around another high-profile, non-title opponent for Poirier — Nate Diaz. Could Poirier once again forego a title shot?

Yair Rodriguez, on the other hand, seems supremely focused on getting himself a title shot in the featherweight division. His previously scheduled bout against Max Holloway is still searching for a new date later in the year, but after almost two years out of the Octagon, would a win over the former UFC featherweight champ put Rodriguez at the top of the list to challenge the winner of Alexander Volkanovski vs. Brian Ortega?

Our panel, featuring Brett Okamoto, Jeff Wagenheim and Carlos Contreras Legaspi, is here to separate what’s real from what’s not when it comes to the biggest stories of the moment in the UFC.

Dustin Poirier‘s next fight will be against Nate Diaz

Okamoto: Oh, man. This is a tough one. Here’s the deal. Diaz wants to fight Poirier. It’s obvious. Just look at his social media. He’s picking a fight.

Does he need a fight against Poirier? Nah. Diaz has options. He always does. But that’s the one that interests him the most right now.

Likewise, Poirier wants to fight Diaz. Why wouldn’t he? It’s a big fight. They were supposed to square off in 2018, but Diaz was butting heads with the UFC, Poirier was nursing a hip injury, and at the end of the day, the fight never happened. Each side blames the other for it falling apart. It’s a fight that, on the surface, doesn’t make much sense, but fan interest would be sky high by the time it happened.

The question is, how interested is the UFC in making it? Poirier has a claim to being the best lightweight in the world, and a fight between Poirier and lightweight champion Charles Oliveira is the most obvious to make for the division. I could really see this going either way. It’s nice to see Poirier and Diaz have so many options, but if you just look at their social media exchanges, it’s obvious their main interest is fighting each other — which makes me lean (ever so slightly) toward real. This will be the next fight for both.

Okamoto: You know what? I’m going to take the surprising answer here and say this is not real. Look, it’s very easy to say Saturday is a “must-win” for Gastelum. He has lost four of his past five. He’s close to falling out of the UFC’s top 10 rankings at middleweight. Cannonier, meanwhile, is coming off a loss, yes, but he’s 3-1 in his past four. And the champion of the division, Israel Adesanya, has expressed interest in fighting him.

So, why would I say this fight is actually more important for Cannonier? For a few reasons. First off, age. Cannonier is 37. Gastelum is 29. If Cannonier is going to fight for a championship, and collect on any big money fights, his window to do so is much smaller than Gastelum’s. And beyond that, despite Gastelum’s recent skid, he keeps getting big opportunities. He’s popular. Even if he were to lose his top-10 ranking, it feels like he’s one of those guys who is always just two wins away from a title shot. Cannonier doesn’t have that luxury. If he drops to 0-2 in his past two appearances, his brand falls off a lot more than Gastelum’s would.

It’s certainly a big fight for both, and if Cannonier wins, he’s very close to getting a title shot in 2022. But in terms of who has the most to lose — surprisingly, I think it’s Cannonier.

If he beats Max Holloway, Yair Rodriguez deserves a title shot despite a 2-year layoff

Legaspi: Very real. Anyone who is capable of beating Max Holloway at this stage of his career can compete for the belt. Rodriguez climbed the UFC’s featherweight rankings from No. 7 to No. 3 during his long absence, which was caused by a combination of injuries and a six-month suspension from the U.S. Anti-Doping Agency. Then his matchup with Holloway, the former UFC featherweight champion, was pushed back because of an injury on Holloway’s side.

Rodriguez is not going to outbox Max — everyone saw what happened when Brian Ortega and Calvin Kattar went in that direction, with the high volume of punches Holloway showed he can connect on over the course of a five -rounder. If Rodriguez can establish his distance and make room for his switch kicks or spinning fists and elbows, he can cause some trouble. A win over Holloway will require something spectacular, and fortunately that’s familiar territory for Rodriguez, who has seven bonuses in 10 UFC fights and two of the most spectacular finishes in the history of the division, over Andre Fili and Chan Sung Jung.

Holloway is a -400 favorite and the No. 1 contender in the division, and it only makes sense that if Rodriguez can pull off the biggest win of his UFC career, he will instantly become a legitimate contender to Alexander Volkanovski or Brian Ortega, even with the lack of activity over the past few years.

Mark O. Madsen is poised to prove himself as a lightweight title contender.

Wagenheim: Madsen won a silver medal in wrestling at the 2016 Olympics, and his specialty was Greco-Roman, the style that seems to translate best to MMA. Randy Couture and Dan Henderson are a couple of Greco guys who transitioned well to the cage. Now comes Madsen, who is 10-0 in MMA. Is he on the verge of something big?

He might be, but I seriously doubt that Saturday’s fight will be his springboard, so for now, I’ll say, not real. Madsen’s opponent is Clay Guida, an aggressive, tough veteran of 56 pro fights who’ll test him. But Guida has lost three of his past five, and he’s less than four months away from his 40th birthday. A win over him would not send Madsen’s stock soaring. A loss, on the other hand, would halt whatever momentum he has built in his two UFC bouts.

Madsen competes in a stacked 155-pound division. It’s a long journey to the top, although even at age 36, he has time to get where he is hoping to get. The Guida fight will be either a roadblock or a small step in the right direction.