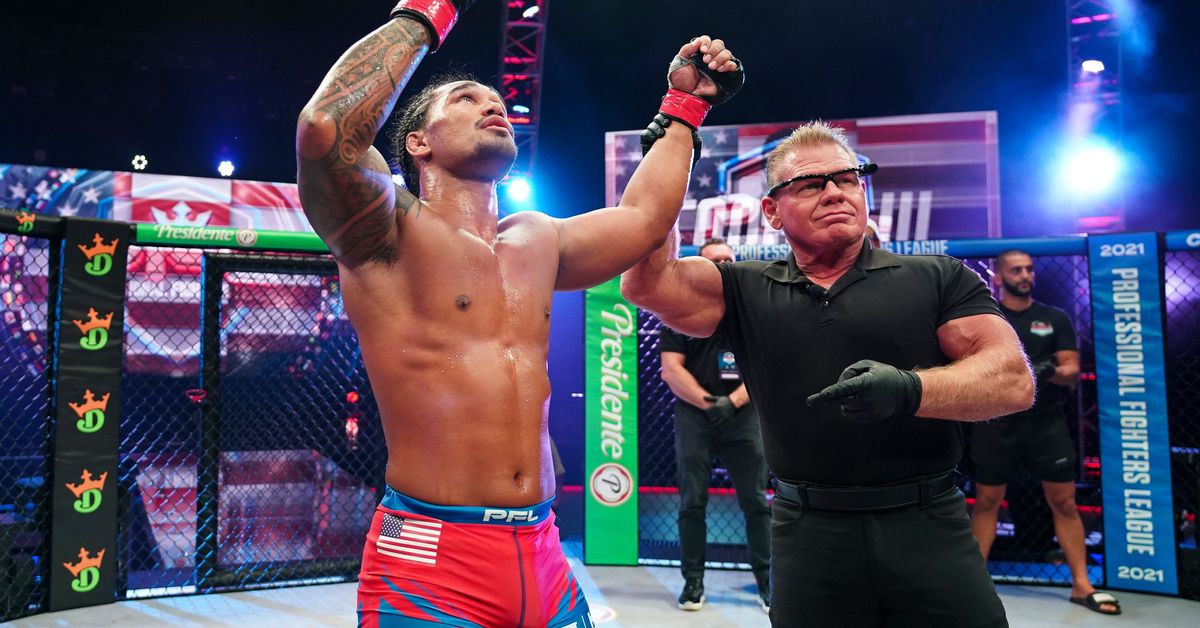 It may be time to start calling him “Mr. Consistent,” because all Ray Cooper III does is win fights and bulldoze his way into PFL championship bouts.

Cooper (23-7-1) utterly had his way with former Bellator welterweight champion Rory MacDonald (22-8-1) en route to a surprisingly one-sided decision win in Friday’s PFL playoffs main event, which took place at the Seminole Hard Rock Hotel & Casino in Hollywood, Fla. With his victory, Cooper punched a ticket to his third consecutive PFL season final — and ensured himself a shot to defend the title he won in season two’s PFL welterweight tourney.

“I’m not surprised one bit,” said Cooper. “I knew the whole thing, the whole part of his gameplan. But nothing but respect for Rory. I watched him when I was young, he’s an awesome fighter. And yeah, I told you guys. You guys gotta start listening.”

Cooper’s wrestling was the story of the fight from pillar to post. The 28-year-old Hawaiian scored takedowns in every round and smothered any hint of offense from MacDonald. Aside from two questionable standups by referee Gary Copeland, MacDonald was totally unable to get back to his feet. Cooper’s best moment came in the opening seconds of the final round when he landed a heavy combination that forced a desperation takedown attempt from MacDonald, which Cooper ultimately reversed to retake his top position.

Awaiting him in the welterweight finals with $1 million on the line will be a familiar foe, the same man who defeated Cooper in 2018’s season one finals, No. 4-seeded Magomed Magomedkerimov (29-5).

“I knew this was going to happen,” Cooper said. “This was my plan. I’m going to run through everybody and I get him next. You’re not going to be able to get away this time.”

Magomedkerimov steamrolled over injury replacement Sadibou Sy (9-6-2) in the night’s co-main event to win a unanimous decision (30-27, 30-27, 30-27) and advance to his second welterweight final of PFL’s three seasons. In a grinding and sluggish fight, Sy had no answer for Magomedkerimov’s takedown acumen, and though neither man scored much — if any — substantial offense, Magomedkerimov was in complete control throughout the bout.

The 31-year-old Russian now holds an undefeated 10-0 record inside the PFL cage and very well could’ve been fighting for his third consecutive championship had he not been forced to withdraw from season two’s tournament due to an injury he suffered in the quarterfinals.

Elsewhere on the night, the storybook run of No. 2-seeded lightweight Clay Collard (20-9, 1 NC) ended at the hands of No. 3-seeded Raush Manfio (14-3). A good friend and teammate at American Top Team of two-time PFL season champion Natan Schulte, Manfio won a controversial decision (29-28, 29-28, 29-28) to advance to the lightweight season finals.

Collard started strong and often beat Manfio to the punch with heavy volume and a stiff jab in the opening round, however Manfio began to turn the tide in the second and third frame. The 29-year-old Brazilian landed several hard right hands and combated Collard’s volume with a steady diet of powerful one-shot punches. The final striking stats ended decidedly in Collard’s favor — 96-56 — but in the end, the judges’ favored Manfio’s damage more.

“The belt is his home! He’s going to be the champion!” shouted a joyous Schulte, who invaded Manfio’s post-fight interview after watching his training partner from cageside.

Meeting Manfio in the lightweight final will be the man Manfio emulated in the gym to help Schulte prepare for last season’s finals: No. 1-seeded Loik Radzhabov (15-3-1).

Radzhabov advanced to his second straight PFL lightweight final after exacting revenge on No. 4-seeded Alexander Martinez (8-2), who’d previously beaten Radzhabov via split decision in the pair’s first matchup earlier this season in April. Friday’s rematch belonged to Radzhabov though, as the 30-year-old Tajikistan native captured a hard-fought unanimous decision (30-27, 30-27, 29-28) in the opening bout of the main card.

Radzhabov scored takedowns in all three rounds and was relentless with his forward pressure. Martinez was never out of the fight, and even almost snatched a Hail Mary guillotine choke during a wild scramble in the third round, but Radzhabov ultimately was too strong and too consistent for his Paraguayan counterpart. Now, after fighting all the way to season two’s lightweight finals only to lose a one-sided decision to Schulte in 2019, last season’s runner-up vowed to make the most of his second shot at PFL glory.

“I’m putting big hopes on the final fight,” said Radzhabov. “This is the time that I have to take the title. I have to make this million (dollars). I have to bring this belt and the title to my home country Tajikistan. People are watching and I want them to be proud of me.”

Check out complete PFL 7 results below.