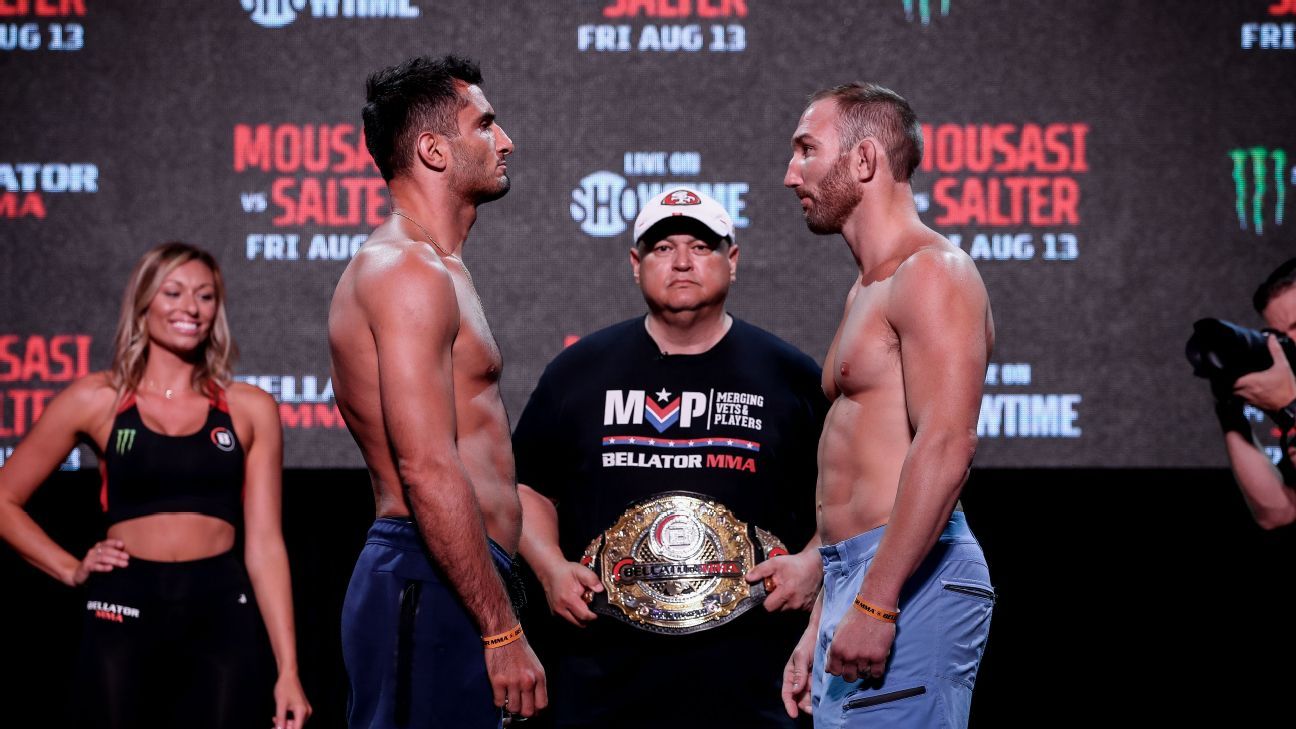 Mohegan Sun Arena is an ocean away from Gegard Mousasi’s hometown in the Netherlands. But the casino resort venue in Uncasville, Connecticut, has provided him with the comfort of home.

Mousasi made his Bellator debut in the building in 2017, defeating former middleweight champion Alexander Shlemenko. That earned the former UFC contender and Strikeforce and Dream champ a title fight, which he won — not at Mohegan. But Mousasi was back in those familiar surroundings again last October, by then over a year removed from having dropped the Bellator belt. On a crisp New England fall night, Mousasi had a chance to reclaim his championship. He seized the opportunity.

In a fight for the vacant 185-pound title, Mousasi defeated then-welterweight-champ Douglas Lima to become a two-time Bellator champion.

This Friday in Uncasville, in the main event of Bellator 264, Mousasi makes the first title defense of his second reign. He’ll take on a hot John Salter, who is 8-1 in Bellator with all but one of his wins coming by finish.

Over the last 13 months, as the coronavirus pandemic has limited Bellator’s ability to put on its usual traveling show, the company has held 19 fight cards at the venue on the Mohegan Indian Reservation in southeastern Connecticut. The event two weeks ago in Los Angeles, at which A.J. McKee won the Bellator Featherweight World Grand Prix by dethroning Patricio “Pitbull” Freire, was the company’s first card in the United States in over a year that was not at Mohegan Sun, ending a run of 14 shows in a row at the arena. After Friday, Bellator will venture off to stage fights in South Dakota, London, Phoenix, Moscow and Dublin.

But before leaving “home,” Bellator and its middleweight champion have business to take care of. Here are three questions that Bellator 264 might answer.

Can Mousasi solidify his standing at the top of the mountain this time?

Mousasi was 15 years into his MMA career when, at age 32 and in his 52nd pro fight, he became champion with a first-round TKO of Rafael Carvalho at Bellator 200 in May 2018. But barely a year later, after just one successful title defense, Mousasi dropped the belt by majority decision to Rafael Lovato Jr.

Mousasi’s downfall? Lovato, a multiple-time jiu-jitsu world champion, took the Dutchman to the canvas again and again, controlling him there and sapping Mousasi’s energy.

Now Mousasi has the belt back and begins his reign with a title defense against another grappler. Salter, 36, won a NAIA national championship in wrestling in 2007. That same year, he also was a North American Grappling Association national champ. In MMA, he has submissions in 10 of his 18 victories, including seven of his last nine.

Mousasi is well aware of what he’s up against. He prefers to dwell on the danger he presents to Salter.

“This guy needs the takedowns to win the fight. I’m not going to lay down and fight from my back,” Mousasi told reporters this week. “My plan is to get right back up and, if it’s necessary, fight him. If it needs to be a technical standing up [fight], I don’t think he can hang with me there.”

As for the renewed pressure of defending a championship, Mousasi has an interesting take. “I never thought, ‘Oh, I’m defending my belt.’ It’s just, ‘Focus on my opponent,'” he said. “On paper, the belt is on the line. But if you step in the cage, there’s not a belt waving there. You don’t see a belt, so it’s just, ‘Focus on the opponent.'”

Magomed Magomedov is 18-1 and has won five fights in a row, including two Bellator victories during the eight months he’s been with the promotion. For the 29-year-old Dagestani bantamweight, who trains under coach Mark Henry in New Jersey, the only loss of his career came by decision in 2017 to Petr Yan, although Magomedov also owns a victory over the former UFC champion.

Raufeon Stots is 16-1 and riding an eight-fight winning streak, including a 4-0 run since joining Bellator in 2019. The lone defeat for the 32-year-old from Houston, a two-time NCAA Division 2 national champion wrestler, was also in 2017. His loss came via a spinning backfist just 15 seconds into a fight with Merab Dvalishvili, who now is a UFC contender and No. 10 in the ESPN men’s bantamweight rankings.

This clash could very well produce the first title challenger for Sergio Pettis, who won the Bellator bantamweight belt in May.

That could prove to be complicated if Stots wins on Friday as Stots and Pettis both train under Duke Roufus at his Milwaukee gym, Roufusport. However, Stots will not allow that to derail his pursuit of gold.

“I don’t want to fight my teammate Sergio,” he said this week. “But I understand. If I have to fight him, I’ll fight him.”

Then again, there’s been speculation that the bantamweight division might be next for a Bellator Grand Prix tournament.

“The Grand Prix would be an opportunity to get my hands on more people before getting to the belt,” Stots said. “And also that million-dollar prize at the end is, I mean — A.J. looked real nice with a million-dollar check next to him.”

Will Pam Sorenson inject a little life into the women’s featherweight division?

At age 35, Sorenson isn’t exactly new blood. But she is an ex-champ in Invicta FC who signed with Bellator over the summer and makes her debut this weekend. With a dominant performance against Roberta Samad, Sorenson could find herself immediately in position for a big opportunity.

The Bellator women’s featherweight division has something in common with the UFC’s weight class at 145 pounds: They’re both awfully thin. Cris Cyborg is the Bellator champ, and there’s also former titlist Julia Budd. But Budd, who lost her belt to Cyborg last year and has bounced back with two wins since then, recently revealed she is a free agent. She’s said she is considering the UFC and PFL.

If Budd moves on, that would leave the division in dire need of Cyborg challengers. There’d be just Cat Zingano and … whom else? Perhaps Pam Sorenson.