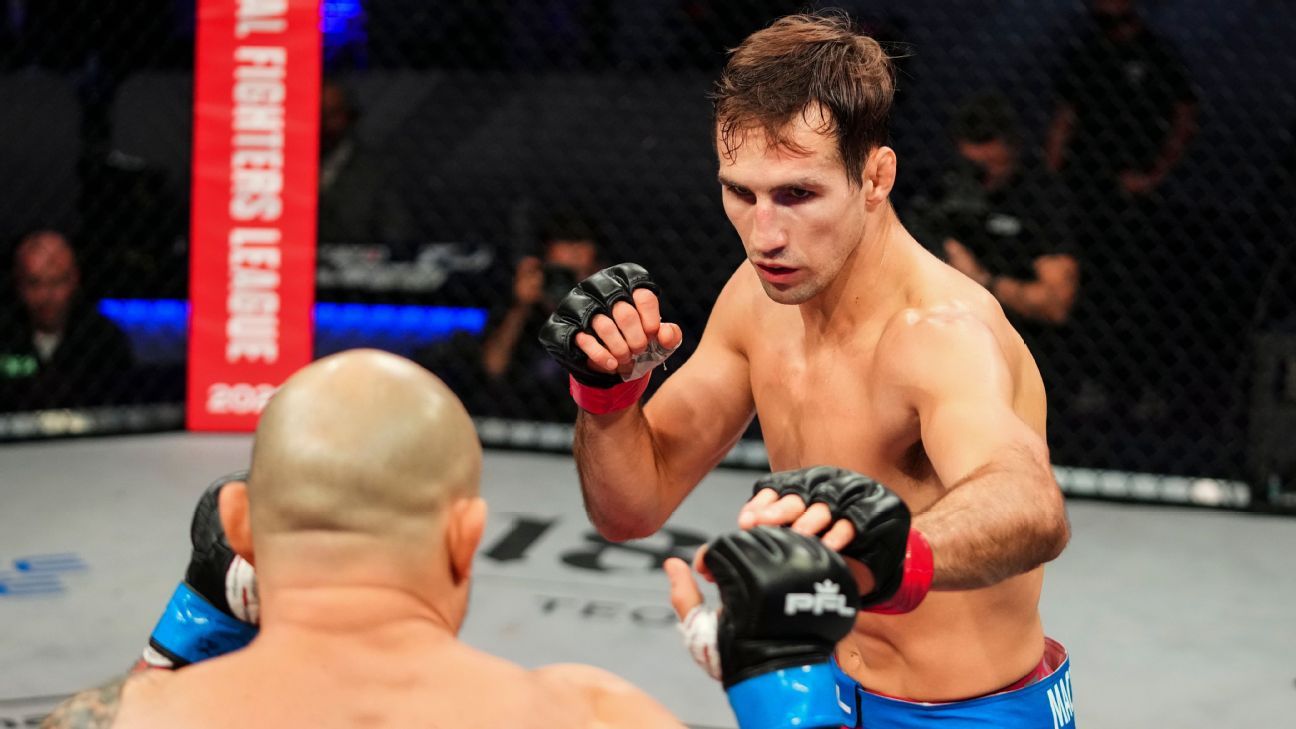 Keeping alive a quest to pocket $1 million would seem to be all the motivation Ray Cooper III really needs as he heads into Friday’s PFL welterweight playoff semifinal (9 p.m. ET, ESPN2/ESPN+). But Cooper does have an added incentive driving his desire to defeat Rory MacDonald.

It has nothing to do with McDonald being the fight company’s shiny new signee, a former Bellator welterweight champion and UFC title challenger brought in to add luster to the 170-pound division. That weight class happens to be headed by Cooper, a finalist in both of the PFL’s two completed seasons. In 2019, he won the championship and the $1 million payout that came with it.

With the 2020 PFL season having been cancelled because of the coronavirus pandemic, Cooper is the reigning, defending champ. And yet all of the attention leading into this season went to MacDonald.

Cooper insists that he is not bothered by sitting in the shadows. “Rory is a well-known guy and has fought a lot of known guys,” Cooper said. “He got the attention because he fought in the biggest organization and he was a champion in another one. I’m looking forward to competing against him.”

So what is it that makes this a grudge match of sorts? To unearth the reason why Cooper regards the bout as something more than just the latest step in his chase for a second million bucks, you have to dig into his roots. Cooper, 28, is from Pearl City, Hawaii, and growing up as an aspiring fighter — and a three-time state champion high school wrestler — in the early 2000s, he found inspiration in watching a certain Aloha State legend perform.

BJ Penn, a former jiu-jitsu world gold medalist and two-division UFC champion, is the greatest Hawaiian fighter ever. His triumphs were numerous and at times larger than life. He moved up from lightweight to dethrone UFC welterweight king Matt Hughes. He fought Renzo Gracie at light heavyweight and Lyoto Machida at heavyweight. But the BJ Penn memory that gnaws at Cooper is from 2012, when Penn lost a unanimous decision to, of all people, Rory MacDonald.

“I’ve gotta get that one back for BJ,” Cooper said. “He was the only Hawaiian guy at the top, so BJ was a big inspiration for me. Me beating Rory this weekend is gonna solidify that.”

That is as close to trash talk as Cooper gets. He is a man of few words and even fewer agitated inflections. Often his quiet words veer toward cliche, such as, “I let my hands do the talking.” But if you’ve ever watched him perform in the cage, you know Cooper speaks the truth.

That is one way — perhaps the only way — that Cooper and MacDonald are alike. Stylistically, as fighters, they are as different as night and day — as in, “say good night” and “let’s ruin your day.” Cooper is all forward-moving violence. MacDonald measures out his break-you-down domination.

Cooper and MacDonald have identical 22-7-1 records, but they arrived there via distinct paths. Cooper has a dozen PFL fights under his belt. MacDonald will be making his third appearance in the PFL after splitting a decade between the UFC and Bellator.

One area of common ground: MacDonald agrees with Cooper on BJ Penn. “I also looked up to BJ as one of the guys who motivated me to get into this sport,” said MacDonald, a 32-year-old Canadian. “I will always remember the night I fought him. That was a pivotal fight in my career that I won’t forget.”

Now MacDonald faces another pivotal challenge. He was one of three prized additions to the PFL roster for this season, and the other two — heavyweight Fabricio Werdum and lightweight Anthony Pettis, both former UFC champs — did not even make the playoffs in their respective divisions. MacDonald, by contrast, has performed well, although he got knocked down a peg when a puzzling split decision went against him in June after he’d largely controlled Gleison Tibau for three rounds.

Cooper can’t help but look ahead to the October finale and a potential matchup with Magomedsharipov, who defeated him for the championship in 2018.

“I’m gonna get through my opponent, and hopefully he gets through his opponent,” he said. “Magomed is the match I want in the finals. I want a chance to right that wrong.”

MacDonald, on the other hand, is fully focused on the here and now. He recognizes the power in Cooper’s hands, making him “a dangerous opponent who I’ve got to take seriously,” MacDonald said. “I’m gonna have to be on my game.”

The closest thing to trash talk to come out of MacDonald’s mouth? “Ray’s got power and aggressiveness on his side,” he said, “but I feel like my skill level and experience will get me the win.”

Welterweight: No. 2 Rory MacDonald vs. No. 3 Ray Cooper III

Welterweight: No. 4 Magomed Magomedkerimov vs. No. 5 Sadibou Sy

Lightweight: No. 2 Clay Collard vs. No. 3 Raush Manfio | Lightweight

Lightweight: No. 1 Loik Radzhabov vs. No. 4 Alexander Martinez | Lightweight