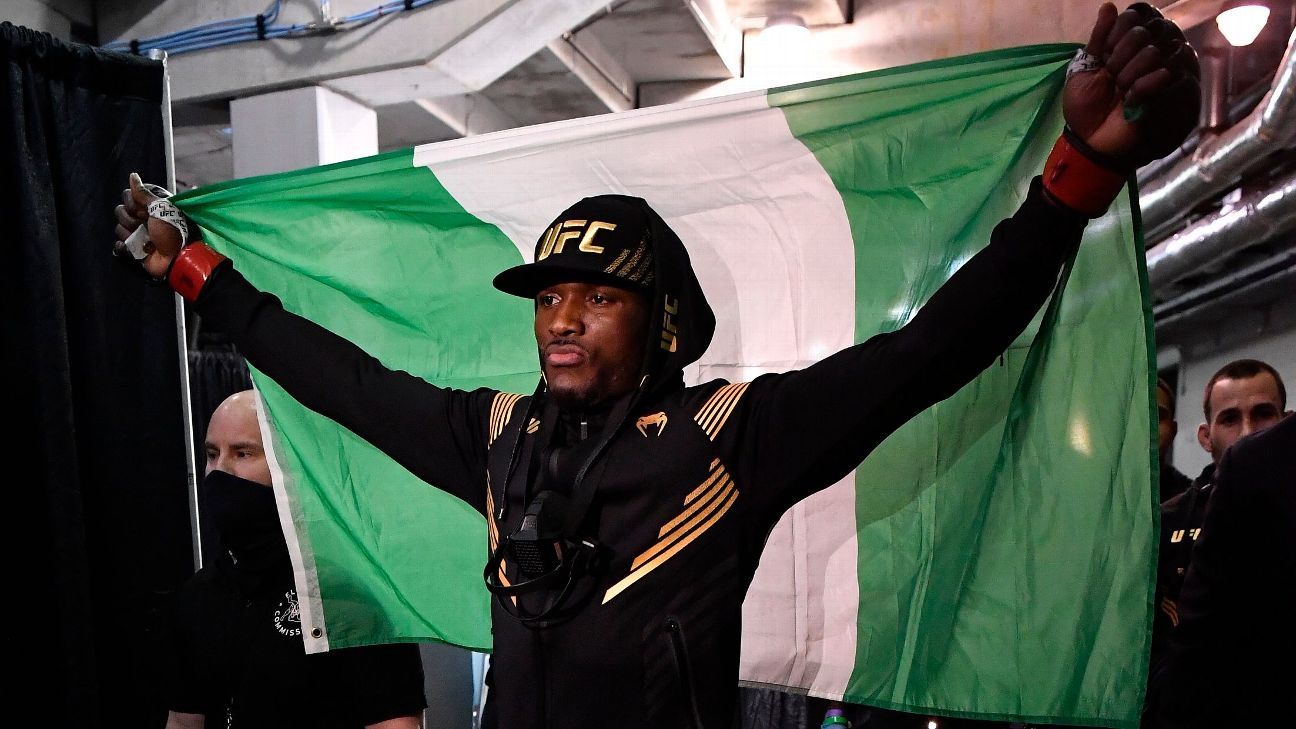 After recently returning to Africa for the first time in nearly 30 years, UFC welterweight champion Kamaru Usman told ESPN that an MMA event on the continent could be even bigger than the legendary Rumble in the Jungle.

Usman, who became the first UFC champion from Africa when he defeated Tyron Woodley in March of 2019, was visiting Nigeria, where he was born, and whose flag he flies proudly when he competes.

“Hosting a UFC event in Africa would be groundbreaking,” Usman, 34, told ESPN. “It would be monumental.

“We all know the significance of the Rumble in the Jungle, the fight with [Muhammad Ali and George Foreman] here in Africa, and how massive that was and I think UFC would easily be bigger than that.”

Usman has since been joined by fellow Nigerian Israel Adesanya, who claimed the interim middleweight belt by beating Kevin Gastellum, before going on to consolidate that by winning the undisputed title of Robert Whittaker.

Cameroonian Francis Ngannou completed the trident of African winners when he claimed the heavyweight title from Stipe Miocic at UFC 260.

This rush of three division champions from Africa has not gone unnoticed, with UFC president Dana White saying on a podcast that he is open to the idea of a fight there, and equally confident of rivalling the Ali-Foreman fight.

White said on the Bill Simmons Podcast: “One of the cool things is right now we have three African champions… One of the many monumental times in my career, but one of the things that I’ve always wanted to do is have a fight in Africa.

“The Ali-Foreman ‘Rumble in the Jungle,’ all that stuff I remember growing up, I haven’t had mine yet.

“But it’s coming. We’re looking at Africa in 2022, so I’m really looking forward to that.”

To put it into perspective, the Rumble in the Jungle in Kinshasa was a monumental success, drawing an estimated 1 billion viewers worldwide to become the most watched live television event at the time, and grossing well over $100 million.

Usman was in Nigeria while Adesanya fought at UFC 263 to defeat Marvin Vettori for the second time and experienced first-hand the long, late hours that Nigerians and Africans keep in order to follow the fights.

It left him even more appreciative of the support, and convinced him that the promotion would be a hit if it came to the continent: “Being able to witness it and basically just go through it and feel what you guys feel, it’s amazing that we have so much support here.

“Because staying up till 4am? I think when the fight came on Israel didn’t finish his fight till almost 5am.

“You know, much respect to all my Nigerian friends, all my African fans… I love and I appreciate each and every one of you guys because you know you guys truly that support right there. And that’s something that we are forever going to be grateful for.”

But the trip was more than just about looking into bringing a UFC event to Africa.

Born in Nigeria, Usman emigrated with his family to the USA as an eight-year-old, but has stayed in touch with the culture and language. So it comes as something of a surprise that despite being the first UFC African champion, he is the last of the three to revisit the continent.

“And I just felt that moving forward, in order for me to get to the next season in my life and be completely happy there, I needed to go back home, I needed to be with my people and feel the energy of my people to just have that feed me to the next phase of my life.”

That energy was amply demonstrated all through the trip as Usman went from state to state, city to city, connecting with people, and serving as an inspiration for young kids.

He was humbled by the attention, saying: “It’s been overwhelming, seeing just how I’m received.

“I’ve always heard of people who can’t walk in the streets because of who they are. As a boy, that was always fascinating to me. But now I’m that guy.

“And so being able to deal with that I still can’t really comprehend it. But as far as knowing that responsibility, I fully accept it. And I understand that the position that I’m in is not just to be famous. I’m blessed to be in this position. And I have to use that platform to be able to touch and affect others.

“I’ve been to a couple of different states now and just getting to see all the different things, the infrastructures that’s been put in place. It’s amazing. It really is. And I think the future is in the right hands is going to be bright for Africa, and Nigeria.”

It was recently announced that Usman’s next bout is set to be against Colby Covington at UFC 268, though the date and location has yet to be decided.