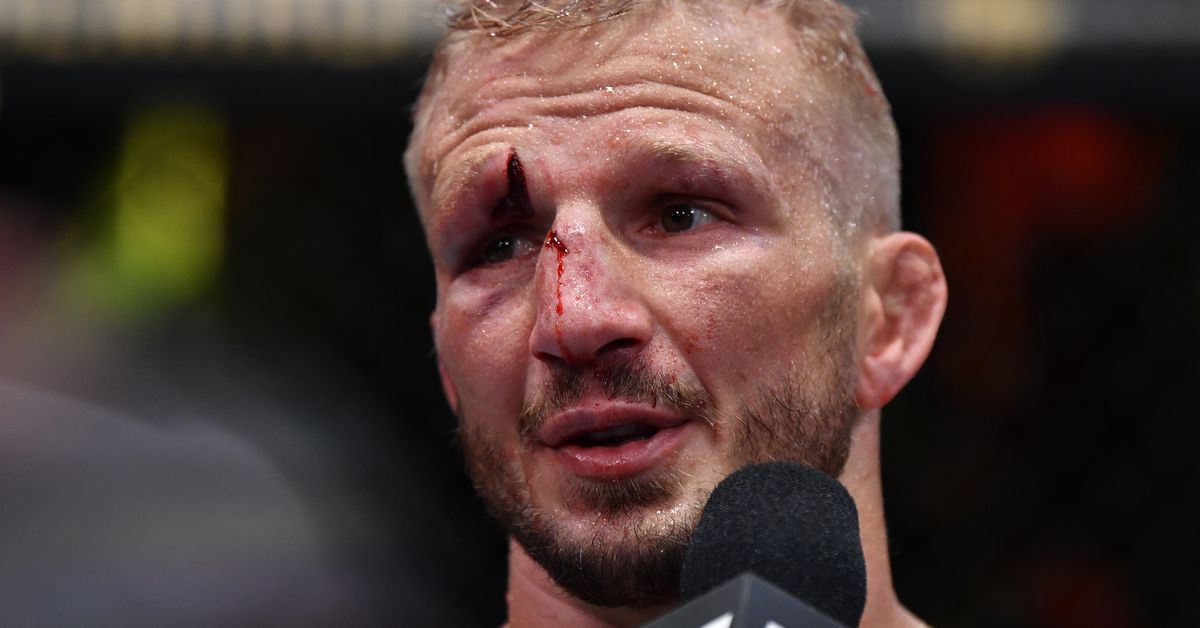 Dillashaw suffered several ligament tears in his left knee in the opening round of his July 24 fight against Cory Sandhagen. The former UFC bantamweight champion ultimately won the bout via split decision, which marked his octagon return following a two-year USADA suspension, however the post-fight injury report issued by the Nevada Athletic Commission gave Dillashaw a potential six-month medical suspension depending on the severity of his injury.

Fortunately, after undergoing surgery to repair his knee last week, Dillashaw said he expects to be back to full health in half of that time.

“I had a medial meniscus bucket handle tear, a lateral meniscus tear, and a PCL tear. Almost everything. I’m just glad it wasn’t ACL. I actually am happy with the results, [because] it would’ve been nine months [of recovery for an ACL tear]. I’m looking at a three-month recovery right now until I can get back to good training, fight for the title at beginning of next year.”

Dillashaw (17-4) is currently the No. 3-ranked bantamweight in the MMA Fighting Global Rankings. A two-time UFC champion, Dillashaw forfeited his belt in early 2019 after testing positive for recombinant human erythropoietin (EPO) ahead of his flyweight title challenge against Henry Cejudo. Dillashaw ultimately missed two years because of his USADA suspension.

Though the 35-year-old’s UFC return against Sandhagen was a successful one, Dillashaw said he knew exactly when he injured his knee in the closing seconds of Round 1.

“I was in, like, a lazy leglock. We were in the 50/50 position, I was completely out of it, but I was just kind of chilling,” Dillashaw said. “I knew I won the round, so I was like f*ck it, I’m just going to sit on top, let the round finish out. But then he turned and started trying to punch me, so I was like, ‘Alright, b*tch,’ so I came back for my own ground-and-pound, right? So I came in hard on my own leg and started ground-and-pounding, and he didn’t get me from the leglock. It was when we got into a scramble and he tried to getting back to his feet, and I tried standing on top, so I leaned my chest over my body, and at the same time, my knees — my LCL just went, ‘pop.’

“It was loud, dude. Like, I’m super surprised he didn’t hear it or feel it because I know I even heard it when it happened. So I knew that I was [hurt]. As soon as the round was over, I limped back to my corner and I sat down and I was like, ‘Dude, my knee is f*cked.’ Instantly, that was the first thing I said. They bleeped it out on TV because it’s ESPN and I said f*ck.”

Despite the early setback, Dillashaw gritted through an injured knee and a nasty cut above his right eye to eke out a five-round win over Sandhagen.

The scoring of the bout has been the subject of controversy since, with many prominent voices within the MMA community — including Sandhagen — arguing that the damage Sandhagen inflicted should’ve taken precedence over Dillashaw’s striking volume. Dillashaw himself admitted he was initially down on his performance after the fight, however after watching it back, he’s confident that the right decision was made.