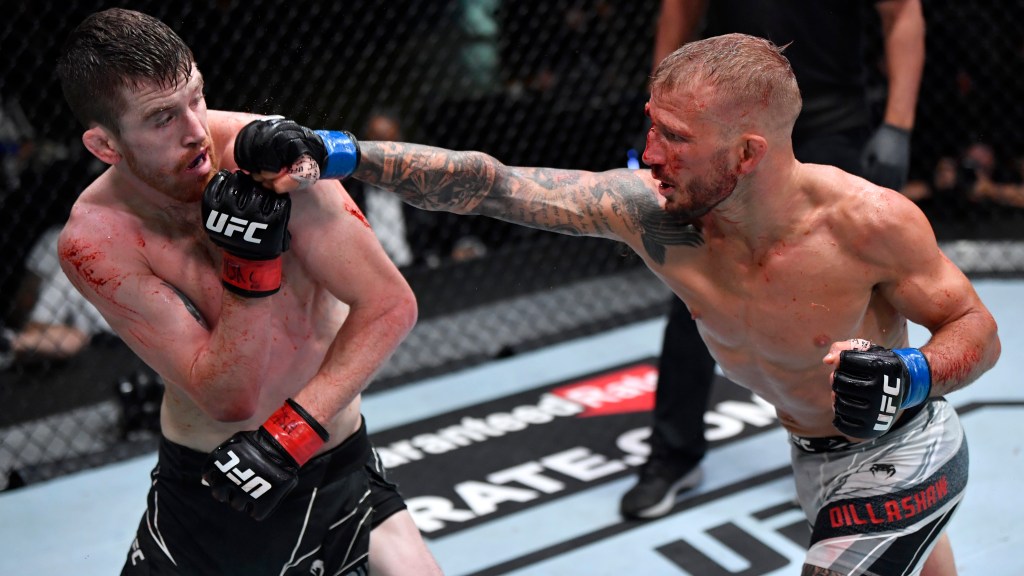 With another action-packed month of MMA in the books, MMA Junkie looks at the best fights from July 2021: Here are the five nominees, listed in chronological order, and winner of MMA Junkie’s “Fight of the Month” award for July.

At the bottom of the post, let us know if we got it right by voting on your choice.

O’Malley landed a remarkable 72 percent of his significant strike attempts en route to a lopsided third-round TKO victory over Moutinho. Both men received “Fight of the Night” honors.

It was an unusual TKO win, as Quarantillo got the referee to call the fight following a wave of strikes thrown from bottom back control. Benitez had his back taken, but was pressing Quarantillo back and not letting him get top position. The stoppage came after an exciting two rounds where Quarantillo delivered a good amount of damage, battering the Mexican fighter.

👊 Puts the finishing touches on an incredible performance! #UFCVegas31 pic.twitter.com/1dOIB7u49I

After spending his previous octagon appearance at flyweight, Paiva moved up and made an immediate impact with a come-from-behind majority decision upset of Phillips in 15-minute war. The scores were 29-28, 29-28 and 28-28.

After more than two years away due to a USADA suspension, former champ Dillashaw put himself right back at the top of the bantamweight division with a split decision victory over Sandhagen in a back-and-forth bout that went down to the wire.

The third round between Jason Witt (19-7 MMA, 2-2 UFC) and Bryan Barberena (15-8 MMA, 6-6 UFC) was bonkers, and from a statistical standpoint, things could have gone either way.

Barberena nearly tripled up on Witt in the striking department, 96-36. But Witt landed eight takedowns and had more than four minutes of control time on the ground. One judge scored the fight a 28-28 draw. But two others had it for Witt to give him the majority nod.

The winner: Dillashaw vs. Sandhagen

Dillashaw returned in style at UFC on ESPN 27 after 30 months away from the cage to defeat Sandhagen by split decision.

Dillashaw, 35, competed for the first time since his hiatus due to a U.S. Anti-Doping Agency suspension that stemmed from a positive drug test for EPO surrounding his previous fight – a TKO loss to Henry Cejudo at UFC on ESPN 1 in January 2019.

In the opening round, ring rust didn’t appear to be a contributing factor while Dillashaw switched stances in vintage form. A flying knee attempt sent Sandhagen toppling over Dillashaw. As he slipped over the back, Sandhagen nearly locked in an inverse triangle – but Dillashaw escaped.

Sandhagen went airborne and transitioned into a triangle 😳 #UFCVegas32 pic.twitter.com/Py5j4L5Jbw

The first round was closely contested. In Round 2, however, Sandhagen began to take over. He split Dillashaw open with a hard flying knee, a counter shot he landed often throughout the fight.

Though the doctor checked the pulsating cut, Dillashaw was allowed to continue. Through the rest of Round 2, Sandhagen seemed to be a step ahead – momentum he carried into the opening minutes of Round 3.

The third round saw Dillashaw land a series of leg kicks, that took their toll on Sandhagen. Against the fence, Dillashaw utilized his clinch work until time expired.

In the championship rounds, both fighters had their moments. Dillashaw seemingly found a second win, while Sandhagen kept up his high-output pacing. When the judges’ scorecards were read, Dillashaw earned two of the three nods.

After the fight, Dillashaw called for a shot at the winner of UFC bantamweight champion Aljamain Sterling vs. Petr Yan – or a top-five opponent.