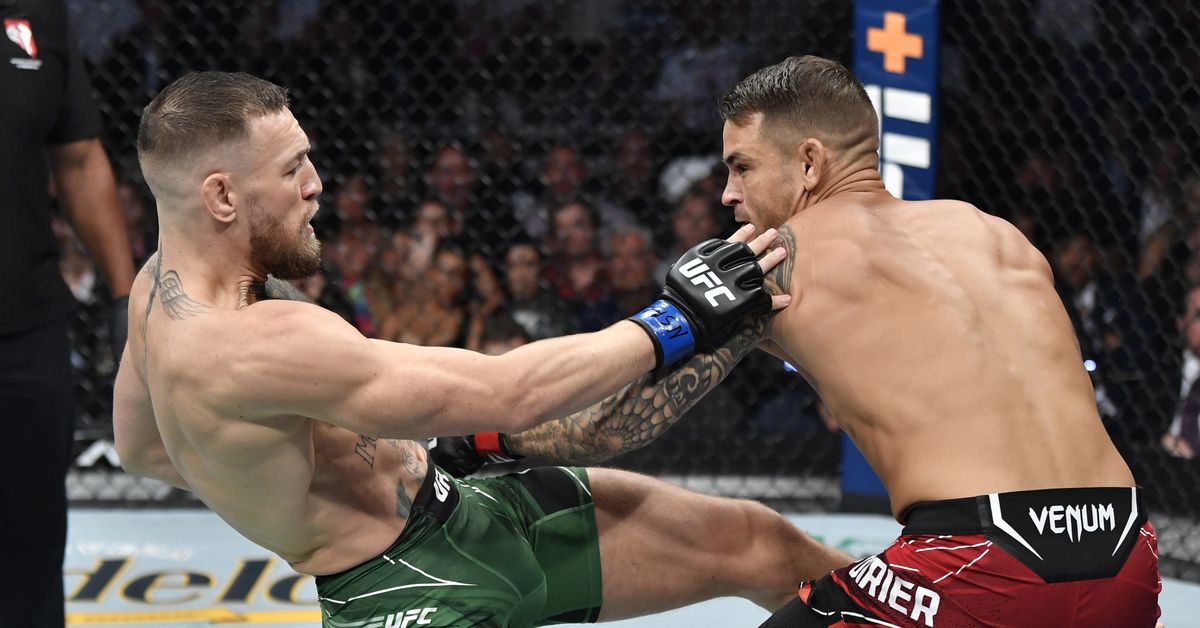 Dustin Poirier walked out with his hand raised in his latest encounter with Conor McGregor, but he definitely felt the effects of the fight after.

During an appearance on American Top Team’s Punchin’ In podcast, Poirier went into detail on how the kicking exchanges between himself and McGregor at UFC 264 last month took a toll on both of them. In fact, for the first time ever, Poirier says he experienced knee soreness following a fight week due to the unorthodox nature in which he had to counter McGregor’s kicks.

“I’ve been checked by a lot of heavy kickers, but never before have I left fight week and been sore on my actual bone, like my knee was sore,” Poirier said. “Not my thigh or calf, my knee was sore.”

According to Poirier, he wasn’t able to check McGregor’s low kicks in a traditional way, which resulted in his opponent’s kicks striking Poirier’s knee instead of his shin. At some point in the fight, McGregor suffered an injury to his left leg (it’s unclear whether it occurred off of one of the checked kicks, or when McGregor’s leg struck Poirier’s elbow, or at some other point in the contest) and he could not stand by the end of Round 1. In between the first and second round, it was determined that McGregor’s leg was broken and he could not continue.

Poirier believes that McGregor’s kicks landing on his knee could have contributed to the eventual fight-ending injury.

“I just know from getting kicked and kicking so many times over the years that when a kick lands bad I just know it kind of hurts both of us even though it’s hitting my knee, it hurts the other guy a lot more. Just from sparring rounds I just know. There was one kick I turned my knee out a little bit. I didn’t have my weight like a traditional check and I knew that was a bad one for him. I knew that one hurt bad.

“I think it was on top of his foot, but you never know if that could have caused torque on his shin bone and cracked it. I don’t know, he was throwing hard kicks, and a lot of them were hitting my knee. I didn’t get to traditionally check the kicks, but I did turn my knee out and it was bone-on-bone and it was worse for him.”

Though his trilogy bout with McGregor marked the first time that he’d experienced lingering soreness in his knee, Poirier said it was actually Justin Gaethje who gave him the worst leg injury of his career when they fought.

“Gaethje,” Poirier said when asked which of his opponents had the hardest kicks. “He partially tore my quad. In the fight, him not caring about position, throwing kicks as hard as he can just to land them, not worrying about repercussions. No setups.”