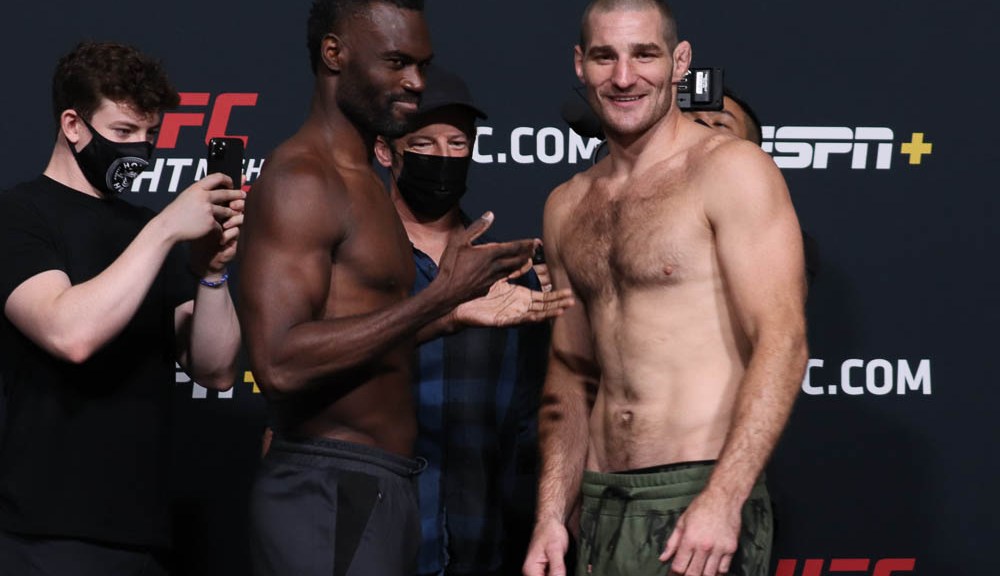 Sean Strickland earned the biggest win of his career thus far on Saturday when he beat Uriah Hall in the UFC on ESPN 28 main event.

Strickland (24-3 MMA, 11-3 UFC) extended his winning streak to five fights in the middleweight division courtesy of a unanimous decision victory over Hall (17-10 MMA, 10-8 UFC) at the UFC Apex in Las Vegas.

With the win, Strickland puts himself in position for another marquee bout at 185 pounds.

Check below for the top Twitter reactions to Strickland’s victory over Hall at UFC on ESPN 28.

I actually sparred with Uriah hall a few months ago, his movement felt awesome. I got my money on him tonight.

Uriah Hall by spinning back kick to the liver

These middleweights are tall , long , rangy and throwing heat ! 🔥

Rough start for Hall. Strickland piecing him up for 99% of that round.

That was Sean’s round but I sense that Uriah started to get more comfortable with Sean’s style. #UFCVegas33

Strickland setting table with jab, wants to eat with right while Hall is looking to land rights off counter. #UFCVegas33 #UFC

Strickland on Hall on the cage trying to land shots, Hall clinches Sean trying to buy himself time to recover. Sean looking for body work, Hall keeps him busy by working the hooks. Strickland keeping Hall on the cage. Sean lands an uppercut on the way out #UFCVegas33

I’d like to see more combos from Sean he has a great jab but I think the combos are going to give Uriah problems. #UFCVegas33

Hall has long jab, he should use it from few inches farther out then Strickland can. #UFCVegas33 #UFC

Strickland takes Round 2, had a dominant first half but Hall started to connect over the last 2:30. Hall needs to keep rolling forward. 20-18, Strickland

I didn’t know who Strickland was before but man I sure do now. Ground and pounding his opponent while telling him to get up because he wants to keep fighting.

Body language from Uriah Hall is terrible. Let’s see what his coach Sayif Saud says to him here between third and fourth rounds.

Uriah Hall survived that round, but he doesn’t exactly look like he wants to be there right now.

Sean doesn’t even care about the sub he just wants to big brother Uriah! #UFCVegas33

Strickland hurts Hall on the feet, then goes for a takedown. Because of course.

Felt like if Strickland didn’t go for the takedown he may have finished him. #UFCVegas33 #UFC

There is nothing flashy about Strickland’s game, but the dude just stays on you, sticks you with clean, frequent jabs, and has grappling in his back pocket if needed. #UFCVegas33

Hell with all that. give that man the stool @ufc

“NOT THE FACE NOT THE F’N FACE” ~Sean strickland 😁@ufc

Such a fun fight !

I’ve seen Sean spar so many times and he is fighting just like he spars. In your face, doesn’t give you an inch and gritty! #UFCVegas33

That was a beatdown. No other way to say it. Sean Strickland bullies Uriah Hall around for five rounds. Credit to Hall for hanging in there the full five, but that was one way traffic. Man. Hall is gonna feel that one tomorrow.

Uriah still makes the same mistakes from years ago that causes him to loss & never able to make an adjustment. It’s so simple too. Strickland has a nasty side jab, walks forward and throws ! Good fight overall. Well good fight for Strickland #UFCVegas33

Sean Strickland just dished out a beating on Uriah Hall. Statement win in the middleweight division. He just mauled Hall and won every round. 50-43, Strickland #UFCVegas33

Where in the hell did this version @SStricklandMMA come from. Great fight and pressure from that young man in the biggest spot of his career! #ufcfightnight

I really didn’t think this fight would be as one-sided as it’s been going. Strickland has landed and has positioned himself for a huge fight after this big win. #UFCVegas33

With that shutout of Uriah Hall, Sean Strickland now has five straight wins and is 4-0 since coming back from a horrific motorcycle accident that destroyed his knee and easily could’ve paralyzed or killed him. Not too shabby at all.