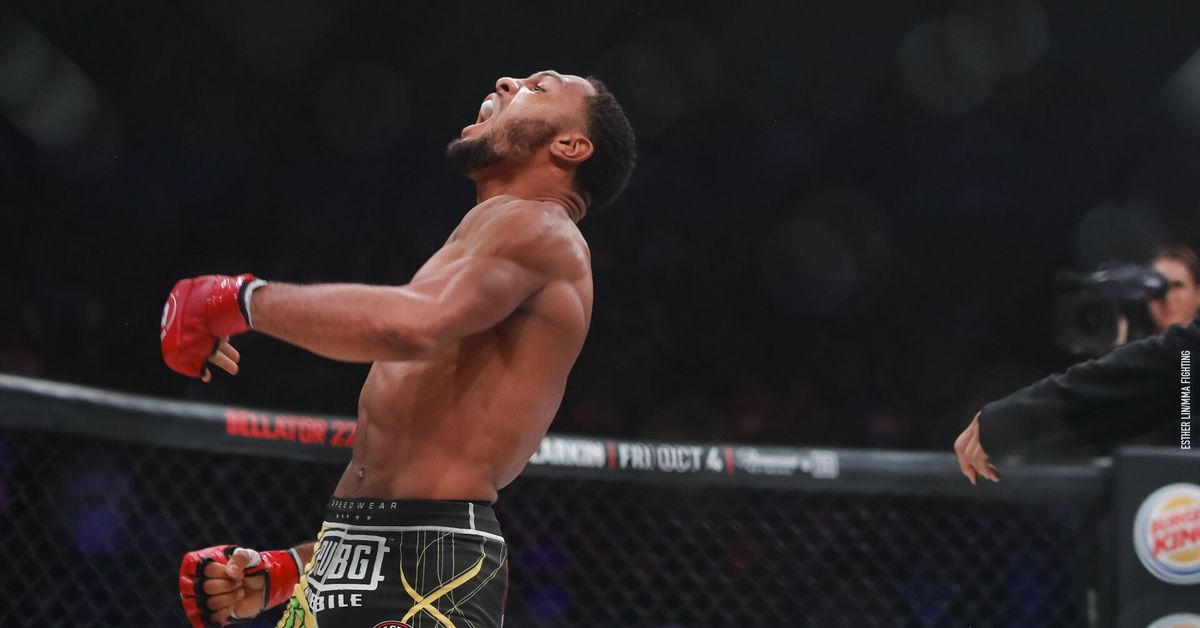 A.J. McKee is as good as advertised.

In one of the biggest nights in Bellator history, McKee (18-0) showed why he should be considered among the best featherweights in the world. The undefeated 26-year-old steamrolled through the most decorated champion in Bellator history, Patricio Freire (32-5), dropping the Brazilian with an early left head kick before submitting Freire with guillotine choke at 1:57 of Round 1. With the win, McKee emerged as the lone man standing from Bellator’s 16-man featherweight tournament and captured its $1 million grand prize, in addition to seizing Freire’s long-held featherweight title.

“All my dreams are coming true. This is amazing,” McKee said in front of his raucous hometown crowd at The Forum in Los Angeles, Calif. “This is just the beginning, so we’re just getting started. I’m looking forward to holding this baby for the rest of my life. It ain’t going nowhere.”

The performance was the culmination of a lifelong journey for McKee that began in his infant years, when the youngster would accompany his father and eventual head coach, 38-fight MMA veteran Antonio McKee, to the gym on a daily basis in the early days of the sport, with young McKee growing up surrounded by Hall of Famers like Quinton Jackson and Tito Ortiz. For McKee, who cruised through Bellator’s bracket with stoppages of Georgi Karakhanyan, Derek Campos, and Darrion Caldwell, Saturday’s main event was a true moment a lifetime in the making.

And he was nearly perfect. After an early feeling out process, McKee slammed a high kick into Freire then swarmed forward with punches and dropped his hurt foe. Mistakenly believing the fight to be over, McKee then walked away celebrating with his hands in the air, before rushing back inside and latching onto Freire’s neck. “Pitbull” never tapped, but he did appear to be out, as referee Mike Beltran stopped the contest with both men still on their feet.

“I felt him go limp a little bit, so that’s what kind of gave me it,” McKee said. “I knew he was already rocked, so I felt him buckle a little bit — I was like, alright, that’s it.”

The loss snapped a seven-fight win streak for Freire that dated back to 2016 and marked the first time Freire lost due to a non-injury stoppage in his entire career. Because he owned two belts, Freire remains the Bellator lightweight champion, although McKee made a point to say in the lead-up to Bellator 263 that he wanted to move up and challenge for Freire’s lightweight belt if he won.

Sanchez was an offensive demon in the bout’s opening stages, unloading on Burnell with blitzkriegs of punches and combinations while the Denmark native hunted for takedowns. Burnell eventually dragged Sanchez down to the mat, and though he was unable to get much offense going once he got down there, that became the pattern of the fight. Burnell scored multiple takedowns in every round and had his best moment in the third frame when he threatened with a back-take, while Sanchez continued to throw punches in bunches any time the fight hit the feet. In the end, Sanchez claimed the striking edge 82-55, but Burnell’s seven takedowns to Sanchez’s zero stole the night.

All three judges scored the bout for Burnell (29-28, 30-27, 30-27), with two even awarding the 27-year-old a baffling sweep on their scorecards. Regardless, Burnell’s record in the Bellator cage moved to 3-0 and he extended his current winning streak to seven straight.

Elsewhere on the card, the coaching crusade of former UFC lightweight champion Khabib Nurmagomedov capped off another undefeated night with a spectacular win by his younger cousin, unbeaten Usman Nurmagomedov (13-0), who knocked out Manny Muro (12-7) in a lightweight contest with a brutal knee to the body at 3:30 of Round 1.

The 23-year-old Nurmagomedov walked out to Khabib’s classic UFC walkout song then did his family name proud, scoring an effortless takedown in the opening minutes and working to Muro’s back, before standing and bagging his highlight-reel finish on the feet.

“I would like to thank my late coach Abdulmanap Nurmagomedov,” he said post-fight through a translator. “I’m very grateful for him, and without him I wouldn’t be here and I wouldn’t be the fighter I am today.”

Khabib’s other fighter on the main card fared just as well, albeit in a much closer call, as Islam Mamedov (20-1-1) eked out a split decision over former Bellator lightweight champion Brent Primus (10-2).

The fight followed a similar pattern throughout all three rounds, with Mamedov scoring early takedowns then spending the rest of the round methodically working from top position while Primus unsuccessfully hunted for submissions from the bottom. Mamedov was unable to mount much effective offense, however his control was enough to sway to two judges to award him the win in his Bellator debut.

The official tallies for the bout were 29-28, 28-29, and 29-28 in the Russian’s favor, making Mamedov the only man aside from Michael Chandler to claim a win over Primus.

Yamauchi put Gonzalez on wobbly legs early with a right hand before dropping him with a wicked left-right combination. A few more follow-up punches was all it took to secure the win at 3:53 of Round 1, marking just the second knockout of Yamauchi’s 31-fight MMA career and his first since 2013. The finish was so unexpected that Yamauchi winning by knockout had upwards of 12-to-1 betting odds on some sportsbooks.

With the win, Yamauchi successfully rebounded from his split decision loss to Dan Moret in April. The 28-year-old lightweight has won four of his last five fights inside the Bellator cage.

Complete Bellator 263 results can be seen below.