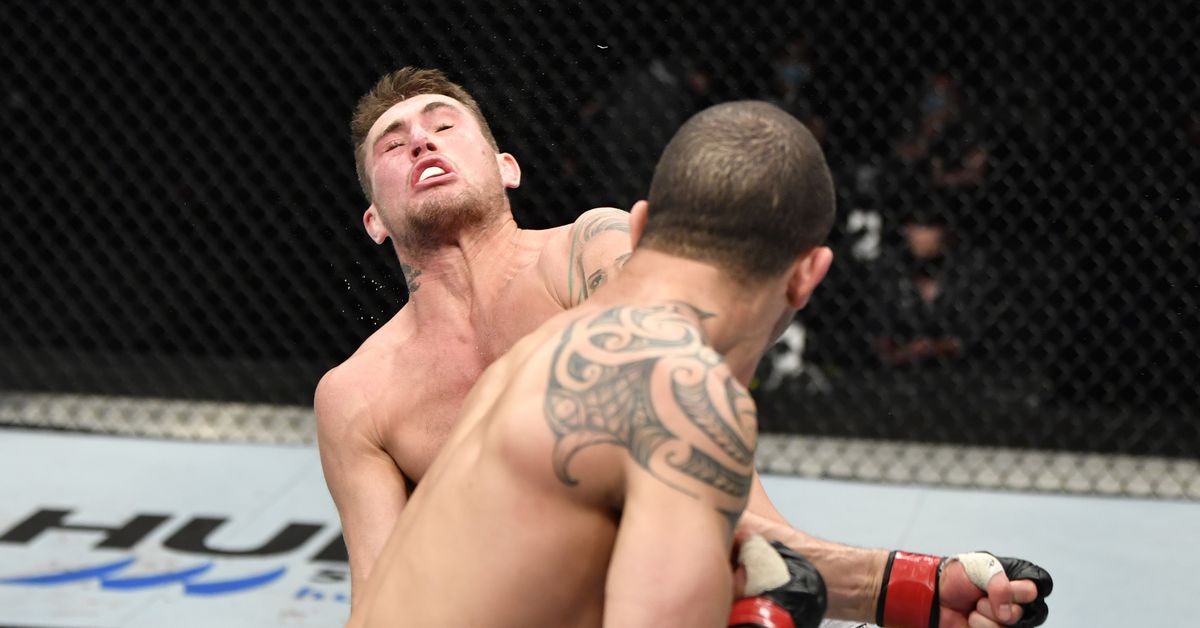 Darren Till has a social media presence like few other professional fighters. I cannot actually load his Instagram page at the moment due to the following controversy, but Till has accrued a substantial amount of followers thanks to his erratic trash talk and general humor. Who can forget his never ending saga with Mike Perry, which enraged “Platinum” to the point of blocking?

Well, it appears that Till may have crossed a line this time. A few days ago, Till posted a meme mocking transgender pregnancy, and based on the absence of his Instagram account, he’s been at least temporarily banned from the platform. In addition, Till’s post was reported to Merseyside Police, who are currently investigating the incident per LiverPoolEcho.

If anyone was expecting an apologetic Till, think again! The British striker later declared himself un-cancelable, and post on his (still functioning) Twitter account in defense of his actions.

“The post got 100k likes,” Till tweeted. “It was a successful day of posting on Instagram I would say… I’ve got a belter post this weekend for u, even more offensive. turn post notifications on!”

This is an odd story, but it somehow fits the pattern of both Darren Till and UFC fighters on social media. For one, this is not Till’s first clash with Johnny Law. He got into a verbal altercation with police officers earlier this year about mask usage, and he also was accused of drunkenly stealing a taxi.

From a bigger picture perspective, UFC fighters are generally less media-schooled than most of their professional athlete peers, which can lead to some … interesting Instagram posts and tweets. Sometimes, this leads to backlash, either from the general public or from UFC itself.

Nicco Montano kind of explains her disastrous weight miss, which will keep her off tomorrow night’s event. Reminder: she used to be a Flyweight!

Leon Edwards vs. Jorge Masvidal has to happen at some point, right?

Dan Hooker vs. Arman Tsarukyan sounds like a fun Lightweight scrap to me!

Henry Cejudo — who, need I remind you, is an Olympic gold medalist — takes a step back from his cringe persona to offer his thoughts on the Simone Biles controversy.

After a long layoff, Jessica-Rose Clark has a return date. If she can stay consistent, she could be a player at 135 lbs.

Per sources, Jessica-Rose Clark (@missjessyjess) will face Joselyne Edwards (@joselyneMma29) at UFC Fight Night on Oct. 23. Interesting test for the 25-year-old Edwards, who is 1-1 in the UFC. Jessy Jess returns from ACL surgery last year.

The purses for Bellator 263 — here’s hoping these athletes on the undercard are doing well with sponsorships!

Someone is going down in UFC Vegas 33’s main event.

With simultaneous punches, the man whose head is further off the center line typically wins the exchange.

I haven’t heard about Guto Innocente in a while, but it would seem he’s still up to his violent kickboxing ways.

Midnight Music: Jordan was playing the tunes tonight, but not even a curmudgeon like myself can hate on No Doubt.