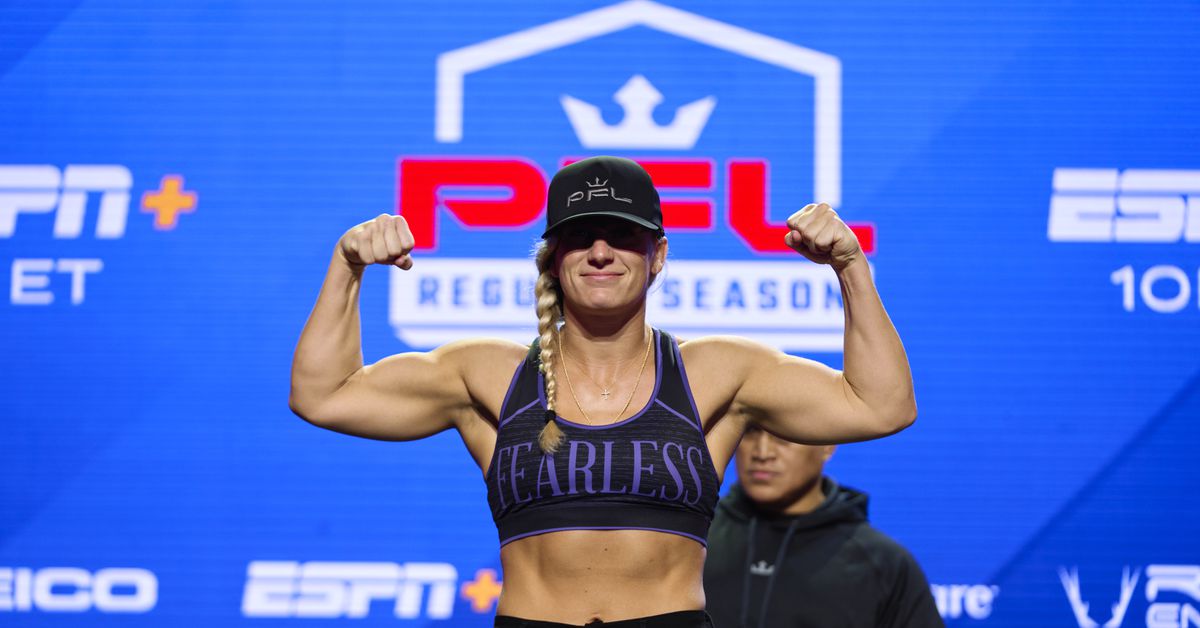 Kayla Harrison has plenty of business to take care of at 155 pounds, but don’t think that she doesn’t hear the calls for her to drop down a weight class.

Two seasons into her run with the PFL, Harrison has unsurprisingly established herself as the woman to beat in the lightweight division. Since Harrison declared that she would pursue a career in MMA following her her second gold medal in Olympic judo in 2016, one of the biggest questions has been whether she could someday cut down to 145 pounds for future fights with the likes of two-division UFC champion Amanda Nunes (Harrison’s teammate at American Top Team) and Bellator featherweight champion Cris Cyborg.

Harrison (10-0) offered a glimpse of what that might look like when she made an appearance for Invicta FC last November, hitting 146 at the scale and going on to defeat Courtney King by second-round TKO. That opportunity came about because the PFL was forced to cancel its 2020 season due to the coronavirus pandemic.

Is there a chance we could see Harrison compete in another promotion when the league enters its off-season later this year?

“Last year was a little bit of a one-off,” Harrison said in a recent interview with MMA Fighting. “I had to fight really hard to make that happen and that was simply because they weren’t having fights and the rest of the world was. As of this year, after the finals this year, I’ll be a free agent, so who knows what’s going to happen?”

With free agency looming, it could be out of the PFL’s hands as to where Harrison goes next. She still has at least one fight ahead of her as she will face Genah Fabian at the Aug. 19 PFL playoffs, with the winner moving on to the lightweight championship finals and a shot at a $1,000,000 prize. It would be the second for Harrison, who was victorious in the PFL’s 2019 season.

Should she part ways with the league, Harrison knows she’ll have more options if she can consistently cut down to featherweight as that division is more established than lightweight for women.

Regardless of whether a farewell to the lightweight division is in Harrison’s future, she doesn’t regret breaking into MMA with the PFL and competing at 155 pounds even if much of her opposition is lacking in name value or, in several cases, primarily known for competing at 145 pounds.

The way Harrison sees it, her efforts along with the league’s have opened up the possibility of another women’s division gaining traction and if one needs evidence, she says to look no further than fellow crossover-combat-sports star Claressa Shields making her way to the PFL.

“Listen, I am very proud of what the PFL and I have done,” Harrison said. “I think that women’s MMA is the fastest growing sport in the world. It’s also one of the youngest sports in the world. We haven’t had as much time as the men have had to develop and I think that I come from an Olympic background where there are seven male weight classes and seven female weight classes and everything is equal. And I look forward to the day when everything is equal in MMA. But you can’t get there if you don’t build it. You know, if you build it, they will come, and it takes people and it takes people going out of their comfort zones and it takes time to grow it and there may not be a not of depth right now, but 10 years from now?

“I look at it like this: Claressa Shields has openly said she cannot make 145. So if there was no 155 in PFL, would we ever see Claressa Shields compete in MMA? And I’m really proud of that. I think that that’s awesome. I love that there’s a place where badass women like Claressa can come and showcase their skill sets. But I know that there is more history at 145, there’s more depth, arguably two of the greatest women fighters of all time compete at 145 right now. So if I have to sacrifice the donuts, I have to sacrifice the donuts.”