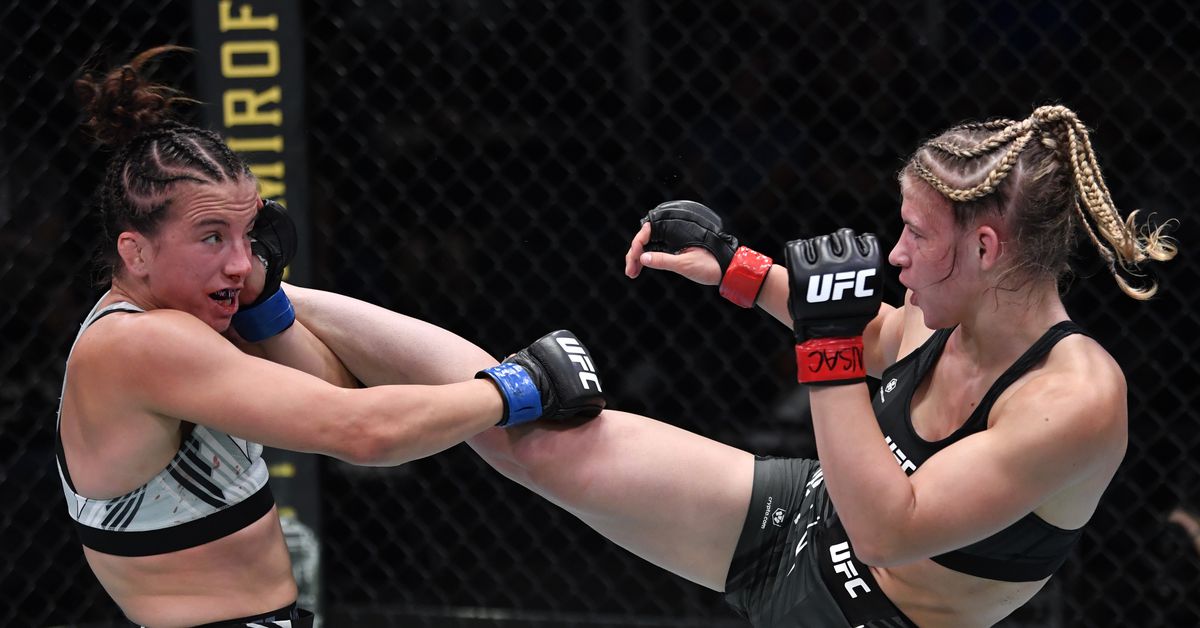 Few things infuriate MMA fans more than a fight being scored incorrectly, though the term “robbery” tends to be thrown around carelessly and is often steeped in bias. With Robbery Review, we’ll take a look back at controversial fights and determine whether the judges were rightly criticized for their decision or if pundits need to examine their own knee-jerk reactions.

For a good 10 minutes on Saturday night, Maycee “The Future” Barber’s prospects weren’t looking too bright.

Coming off of back-to-back losses, Barber was matched up with fellow flyweight prospect Miranda Maverick on the UFC Vegas 32 main card and the predominant opinion leading into the fight was that it was Maverick’s time to steal the shine of the Contender Series signing who had previously made it a goal to become the youngest world champion in UFC history.

That prediction seemed accurate early on as Barber got off to such a slow start that her coach Urijah Faber implored her to, uh, actually try to hit Maverick at some point.

Barber eventually followed that advice, ramping up the aggression in the third and making a fight out of it. The only problem was she had to win at least two rounds, not just one.

Then again, that turned out not to be a problem when two of the three judges actually scoring the fight decided that Barber had done enough to snag a win. Suffice to say, much of the MMA community disagreed.

My timeline agrees with me. Maverick won. Hmm maybe they should check to see if the judges confused the two fighters. Because when I fought Carla, one of the judges gave the first round to her. ‍♀️ #UFCVegas32

Bartender I’ll have 2 of what them judges were drinking, who judged the Maycee Barber vs Miranda Maverick fight #UFCVegas32

These judges got some explaining to do.

Barber later said she she doesn’t see what all the fuss is about, while Maverick simply congratulated Barber on the win and hinted that they could run it back someday.

Until that day comes, this is a decision that’s going to be scrutinized for a long time, so you know that means we had to take this one to the Robbery Review lab.

What was the official result?

How did the fight go?

The first round belonged to Maverick and the last was clearly a Barber round, so let’s briefly touch on those before focusing on the pivotal second.

Barber was a step slow through the first five minutes and, as mentioned above, exhibited her bad habit of throwing strikes from well out of range with no clear purpose. It was Maverick who kept her striking tight and precise, holding the center of the octagon and venturing forward with some nice body work and a few solid punching combinations.

In Round 3, Maverick was still showing disciplined striking. However, Barber found her rhythm late as she had in her previous loss to Alexa Grasso. She put the pressure on Maverick and finally started to hit the mark with her heavier punches. Barber got a takedown she couldn’t do much with, but Maverick was still on the defensive for much of Round 3. Barber even managed to catch Maverick with a spinning back elbow in the last minute.

Now, let’s talk about Round 2. Outside of a quick counter right by Barber, the first minute was all Maverick. She did well with her leg kicks and had Maverick backing away as she threw a few straight punches. Barber was a little busier compared to Round 1, but with the benefit of replay, we can see that so many of her strikes fell short of the mark. Maverick tagged her with another pair of combinations before they clinched up against the fence. The action there was mostly inconclusive outside of a few knees that didn’t look significant.

Barber hit a left hand and nearly scored with a trip, but Maverick had a whizzer secured and prevented Barber from doing anything on the ground. Barber with a nice elbow in the clinch, then she went back to holding onto Maverick in search of a takedown. They ended up in a lengthy stalemate and separated with a little over 90 seconds left in the round. Barber evaded a combination, but then waded into a big left hand. Maverick poked Barber with a couple of jabs, but Barber hit one of her own. Maverick got a takedown and attacked the back, then attacked with ground-and-pound to close out Round 2.

We know that it’s the second round that made the difference, so let’s see how the judges scored it.

What did the judges say?

D’Amato and Hagen gave Round 2 to Barber, Lee gave it to Maverick.

What did the numbers say?

Just going by the numbers, scoring the second round for Barber isn’t outrageous. Maverick won the first round by an easy margin of 18 significant strikes to seven, but in round two that margin was just 15-13 in favor of Maverick. She also scored a takedown in Round 2, but neither Maverick nor Barber were credited with any significant ground strikes in the fight.

Total strikes—which should carry less weight than who scored the most damaging strikes in the fight—were heavily in Maverick’s favor at 82-38.

What did the media say?

According to MMA Decisions, this was a clean sweep for Maverick. All 22 media scores tabulated on that site were 29-28 in Maverick’s favor.

What did the people say?

The fateful Round 2? Indisputably for Maverick as 92.1 percent of voters scored that one 10-9 in her favor.

On the Verdict MMA app, Maverick definitively won Rounds 1 and 2.

That scoring system takes the cumulative total of every submitted fan score (filtering out aberrant scores like random 10-7s if they comprise less than one percent of the total) in every round and divides by the amount of submitted scores to determine the winner of each round and also in totality.

Maverick ended up with an 85-point win in Round 1 and a 71-point win in Round 2, eventually winning by 89 points when accounting for Barber’s successful third. That’s a strong, if not overwhelming margin of victory, with a 100-point difference and above usually indicating a clear winner.

In MMA Fighting’s own poll that asked fans if the judges scored the fight correctly, 84.8 percent voted no.

Do you agree with the judges’ call? #UFCVegas32

If you want to hear even more from the people, check out the replies to that tweet and to our winner’s announcement:

How did I score it?

That second round should have gone to Maverick. I will say, it’s unfortunate that she wasn’t able to land a truly memorable strike. There were plenty of good moments, but without a severely impactful move, you can kind of see how a judge with a bad angle on the action might have missed the work that Maverick did.

Having the benefit of television angles and now a second viewing of the fight, it’s clear to me that even if you don’t think Maverick did a lot in Round 2, Barber did even less. Outside of a nice elbow and the occasional counter, it just looked like Maverick won most of the exchanges.

Was it a robbery?

Yeah, this was bad.

Maybe this isn’t the time to make excuses for the judges, but to repeat my previous point, there is something to be said about being seated there live and having one set angle of the fight compared to being able to watch on television and see everything. Maverick and Barber are both speedy and athletic, and as unconvincing as this may sound, sometimes the judges just miss things.

In a perfect world, they wouldn’t, and that’s what makes this whole process so frustrating. Saturday’s trio of controversial bouts (see also: T.J. Dillashaw def. Cory Sandhagen and Raulian Paiva def. Kyler Phillips) featured some familiar names, but the much-maligned Chris Lee is the one judge who scored this fight for Maverick and while D’Amato may have made a mess of this one and the main event, he was the lone judge who correctly gave Kyler Phillips a 10-8 score in the first round of his eventual majority decision loss to Paiva (a score that would have made the fight a draw if at least one of the other two judges had agreed with it).

So we’ve got some consistency issues to deal with, some misunderstanding of the criteria, and in some instances, outright incompetence, and all of that added up to a classic Fight Night that was somewhat marred by controversial judging. Especially in the Barber-Maverick fight.

Was Maycee Barber’s win over Miranda Maverick a robbery?