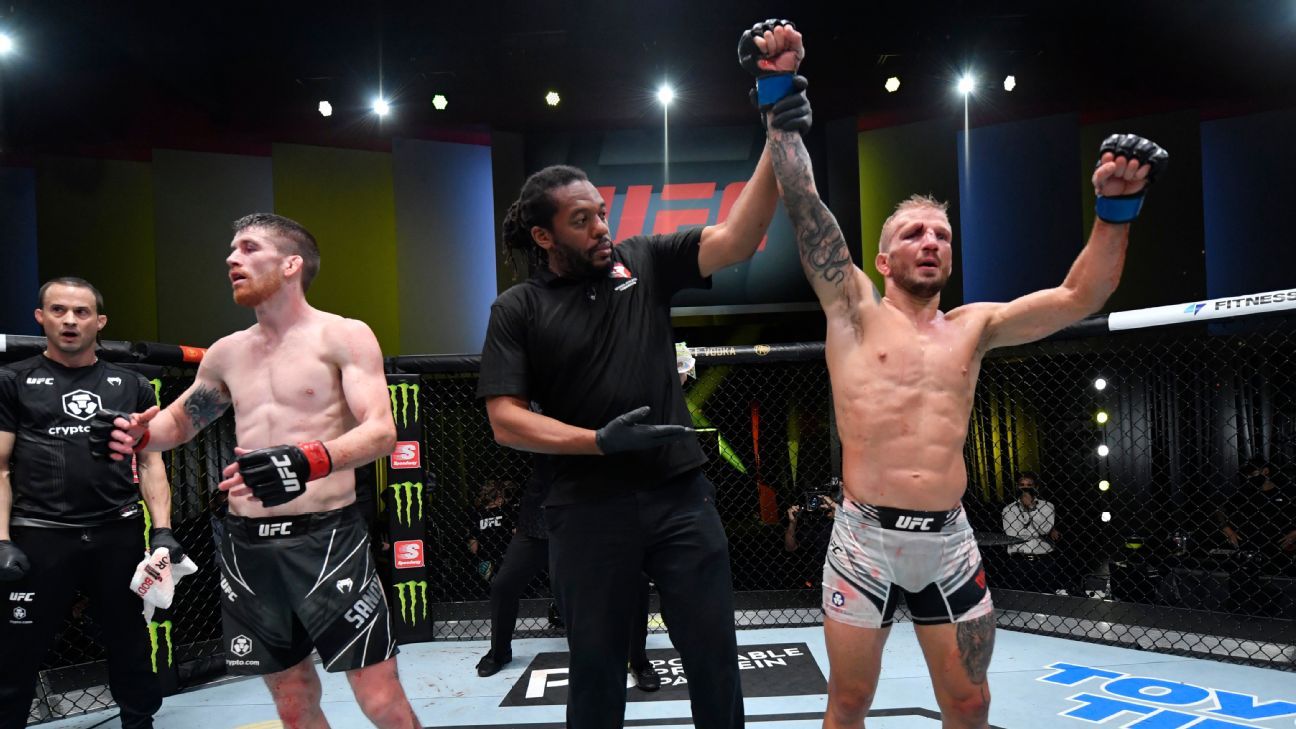 Saturday’s UFC Fight Night main card featured close calls throughout, with a pair of split decisions and a majority decision in the last five fights of the night. The judges had a tough job, but did they get the biggest fight of the night — the high-stakes bantamweight clash between TJ Dillashaw and Cory Sandhagen — right?

As much as Sandhagen-Dillashaw conversations will spill over into this week, there are two upcoming cards to keep an eye on Saturday night.

Uriah Hall has won three in a row. Sean Strickland has four straight wins. Both fighters on the rise look to enter the UFC middleweight title picture on Saturday.

Bellator’s featherweight superfight between two-division champion Patricio “Pitbull” Freire and undefeated AJ McKee claims a brighter spotlight than Saturday’s UFC Fight Night card. The fight may even be big enough to consider the winner the best featherweight in the world.

But don’t sleep on Saturday’s UFC main event. Uriah Hall is on a roll with three straight wins, and stands on the precipice of a big opportunity. Will a fourth straight win, against Sean Strickland — a winner of four straight in his own right — be enough to put Hall directly into the UFC middleweight title picture?

Our panel, featuring Marc Raimondi, Jeff Wagenheim and Carlos Contreras Legaspi, digs into the hottest topics to separate what’s real from what’s not.

Real or not: Cory Sandhagen was robbed by judges in loss to TJ Dillashaw

Raimondi: Most media members who posted their scores on Twitter had Sandhagen beating Dillashaw by decision, according to information compiled by MMADecisions.com. I didn’t tweet my score, but I also thought Sandhagen did enough to win. After a rewatch Sunday, I had Sandhagen winning the second, fourth and fifth rounds — the exact same card that judge Derek Cleary turned in Saturday night. He was the lone dissenter. Judges Sal D’Amato and Junichiro Kamijo scored the bout for Dillashaw.

But a robbery? Absolutely not real. This was a close fight that really came down to one round.

The reason I scored those three rounds for Sandhagen was due to damage — his blows had more effect than Dillashaw’s, in my view. Dillashaw absolutely won the first round. The second round, when Sandhagen opened up a gnarly cut near Dillashaw’s right eye, was clear for Sandhagen. And Dillashaw won the third round on the cards of every judge. That was a fairly easy five minutes to score.

The late rounds are where things got murky from a scoring perspective. I believe the fourth round was the hardest to score. Dillashaw had a great start, landing leg kicks and pressuring. He seemed to be dictating the action. Let’s keep in mind, though, that pressuring and dictating the action are not the primary scoring method. Effective striking/grappling is — and that means impact, meaning the fighter who is landing the most significant, potentially fight-ending blows and submission attempts. Dillashaw was that guy early in the fourth, but I felt Sandhagen stole the round late with some hard shots, including a spinning back fist.

Cleary and D’Amato both had the fourth round for Sandhagen, while Kamijo gave it to Dillashaw. I thought the fifth was a Sandhagen round, because he landed the more damaging blows. Cleary and Kamijo agreed with me, but D’Amato gave it to Dillashaw. Because Dillashaw had won two of the first three rounds — which I agree with — those late-round scores were enough to give him the victory. Cleary was the only judge to give each of the final rounds to Sandhagen. I lean more toward Cleary’s card here.

But to call this a robbery? No, I don’t buy that. The fourth round was close and an argument could be made for Dillashaw in the fifth. This wasn’t a terrible decision, like many we have seen in the past. This was just a close fight, and honestly, MMA is hard to score, especially in real time without the benefit of replay to see how hard things land.

Dillashaw overcame a popped knee in the first round and one of the worst cuts of the year in MMA to look just as strong in the late rounds as he did at the start. That’s commendable. And even though I thought Sandhagen won, Dillashaw shouldn’t be discredited in any way. He fought a tremendous fight.

The winner of PatrIcio “Pitbull” Freire vs. AJ McKee can legitimately claim to be best featherweight in the world

Wagenheim: Yes, this is real, especially if either Freire, the two-division champion, or McKee, his undefeated challenger, puts on a spectacular performance at Bellator 263.

Now, I’m not saying this weekend’s winner will be unquestionably correct in his self-assessment. The UFC’s featherweight champ, Alexander Volkanovski, has a strong case for being No. 1. Ex-champ Max Holloway looked like a world beater in his most recent fight, although his two losses to Volkanovski push him down a couple of rungs on the ladder. And Brian Ortega looked fabulous in his last fight, too, so let’s see what he has for Volkanovski on Sept. 25.

But the Freire-McKee winner will be rightfully emboldened to stake his claim to the top of the mountain because he will have just beaten Pitbull or McKee. That kind of victory is hard to come by in Bellator, which does not have the roster depth of the UFC. Facing a two-time champion who has knocked out Michael Chandler (Freire) or an unbeaten young phenom with six finishes in his last seven fights (McKee) is a rare opportunity to show greatness.

Freire vs McKee is the biggest fight in Bellator history, a matchup of marvelous homegrown talent. It’s by far the biggest fight on a weekend Bellator will be sharing with a UFC event. The title fight will not definitively clarify the 145-pound pecking order across promotions, but it will broaden the conversation. That’s a positive for all involved and healthy for the sport.

Legaspi: Not real. We’ve been waiting for “The Next Anderson Silva” for a long time, and Strickland doesn’t look like a stepping stone at this moment.

Strickland is a technically sound and durable striker who can fight for the full 25 minutes with a high volume of punches, or even surprise Hall with his power like he did with Brendan Allen, who he knocked out in November. That win was all the more impressive after watching Allen on Saturday, as his chin looked strong against Punahele Soriano.

At 36 years old, Hall is on a three-fight win streak that includes a gruesome injury for former middleweight champion Chris Weidman on a checked kick, as well as the farewell fight for the legendary Silva and a split decision against Antonio Carlos Junior. The last two have moved onto boxing and the PFL, respectively.

Hall needs a flashy win to jump up in the rankings and face names like Paulo Costa, Marvin Vettori, Jared Cannonier or Jack Hermansson to earn a title shot.

And even though Strickland is ranked lower than Hall, he has looked really impressive in the Octagon since moving up from 170 to 185, and has recorded four straight wins. Strickland is a really hard fight for everyone in the division right now, and on top of that, Hall may only find a small reward if a victory doesn’t come with a highlight reel finish.