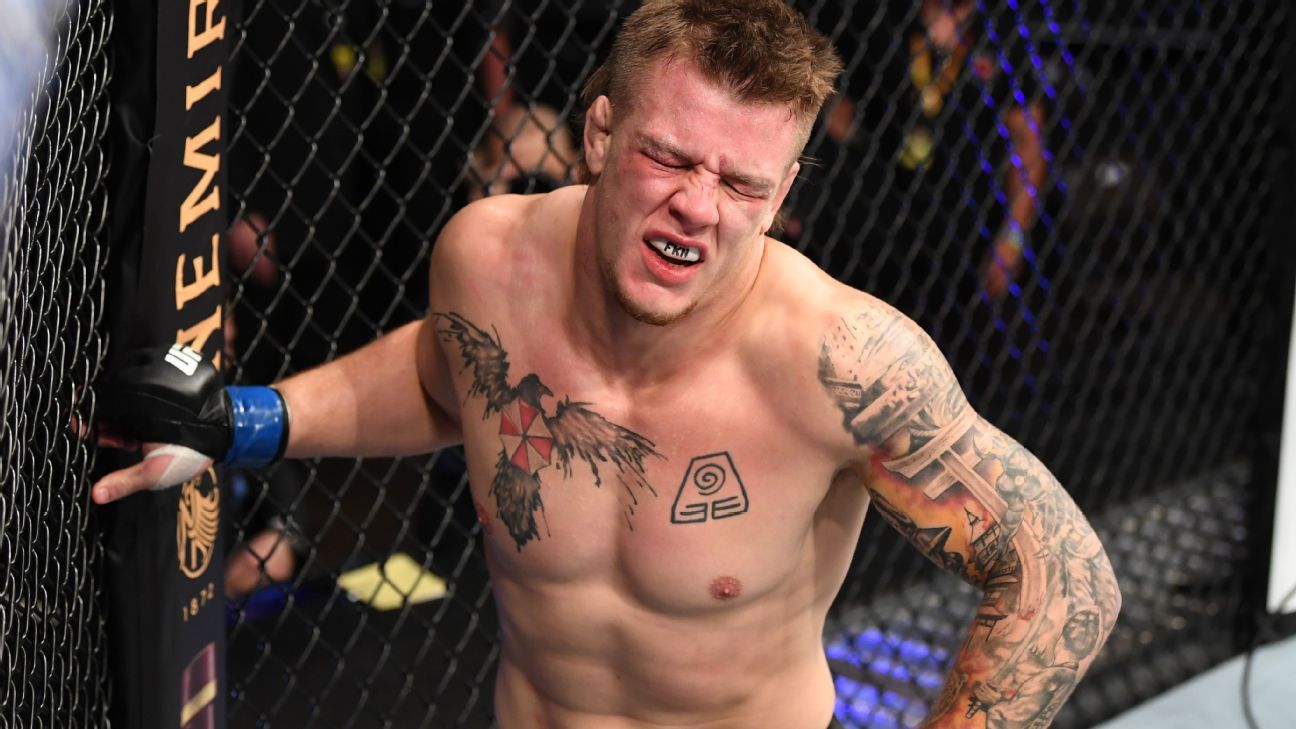 Armed with a new four-fight deal and a freshly-cut mullet, Australian Jimmy Crute has put the disappointment of a controversial TKO stoppage behind him and is reinvigorated about his prospects in the UFC’s light heavyweight division.

For a brief moment earlier this year, when he struggled to process the pain of a doctor stoppage against Anthony Smith, it appeared as though Crute’s UFC career might be over.

Having suffered a perennial nerve injury from one of Smith’s kicks, Crute bravely fought on and was determined to see out the remainder of Rounds 2 and 3. But the doctor deemed him unfit to continue, leaving Crute to question whether the realities of “fight game” were really worth it at the end of the day.

“This sport has the highest of highs and the lowest of lows and I don’t even know if it’s worth it sometimes, that’s something I need to think about,” Crute wrote in an emotional Instagram post soon after the fight.

Asked about that post a few months on, Crute explained his emotions at that time and why the entire experience had helped him uncover a more worrying underlying problem.

“So I was sitting in a hotel room for 14 days [mandatory Australian quarantine], I just felt like I got robbed of an opportunity,” Crute told ESPN. “I’m not going to sit here and say over and over again that I don’t think the fight should have been stopped, but I sort of felt that I got robbed of that opportunity for a fight.

“I felt like I had that taken away from me and then when you get your [fight] purse and half of it gets taken away by taxes, half of it you don’t get because you didn’t win, and you’ve barely made enough to pay for the camp, it’s a bit demoralizing.

“But I think the biggest problem was that it was a big prep, it was six months, and I think I probably only had five days off. I worked so hard and for a very, very long time for that prep, and for it to be taken away like that, it was very disheartening.

“But I am going to be in this sport until the wheels fall off, I’m not going anywhere; I love this sport way too much. And as long [as] I’m smart with my training, I’m going to be around for a very long time.”

Crute maintains he could have fought on with the injury and even beaten Smith, pointing to his takedowns and the confidence that had come from the opening round as it had gone on.

But the 25-year-old Australian understands the decision and retains plenty of respect for Smith, whom he praised in the same Instagram post where he had questioned his own desire to go on.

“I should have changed up the style a bit earlier on in that fight, I was too content with trying to find a shot on him, to find a big punch, whereas I should have pressed the action and gotten a little bit busier,” Crute said of the fight itself.

“You can see even before the injury, I stopped trying to slip the punches and just started walking through them and I started landing a bit more. So there were things I should have done a bit earlier, but that’s the fight game for you.

“Once I felt through the grappling exchanges, I knew that that was the certain path to victory. That was pretty much the plan anyway, to get a hold of him late in the first and then feel if that was the smart move.

“So that was frustrating as the plan was to get into the grappling exchanges late in the first, and then in the second and third, if I felt like I had a big advantage there. But I’m not going to sit here and whine about it; I’m grateful that I got to learn a lot from it.”

After clearing quarantine, Crute said he was back training just two days later with the injury itself actually having few lingering effects.

While the frustration of the defeat continued to linger, it wasn’t what propelled him back into training so quickly.

In a situation remarkably similar to that which countryman and former middleweight champion Robert Whittaker dealt with at the start of 2020, Crute said that something had to change to rediscover his love and the fun of mixed martial arts.

“It [loss to Smith] didn’t really feed the hunger to start ripping in again, it gave me the hunger to start having fun with my training again,” Crute replied when asked if the defeat was fueling his motivation. “For that prep, it was long and grueling and it wasn’t fun anymore. And that has nothing to do with the fight, it was the best I’ve ever felt on fight night; I was moving the best I’ve ever moved, it was the best I’d felt on fight night.

“But by the end of that prep, I didn’t want to do it anymore. I overworked myself far too much. So it was more of a desire to start having fun with my prep, to start trying different things, to be a little bit more free in my training and not so regimented.

“It’s a new lease on life. It’s the best sport but it’s the hardest sport, the toughest sport.

“But as I said it was six months, because of the Johnny Walker fight getting postponed, I maybe had five days off for six months. It was a long grueling process but I learned a lot from that too; I got into the best shape of my life but at the same time my mental state was also a bit drained.”

Crute, sporting a fresh mullet, was back on social media last week revealing he had signed a new four-fight deal with the UFC. While his goal remains the UFC light heavyweight title, he was also happy to have his immediate financial future secured.

“It’s about the belt, but it is also a little bit about money,” Crute told ESPN. “I can’t do this for free, I do this to get ahead; I can go and fight in the pub for free. I’ve always said that I’d fight for free, I just won’t do all the other stuff for free.

“There was a bit of back and forth with the UFC but we came to a good deal, I’m super happy with the way they went about it and they’re super happy with the way I went about it. There was no taking it public; I don’t like it when fighters start to s— can the UFC instead of talking it out man-to-man and working through the deal. So we met somewhere down the middle and I think we’re happy on both sides.”

ESPN’s Brett Okamoto reported shortly after Crute’s post that a fight between the Australian and American Jamahal Hill was being finalized for Oct. 2.

Crute says UFC fans will notice some changes, including the in-vogue haircut he’s sporting up top.

“I rate his striking, I rate his takedown defense,” Crute said of Hill. “I’ve got nothing but respect for the guy, it’s going to be a good little tussle on the feet, but we’re going to work him out.

“You’re going to see a new and improved fighting style from me in my next fight, and I think 80% of that is to do with the growth of the mullet.”