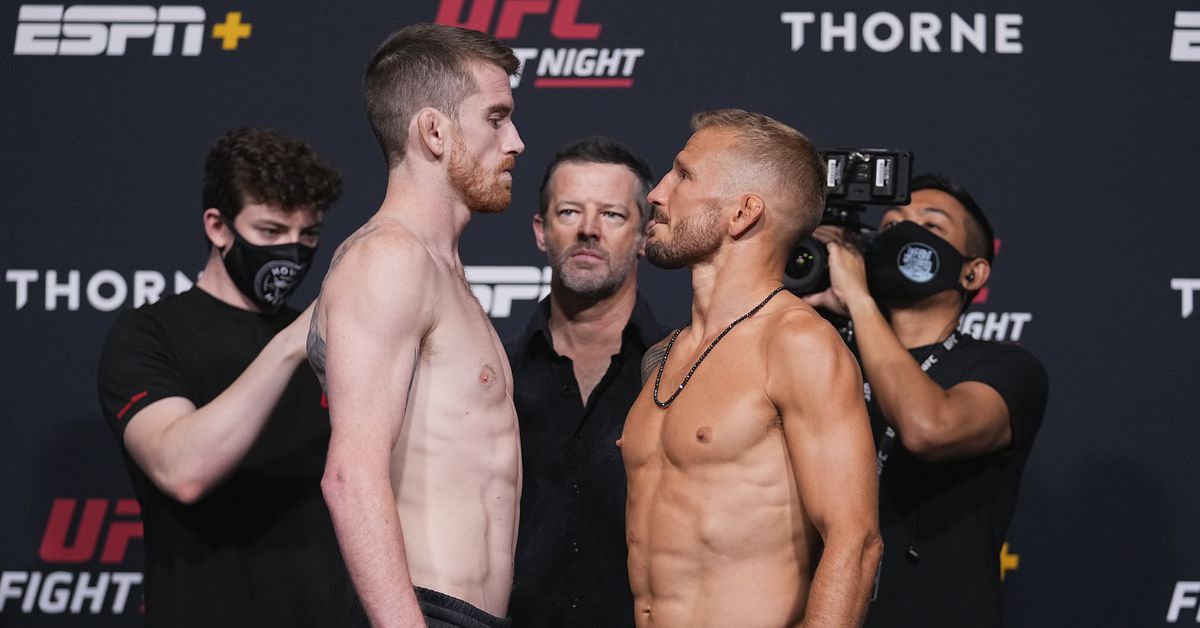 After more than two years away on the sidelines after testing positive for EPO, former UFC Bantamweight champion, T.J. Dillashaw, will make his long-awaited return to the Octagon. While most people remember “Viper’s” last moment inside the cage prior to his suspension, getting starched by Henry Cejudo in a Flyweight title fight, Dillashaw was actually putting in some nice work at 135 pounds before it all came crumbling down. He was on a four-fight win streak, had won eight of nine fights, won the title and defended it twice before losing it to Dominick Cruz. He then won the belt once again three fights later after knocking out Cody Garbrandt and defended it one time after that (again knocking out “No Love”). So while Dillashaw did have to give up the title for fighting dirty, he technically hasn’t been defeated at 135 pounds in five years, which is the reason he has no qualms in claiming this bout is the “real” title fight in the division. Speaking of which, the state of the weight class is murky at the moment. Yes, Aljamain Sterling is the current champion, but he won the belt after Petr Yan was disqualified for an illegal knee at UFC 259 in March 2021. Since then, not much has been seen from either man because “Funkmaster” went under the knife and Yan has yet to fight again. That’s why the winner of this contest should be in line for a title fight.

As for Sandhagen, the man has been on fire since making his UFC debut in 2018, winning seven of his first eight fights with the promotion, with his lone loss coming at the hands of Sterling. In his last two outings, “Sandman” has been putting a hurting on people, scoring back-to-back dazzling knockouts over Marlon Moraes and Frankie Edgar (see them here and here). Sandhagen is perhaps the most unassuming fighter on the roster (aside from Ryan Hall), but the man can pick apart opponents and tear them to pieces in the blink of an eye, much like he did to the two aforementioned former champions. “Sandman” has put it enough work to be in a position to fight for the title, but the promotion felt one more big win was needed. And they don’t get much bigger than taking out Dillashaw. A win over the ex-champion would be huge for Sandhagen’s confidence and career aspirations moving forward. This fight is truly one that sort of has been flying under the radar given all of the Conor McGregor mania over the last few weeks, but it will deliver and could end up being an instant classic.

It’s not a bad card, really. The main event is fire and there are a few intriguing match ups along the way. The event took a big hit when it lost the main event between Macy Chiason and Aspen Ladd (details here), but I would’ve liked to see the promotion book another big fight as the co-headliner even before this fight was given those duties. I get that UFC needs to spread out its talent, but when you have the biggest and best roster in the sport, booking solid co-mains shouldn’t be a problem.

Aaron Phillips and Trevin Jones were in line to fight on this card before Philips withdrew for unknown reasons. As mentioned earlier, the original co-headlining act was supposed to see Aspen Ladd battle Macy Chiason but the fight was scratched last minute after Chiason bowed out with an injury. Also, a Heavyweight fight between Shamil Abdurakhimov and Chris Daukaus was pushed back a week due to COVID-19 regulations.

Raphael Assuncao was set to face off against Kyler Phillips at this event, but was forced out of the bout with a torn biceps. He was ultimately replaced by Raulian Pavia, who now gets his first co-main event slot as a result.

Elise Reed will be the lone newcomer at this event. The former professional boxer-turned MMA fighter has gotten off to a scorching start to her second combat career, winning her first three amateur fights before going undefeated (4-0) as a pro. She made her debut as a professional under the Bellator banner before heading over to Cage Fury Fighting Championships where she won the promotion’s Flyweight title. She will take on Sijara Eubanks in what is a tough first task inside the Octagon on three week’s notice. Though Eubanks has lost two straight, she is still a dangerous threat, especially to someone with potential UFC jitters.

How The ‘Prelims’ Look:

The undercard will be headlined by a Middleweight fight between Brendan Allen and Puna Soriano. Allen is a respectable 4-1 so far in his young UFC career with his lone loss coming at the hands of top-ranked contender Sean Strickland in Nov. 2020. As for Soriano, the rising prospect is undefeated (8-0), including being perfect (3-0) so far inside the Octagon. Seven of his eight victories have come via first round stoppage so the chances of this one ending early and in spectacular fashion are good.

In further 185-pound action, Ian Heinisch looks to bounce back after taking an “L” at the hands of Kelvin Gastelum in his previous bout. All told, Heinisch is just 1-3 in his last four bouts and needs a good showing against Nassourdine Imavov to keep his spot on UFC’s bloated roster. Imavov has a bit more wiggle room despite coming off a loss to Phil Hawes because prior to that setback he had won six straight, including his UFC debut against Jordan Williams.

Randy Costa hopes to up his win streak to three in a row at 135 pounds when he takes on Adrian Yanez, winner of six straight. Yanez is perfect (2-0) inside the eight-walled cage, so Costa is in for a tough task if he wants to keep climbing the ladder. In another Bantamweight scrap, Andre Ewell and Julio Arce will go head-to-head in a battle of combatants who are in desperate need of big wins after they both came up short in their previous bouts against Chris Gutierrez and Hakeem Dawodu, respectively.

And finally, Diana Belbita is simply looking to hang on to her spot on UFC’s roster after coming up short in her first two attempts inside the Octagon. She will battle Hannah Goldy in a Strawweight bout. Goldy is coming off a unanimous decision loss to Miranda Granger, the first setback of her MMA career.

To get a more detailed look at all of the “Prelims” click here and here.

Who Needs A Win Badly:

Once considered to be the next Ronda Rousey, Maycee Barber hasn’t done anything over her last two fights to warrant such comparisons. After winning three straight fights via technical knockout to start her UFC career, “The Future” has now dropped two in a row. In losing to Roxanne Modafferi, her camp blamed a leg injury as a big part of the reason she lost. When she was able to return, she was simply out-gunned by a much better Alexa Grasso, taking even more wind out of her sails. In short, if Barber drops three in a row she will have dug herself a deep hole that will be tough to climb out of. Whatever small push the promotion was trying to give her has now cooled off and it will be non-existent if she suffers three straight losses. She will take on Miranda Maverick who has won five in a row and is two-for-two so far inside the Octagon.

The main event is one of the most anticipated fights of the year, no doubt, but the rest of the card isn’t too bad, either. Long-time UFC vet Darren Elkins will battle Darrick Minner in a Featherweight bout that could be the early favorite to win “Fight of the Night.” And that’s because Elkins always brings the heat … win, lose or draw. As for Minner, he is looking to add to his two-fight win streak by taking out the most experienced fighter he’s ever faced.

Also on the main card, Mickey Gall will look to get back on track following his loss to Mike Perry when he takes on Jordan Williams in Welterweight action. Gall has had some success inside the Octagon, but not enough to make waves. He is 5-3 so far under the UFC banner, alternating wins and losses over his last six fights. That type of inconsistency won’t get him anywhere, so he needs a win — and then a few more after that — against Williams to garner some momentum. Williams threw up a dud in his UFC debut, losing to Nassourdine Imavov at UFC on ESPN 16 in Oct. 2020.

In the revamped headlining act, Phillips looks for his fifth straight win — third inside the Octagon — when he battles Paiva. Philips joined a stacked 135-pound weight class with a 9-1 record, so he needs to rack up some wins in a hurry if he wants to crack the Top 15. It won’t be an easy task against Paiva, winner of two straight, including a big win knockout win over Mark de la Rosa in 2020.

*Fight card, bout order and number of fights remain subject to change due to COVID-19.*

Remember that MMAmania.com will deliver LIVE round-by-round, blow-by-blow coverage of the entire UFC Vegas 32 fight card right here, starting with the ESPN/ESPN+ “Prelims” matches, which are scheduled to begin at 4:30 p.m. ET, then the remaining main card balance on ESPN/ESPN+ at 7 p.m. ET.

To check out the latest and greatest UFC Vegas 32: “Sandhagen vs. Dillashaw” news and notes be sure to hit up our comprehensive event archive right here.