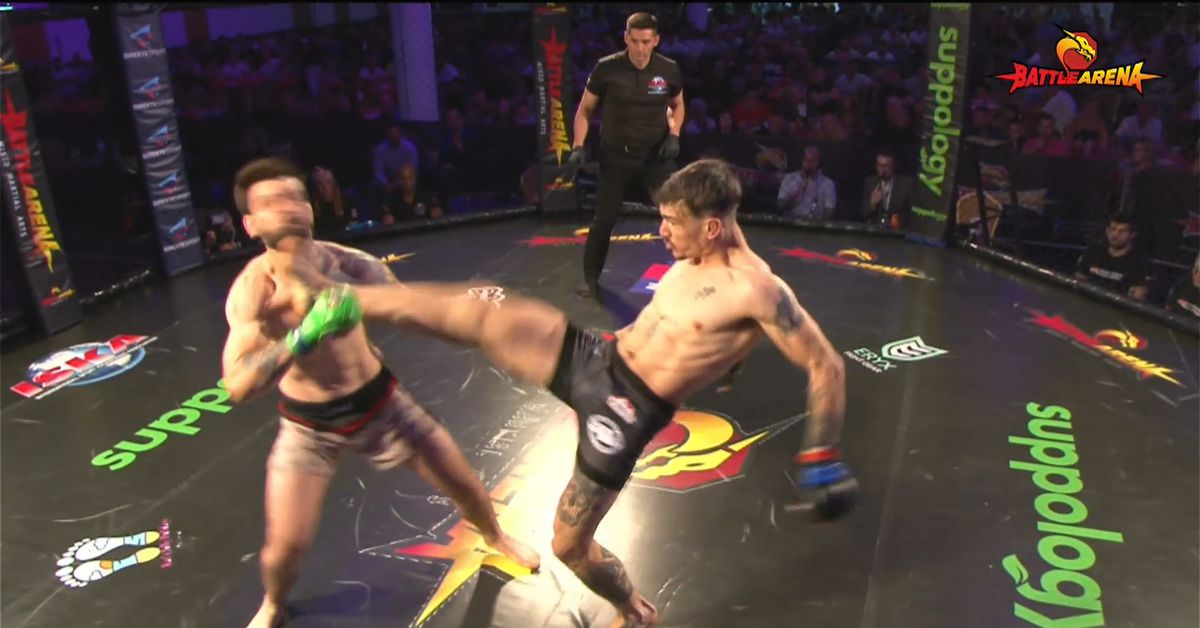 Welcome to the latest edition of Missed Fists where we shine a light on fights from across the globe that may have been overlooked in these hectic times where it seems like there’s an MMA show every other day.

Kicks come in all shapes and sizes in MMA and while I’d like to say that all kicks are created equal, there are clearly some that stand well above the rest.

Anderson Silva’s front kick to the face, Lyoto Machida’s front kick to the face, Edson Barboza’s spinning wheel kick, and Gabriel Gonzaga Cro Cop’ing Mirko Cro Cop are just a handful of the best-remembered kick knockouts in combat sports and dare I say it, amateur lightweight Chrissy Mountford may have just flirted with adding his name to that list.

Clips like this (from a Battle Arena MMA show in Birmingham, England), without context, don’t really tell us much about a fighter and their future prospects, but just based on this animated gif that’s no longer than a few seconds, I’m confident projecting multiple world championships for Chrissy Mountford in the future.

In any other week, the best kick knockout might have belonged to Zayeq Herrera, who landed this beauty at Jasaji Fighting League 25 in Mexico City on Wednesday.

If Mountford was paying tribute to Silva and Machida with his kick, then this was Herrera’s ode to Terror Squad as he hit the Lean Back before taking out Luis Campa.

And we can’t forget kick finishes of the body variety, especially when Aorigele gave us such a great example of one at a Jue Cheng King event in Haikou, China.

The sound and the delayed reaction make for a delightful combination.

By the way, this is obviously not that Aorigele, in case there was any confusion about how everyone’s favorite “Heavyweight Supernova” dropped about 10 weight classes. Let’s just hope that this Aorigele variant becomes famous for his own kicks as opposed to where he gets kicked.

We had more nasty (there’s that word again) submissions at RCC’s event (free replay available on YouTube) in Ekaterinburg, Russia, this past Saturday as Irina Degtyareva and Aleksandr Vasiliev both showed out with methodical performances.

Degtyareva patiently waited for the perfect time to sink in that heel hook and ruin Natalya Dyachkova’s day. As for Vasiliev, his finish was more explosive, but also fascinating to watch as he showed impressive instincts by pouncing on Vladislav Shabalin’s back immediately after stunning him and then casually dismissing a defending hand to set up a rear-naked choke-out.

Magomedgadzhi Sirazhudinov, a 24-year-old bantamweight prospect who improved to 10-1 on Saturday, is no stranger to submission wins, but he didn’t need to show his grappling skills against Maksim Usoyan.

Next, I had to group these two highlights together as they’re both fine examples of fighters hunting for knockouts and refusing to settle for anything less.

From Armia Fight Night 10 (free replay available on YouTube) in Zywiec, Poland, heavyweight Michal Krystman used all of 15 seconds to strike the fear of whatever god that Grzegorz Smolinski believes in into him and then punch and kick it out of him.

At Road Future 2 (replay available on PPV) in Curitiba, Brazil, Joelson Henryke wasn’t having any of Ronaldo Oliveira’s nonsense.

It’s always nice to check in with major promotions that don’t necessarily get their due over on this side of the pond, so let’s see how the fine folks at Konfrontacja Sztuk Walki are doing.

KSW 62 (replay available on FITE TV PPV) featured the emotional return of Andrzej Grzebyk, who suffered a broken leg in his first fight with Lithuanian legend Marius Zaromskis eight months ago. He was granted a rematch with Marius Zaromskis and he didn’t miss his chance to make a moment.

That’s a stunning finishing combination under any circumstances, but given Grzebyk’s story and the fact that he’s one of Poland’s top talents (he has now won 10 of his past 11 fights, with nine of those coming by way of KO/TKO), this should go down as one of the feel good moments of 2021.

Szymon Kolecki’s knockout of Akop Szostak also made me feel good, but in a different way.

How does one say “swangin’ and bangin’” in Polish?

Kolecki, a 39-year-old light heavyweight with Olympic gold and silver medals in weightlifting, improved to 4-0 in the KSW cage and before you ask, yes, he’s already fought and beaten Mariusz Pudzianowski and Damian Janikowski.

And if all of the above didn’t satisfy you, don’t forget to check out the ridiculous knockouts that came out of the Legacy Fighting Alliance’s first trip to Brazil this past weekend:

What was the most memorable Missed Fists moment this week?

If you know of a recent fight or event that you think may have been overlooked, or a promotion that could use some attention, please let us know on Twitter – @JedKMeshew and @AlexanderKLee – using the hashtag #MissedFists.