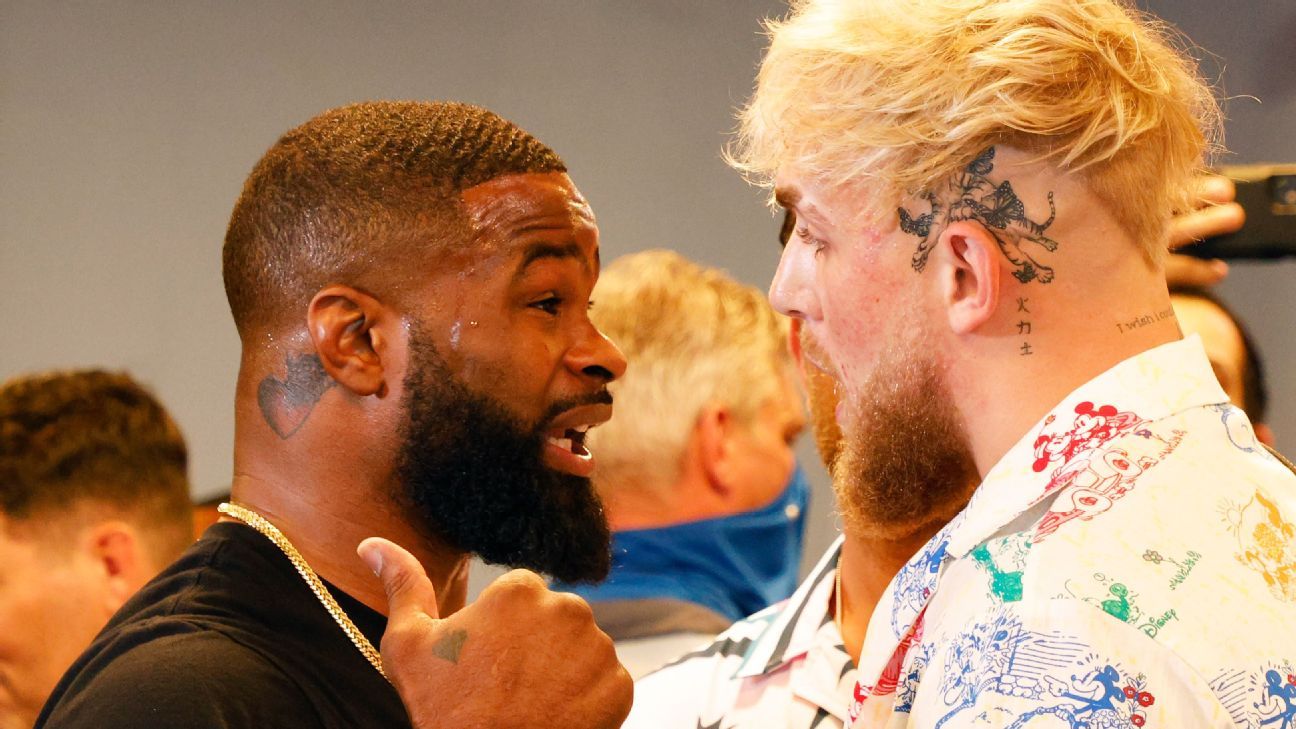 LOS ANGELES — Tyron Woodley was one of the greatest champions in one of the best weight classes in the UFC: welterweight. Now, though, the hard-hitting wrestler is turning his attention to a new sport.

Woodley will meet YouTube-star-turned-boxer Jake Paul in a professional boxing match Aug. 29 in Cleveland, Ohio. It won’t just be a one-off cash grab, Woodley said at a news conference Tuesday to promote the fight. It’s just his first foray into boxing, a new career path.

“This is an opportunity for me to sprint into the boxing lane,” Woodley said. “But also, I’m preparing accordingly. I’m preparing if I was fighting Canelo [Alvarez]. I’m training like that right now.”

Even before the Paul opportunity arose, Woodley said he had discussed being a “true free agent” with his managers Malki and Abe Kawa of First Round Management. That means he’d be looking for opportunities in several combat sports, including MMA and boxing. Woodley’s UFC contract expired following his loss to Vicente Luque at UFC 260 on March 27.

Woodley, 39, said Paul is his first boxing foe but will not be his last. “The Chosen One” has been training in Miami with Pedro Diaz and Eric Brown and has also been in Las Vegas with Floyd Mayweather Jr. Woodley said Mayweather’s team has committed to helping him, especially after Mayweather and Paul had a run-in before Mayweather’s fight with Paul’s older brother, Logan.

“I’m gonna be fighting real boxers and they’re going to have a problem to deal with and it’s going to be me,” Woodley said. “At the end of the day, I’m in boxing right now. He’s my first opponent. This is your first and everybody else’s first chance to watch me box.”

On Tuesday, Paul and Woodley made a bet on stage during the news conference. The loser would have to tattoo the words “I love” plus the name of the winner on his body. Woodley said he believes Paul will want to have a rematch with him after Woodley wins next month. After that, Woodley said he wants to fight a boxing “OG” and then an established current boxer.

“He’s gonna be walking around with a ‘I love Tyron Woodley’ tattoo on his body, so he might as well get it back, try to get a chance to redeem yourself,” Woodley said.

Woodley lost four in a row in the UFC before his departure. Before that, though, he was unbeaten in seven straight fights between 2014 and 2018, one of the best runs ever in the UFC’s 170-pound division. Woodley is a future UFC Hall of Famer, but he said lately he had not been satisfied with his MMA career.

“This is fun for me,” Woodley said. “MMA wasn’t fun for me the last five years. I’m loving [boxing] training. I’m there every day.”

Woodley was a two-time Division I wrestling All-American at the University of Missouri. But the Ferguson, Missouri native said he always thought of himself as a boxer and the sweet science was always a dream.

“I’ve always really been a boxer in a wrestler’s body,” Woodley said. “That’s really been my thing the whole time. I’ve always wanted to box. So, this is just my chance to go out there and have fun, be free and just let these hands go.”