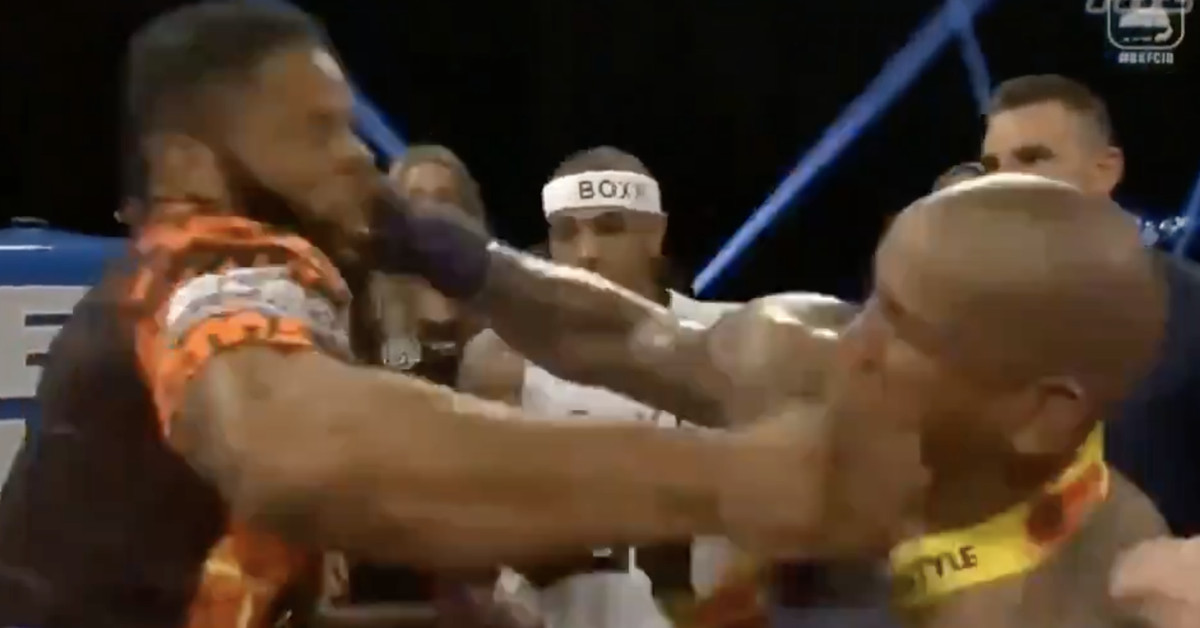 Just seconds after Hector Lombard won the cruiserweight title at BKFC 18, his celebration was cut short when he ended up swinging punches at a potential future opponent after Lorenzo Hunt rushed into the ring to issue a challenge to the new champion.

The melee was broken up rather quickly, but the video showing Lombard flurrying on Hunt with punches quickly went viral for obvious reasons.

That altercation came just a few months after Jenny Savage confronted Britain Hart in the ring following her win over Paige VanZant at BKFC: KnuckleMania, which then led to a fight between them being booked for BKFC 19.

While neither confrontation was orchestrated by the promotion, BKFC President Dave Feldman can’t deny the attention each received, though he’d rather avoid those situations altogether if possible.

“It’s weird,” Feldman said when speaking to MMA Fighting. “I don’t like it. I don’t like the respect factor when they’re doing that, but do I like that we had almost 100 million views on it, so people that never watched or heard about Bare Knuckle Fighting Championships before have heard about this. It’s something we don’t condone. We definitely do not condone. We don’t look forward to [it]. It’s something that we’re going to try to combat as much as possible but if it happens, it happens, and then we’ll deal with it when it happens.

“Look, you get a guy like Lorenzo Hunt, who’s been in there with a lot of our fighters. He lost once, but he looks tremendous now, and going in there against a hot Hector Lombard, who a lot of people don’t know but Hector Lombard actually went into that fight with pneumonia. We didn’t know that but we found out afterward. So you’ve got a guy who’s sick and he’s coming off a war and someone jumps in his face. We don’t ever want that to happen, but you’ve got that testosterone going and things happen.”

While the situation between Lombard and Hunt was particularly bad because punches were actually thrown, the altercation with Hart and Savage eventually led to a matchup that takes place on Friday at Florida State Fairgrounds.

Feldman promises BKFC will never try to create these altercations for the sake of a viral video, but he also understands that fighters are just a different breed, especially in the heat of the moment.

“We didn’t want it to happen,” he said. “It’s unfortunate that it happened, but at the same time, we promoted it after the fact because [it was], I would say not an amazing moment, but an epic moment. It was a moment that went viral. These things are going to happen.

“We’re in combat sports. We’re not in ballet. It’s never going to happen in ballet, but it’s going to happen in combat sports. You get two guys heated at each other and things happen. We just have to combat it as much as we can so nobody is in harm’s way, if you will. At the end of the day, when you’re on the end of Hector Lombard’s punches with bare fists, you’re in harm’s way.”

As much as Feldman will discourage athletes from jumping through the ropes to confront somebody after a fight, he knows the real key to stopping these situations from happening really comes down to ringside security.

It’s a problem Feldman acknowledges has plagued BKFC in the past, and he hopes to improve upon that with the upcoming show on Friday night as well as those moving into the future.

“What we do need to do a better job of at BKFC is not letting fighters in the ring after the fights,” Feldman said bluntly. “If that happens in the dressing room or somewhere else and it’s something we just can’t control, then it happens. We have to do a better job of security around the ring, and we are.”