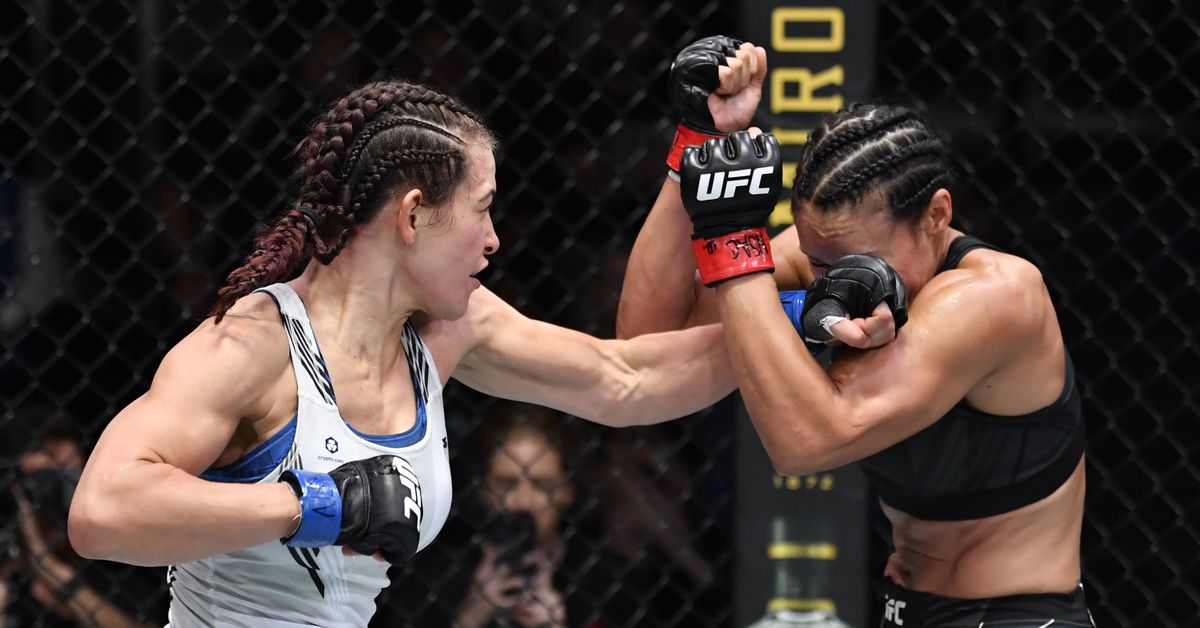 Miesha Tate is determined to win a UFC title again, but she’s also willing to work for it.

Following nearly five years away from the sport after retiring in 2016, Tate came back on Saturday night and looked better than ever as she dispatched Marion Reneau in a dominant performance before finishing the fight by TKO in the third round.

Despite the extended absence from competition, the former UFC and Strikeforce champion didn’t feel any kind of nerves much less any ring rust once she stepped foot in the cage, although it was admittedly an emotional night for her after finally making that walk again after so long away.

“It was like riding a bike,” Tate said about her performance at the UFC Vegas 31 post-fight press conference. “I got a little emotional on the walkout, I did. It was about halfway through, I just remember like I almost felt like I was going to cry like tears of joy.

“Because I was like ‘I can’t believe that I’m here right now’ and this fight has been a year in the making and longer if I really look at the journey before that, before I even decided I was going to come back. Now in hindsight, all of that got me to this point.”

With her win on Saturday night, Tate will undoubtedly find herself once again ranked amongst the best bantamweights in the world but she’s ready to take things step-by-step after making a successful comeback.

“I want to let this victory settle,” Tate said. “I don’t want to be in a rush for anything but of course I’m a woman on a mission here. I do want to get to the top. I think a fight by the end of the year is reasonable. I’m going to go home, I’m going to kiss my babies, I’m going to enjoy this hard earned victory and then in the next few weeks, KHI, my management, my team and everybody else we’ll regroup, we’ll talk to Mick [Maynard], Sean [Shelby], Dana [White] and we’ll get something lined up.”

Because Tate is already one of the biggest names in the UFC, she will most certainly here from plenty of the fighters currently ranked in her division.

In fact before she even competed at UFC Vegas 31, former champion Holly Holm showed interest in Tate’s return while already angling for a rematch after losing to her back in 2016.

For her part, Tate was definitely open to the idea, although the same goes for any of the top fighters currently competing in the UFC’s 135-pound division.

“They’re all fair game,” Tate said. “They can all get it, respectfully. They can all come. I expected them to come out of the woodwork so that’s great. I think a fight with Holly a second time would be great. There’s a lot of women in the division. Name them all. I don’t know where I’ll come in the rankings right now but I’m never one to say I deserve this or I deserve that. I understand I’ve got to continue to climb but whoever’s name on that list to get to the top, that’s fine with me.

“I’m sure Holly and I, I have no doubt about it, before I retire her and I will fight again.”

While her win over Reneau was just the start, Tate feels like she’s put herself into the best possible position to succeed now that she’s healthy and happy in the gym and at home, which makes her that much more dangerous when she’s competing in the cage.

With a world of possibilities in front of her, Tate is ready to seize the moment as she continues her pursuit to become UFC champion again — possibly sooner rather than later.

“I’m just going to do what’s right for me,” Tate said. “This is the first time I can say in my life that I’m the CEO. There is nobody else making decisions. Everybody that’s around me is here to support what I want, my dreams and my goals. So if it feels right, we’ll do it but I’m not in a rush. I want to make the most.

“When I do fight for the title, whoever that may be, it will be the right time and we’ll make sure that we’re ready. We’re not going to rush anything but we won’t miss any opportunities either.”