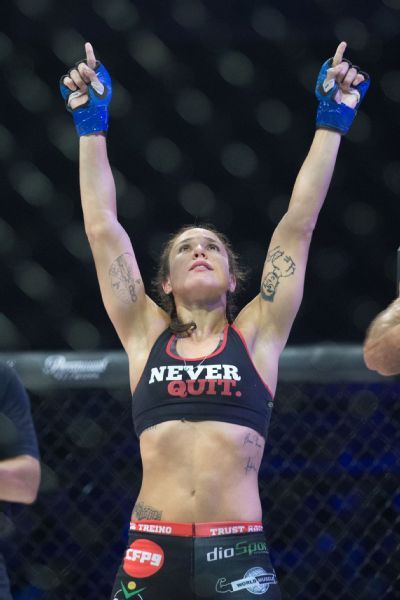 UNCASVILLE, Conn. — Juliana Velasquez retained her rare status as an undefeated MMA champion on Friday night, using a sharp jab and strong footwork to fend off Denise Kielholtz and successfully defend her flyweight title by split decision in the main event of Bellator 262 at Mohegan Sun Arena.

Velasquez (12-0), a 34-year-old from Rio de Janeiro who was making her first defense of the belt she won in December, was on the move for the better part of five rounds, with Kielholtz firing power shots in her direction. The champ, known for her forward pressure, evaded danger on this night by stepping backward or side-to-side. The 5-foot-3 Kielholtz often was too far on the outside to land her offense, and once Velasquez picked up on her timing, she reddened the challenger’s face with her jab.

“I showed here that I can fight on the outside as well and withstand the pressure,” Velasquez said. “I think that’s what also makes a champion.”

All three judges scored the bout 48-47, with two of them favoring Velasquez.

Kielholtz, who is 32 and from Amsterdam, was attempting to become a double champ under the Bellator banner. She is the company’s reigning flyweight kickboxing champion, although she has not competed in that sport since defending her Bellator belt in April 2017. Kielholtz is 6-3 in MMA but came in having won four in a row, earning her title shot with a 43-second KO of Kate Jackson in October.