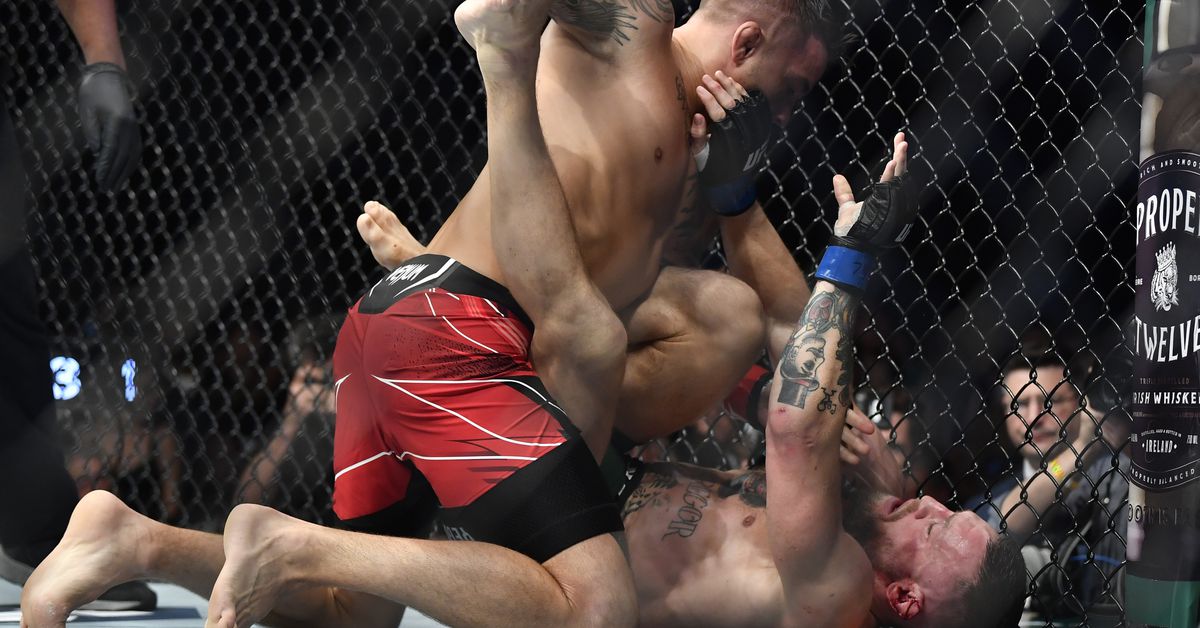 Conor McGregor has called Dustin Poirier’s win over him at UFC 264 “illegitimate,” demanding a fourth fight once he recovers from a broken leg. Not everybody agrees with that assessment.

Former UFC title challenger turned ESPN analyst Chael Sonnen didn’t see much of anything from McGregor in the five minutes he spent in the octagon with Poirier to tell him that booking that fight again was necessary even with the somewhat anti-climactic ending.

“There was nothing within that five minutes that we saw that was competitive,” Sonnen said when speaking with fellow ESPN analyst Max Kellerman. “You used to be able to really count on Conor McGregor, and by the way, I’m not kicking a guy when he’s down, I’m just discussing what I saw. You used to count on Conor to win the stand up portion and [he was a] really hard guy to take down and you could never hold him there if you got him there. These are things you could count on.

Prior to the unfortunate ending where McGregor suffered the broken leg in the closing seconds of the first round, he was largely stuck underneath Poirier eating punches and elbows after he made a failed attempt to land a guillotine choke.

The submission attempt was the result of Poirier backing up McGregor the cage with a blistering series of punches that had the former two-division UFC champion initiating the clinch and turning to his grappling rather than his striking.

“That specific position … the guillotine and pulling guard, that was one of the biggest takeaways I had from the fight because that was so dumb to do,” Sonnen said. “Conor usually gets some compliments. He’s a great martial artist. He’s a very good strategist. That was silly.

“Even if you just go by probability of how many guys in main event fights are being submitted in the first round, I could not believe that Conor sacrificed position or that he thought a guillotine was there, which is nowhere in his arsenal at least historically speaking. I’ve never seen him do this.”

After having surgery on Sunday to place a rod along with plates and screws to stabilize his leg, McGregor is likely looking forward to at least one year or more before he’ll be able to compete again while Poirier is expected to move into a lightweight title fight against Charles Oliveira next.

Even when McGregor returns, Sonnen doesn’t believe he can keep up with Poirier any longer, and the five minutes he witnessed between them this past Saturday night told him everything he needed to know.

“It was hard to see,” Sonnen said. “Conor is a very good fighter — not compared to Dustin Poirier. That’s the only point that I’m trying to make. Conor also had a lack of training. We were told this from his own side, he had a lack of focus. That’s when it was a choice. He was healthy and feeling good, he still chose to follow the distractions instead of the discipline.

“To attempt to guess the regression Conor is for sure going to show if he comes back in 18 months to 24 months as doctors are hypothesizing, things aren’t going to get a whole lot worse. If you leave there damaged, broken, you have two judges calling it a 10-8 round inside of five minutes, it doesn’t get a whole lot worse.”

Already injured. Conor McGregor says his leg was already compromised ahead of UFC 264

Rescheduled. Tyson Fury vs. Deontay Wilder 3 gets a new date.

Lawsuit. Joe Schilling being sued by the bar patron he knocked out in viral video

Is Conor telling the truth or making excuses?

Fighters to know at UFC Vegas 31

I’d touch you up at any weight

17 years between fights is a long time

Thanks for reading and see you on Monday!