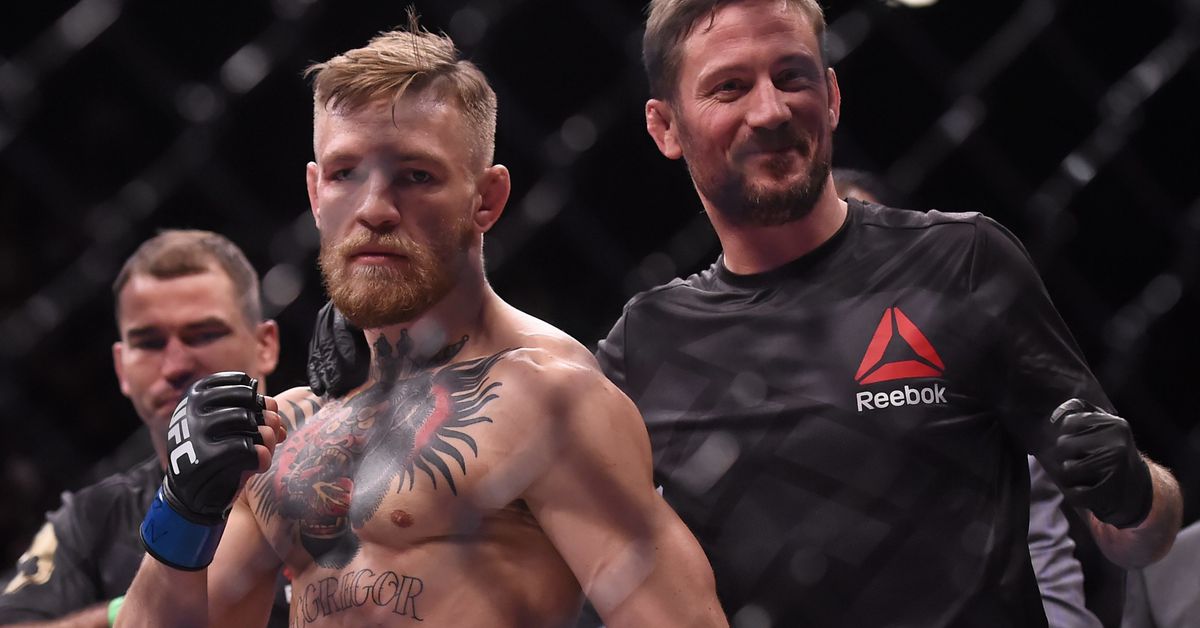 It’s quite safe to say that UFC 264 did not go according to plan for anyone in the Conor McGregor camp. Even aside from the eventual leg break, McGregor ate some big shots on the feet and on the mat, coughing up an arguable 10-8 in what was supposed to be the Irish athlete’s best round.

In the eyes of most viewers, it was a worst-case scenario for McGregor pre-injury, as a majority of what is historically McGregor’s most dangerous period was sacrificed in getting beat up. However, his head coach, John Kavanagh, holds a different view, believing that everything was going to plan for a McGregor finish later in the fight.

If that sounds a bit absurd to you, consider yourself in good company, as former champion Mike Bisping argued that Kavanagh’s extreme optimism is a fireable offense!

“Just like his coach John Kavanagh said, he said ‘oh, I saw nothing that concerned me. I knew that in the second round we were getting the knockout. Nothing else in there concerned me at all.’ If that’s true, John Kavanagh, Conor should fire you immediately,” Bisping said after the bout (via BJPenn.com). “That was very concerning, you were on your back and you were getting dominated. It was a 10-8 round, that’s concerning. You don’t want to get your ass kicked, simple as that and that was what was happening.

“The leg break was unfortunate. But, as I say it gives McGregor an excuse or a reason as to why the fight ended,” Bisping continued. “If that didn’t happen, come on the odds of him turning it around and finishing Dustin in the second round when round one is supposed to be Conor’s best round, it wasn’t good. It wasn’t a good performance.”

With just a single win in the last five years, it’s become clear that whether or not Kavanagh remains involved in McGregor’s preparation, the former champion needs some type of change moving forward. Is this a case of yes men and enablers, or should the blame fall solely on McGregor himself?

Mirsad Bektic entered the UFC roster as one of the most highly praised prospects in the sport, and now he’s retired at the age of 30. No disrespect intended, but it goes to show how crazy this sport is!

Whether talking pay-per-view buys or tv viewers, UFC 264 drew a lot of eyes.

#UFC264 prelims averaged 1.6 million viewers on ESPN, peaking with 2.1 million at 9:55 pm ET, making it the most-viewed UFC event on the network since the “UFC 246: McGregor vs. Cowboy” prelims, according to UFC officials.

Robert Whittaker has been scrapping it out since day one!

I don’t want to like the Paul brothers in any way, but this post from “Pacman”made me laugh.

Raise the guard with the left hook, sneak the uppercut through the middle:

Well … This is frightening!

A really tricky way to score the finish from back mount:

The ultimate stare down: lion vs. crocodile!